The objective of HAIBA is to establish a national database that may serve to underpin efforts to reduce hospital-acquired infections. Postoperative infection is one of the main groups of hospital-acquired infections, and these infections are - to a considerable extent - preventable. In future, HAIBA will report the number of laboratory-confirmed deep infections following THR. For this purpose, HAIBA combines patient administrative data from the National Patient Register (NPR) with results from the Danish Microbiology Database (MiBa). The intention is to subsequently include other postoperative infections into HAIBA.

Deep infections following THR are rare, but very severe complications. They may be caused by bacteria acquired during the operation and, in some cases later in connection with bacteraemia. The majority of these infections present within 90 days following THR.

The risk of having an infection is greater in acute THR, e.g. due to fractures, than in planned surgery. A series of other factors are associated with an increased risk of infection: comorbidity such as e.g. diabetes and inflammatory disorders, proximal femoral shaft fracture, male sex, necrosis of the femoral head and surgery performed at hospitals with a low annual number of THR operations.

Treatment of deep infection consists mainly of surgery supplemented by antibiotic treatment. At any THR operation, systematic screening for infection is usually done by sampling according to Kamme. Five tissue biopsies are taken and sent for culture and resistance testing.

In the USA and the Nordic countries, an increase in the incidence of deep infections following THR has been reported in the course of the past 10-20 years. Possible explanations may be a higher number of operations in comorbid patients and a higher age than previously, a higher occurrence of resistant bacteria in the hospital environment, greater awareness that prosthesis dysfunction may be due to low-virulent infections, and improved diagnostics and registration practices.

Ongoing monitoring may produce insight into areas that can be improved and thereby it may be possible to strengthen the quality of infection control measures and patient safety. Previously, systematic monitoring of deep infections following THR has not been in place in Denmark. A limited number of departments have audited infection clusters. Additionally, the annual report of the Danish Hip Arthroplasty Register presents the number of revisions made due to deep infection. Notification to the Danish Hip Arthroplasty Register is done electronically.

The advantage of the HAIBA is that it includes numbers for all Danish hospitals, private as well as public, based on a single standardised method including extraction of data from the NPR and MiBa. The numbers are updated every night and reported by month, which makes it possible to follow developments continuously and react to signals that call for further investigation.

The new HAIBA surveillance was developed in collaboration with orthopaedic surgeons with a special interest in deep infections following THR. The Danish Orthopaedic Surgery Society and the Danish Society for Orthopaedic Infection Surgery have approved the case definition.

An infection is registered provided that a relevant re-operation had been registered and at least two of at least three Kamme biopsy cultures have tested positive to the same micro-organism.

The HAIBA numbers are presented online at www.haiba.dk. The site also provides documentation relating to the data used, including the codes used in the case definition. Online and in this issue of EPI-NEWS, infections are presented that have occurred following planned index operations with a follow-up period of 3-90 days, aggregated to the national level. More detailed figures, including acute index operations, a 730 day follow-up period and figures describing the hospital/department level will be made available to the individual regions pending further agreements to this effect.

The algorithm has been assessed and compared with existing surveillance systems for infections following primary THR, and comparisons have been made to three reference sources: (1) a database from the Capital Region of Denmark that registers clinical assessments of infections at the time of the operation (2) the database from the Lundbeck Foundation for fast track hip and knee surgery, which is based on manual assessment of discharge summaries for the identification of infections, and (3) an advanced computer algorithm published in connection with a PhD project on Funen, which was supplemented by manual assessment of patient records.

These validation studies demonstrated a high degree of overlap between the HAIBA algorithm and the reference data (specificity 99.6% and sensitivity 65.3-88.9%). The discrepancies between the HAIBA and the reference data were due to different ways of recording the infections. The highest level of agreement was with the computer algorithm from Funen.

The median monthly cumulative incidence from 2011 to 2015 was 0.93. The incidence varied with the season, and the highest incidences were observed during the summer, Figure 1. The slightly increasing incidence from 2012 to 2015, which is seen in Table 1, was not statistically significant. Furthermore, the risk of infection increased significantly with age. The figures also revealed a higher risk for men, but this did not reach statistical significance. 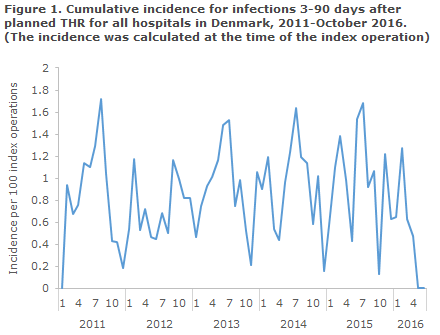 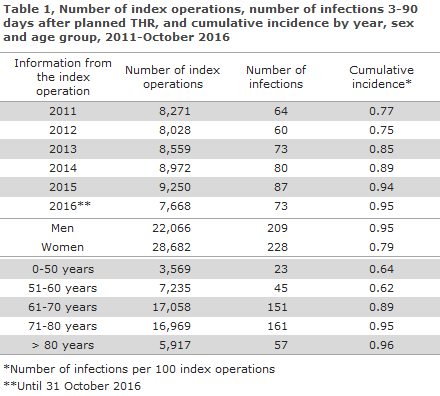 With the addition of deep infections following THR, HAIBA for the first time ever includes an indicator of postoperative infections. Among others, HAIBA’s strength is that data are collected automatically and that data are updated continuously and include data from all of Denmark. Therefore, the healthcare workers in hospitals are not unnecessarily burdened by having to do mandatory registrations.

HAIBA has been validated with reference to various other relevant data sources. Nevertheless, no reference source shows the absolute truth about the occurrence of deep infection following THR, as an element of clinical assessment will always go into the diagnosis. Overall, it may be concluded that HAIBA has developed a meaningful monitoring algorithm. Even so, it should be mentioned that HAIBA cannot be used as a tool for diagnosis of infections in individual patients. Diagnosis remains an individualised process during which each clinician needs to take into account all available items of patient information. For instance, clinical experience shows that some re-operations are associated with clinically certain infections from which negative cultures are made, e.g. because the patient has already been treated with antibiotics during the operation. Such infections will not be detected by the HAIBA surveillance.

HAIBA does not take case-mix into account. Monitoring is therefore not adjusted to take into account specific factors that play a role in the identification of an infection, e.g. the patient’s comorbidity, risk factors, changes in the indication for re-operation, culture and coding practice. This means that data may be used to monitor trends and to identify signals which warrant further investigation. But this also means that caution is needed when figures from different departments are compared as the observed differences may be explained by many different factors.

The observed incidence of infections following THR in the HAIBA is in line with the approx. 1% described in the scientific literature, whereas no straightforward explanation seems to exist for the seasonal variation.

Each hospital only records a limited number of annual cases. Therefore, it makes more sense to follow the overall trends in the national monitoring. Nevertheless, for the individual orthopaedic surgery departments it is, of course, relevant to follow their own figures with a view to initiating measures as needed. HAIBA will therefore make the data available for local use, pending further agreements to this effect.

In collaboration with the Danish Orthopaedic Surgery Society, a process was initiated in which departments of orthopaedic surgery and departments of clinical microbiology explore which tools and presentations are best suited for underpinning the local monitoring and infection control.

This process is very important as HAIBA can only support the infection control efforts if data are meaningful to daily practice and are disseminated in a manner that is actionable.

The Danish National Biobank (DNB) is a health science initiative, a so-called research infrastructure, established to contribute to unique Danish and international research. The DNB was made possible through collaborative efforts counting both private foundations and public institutions. Thus, the sponsors were the Novo Nordisk Foundation (main sponsor), the Lundbeck Foundation and the Danish Ministry of Higher Education and Science.

The DNB premises are located at Statens Serum Institut on Amager; they were built in 2011-2012 and officially inaugurated on 21 March 2012 by the then EU Minister of Research in connection with Denmark’s chairmanship of the EU.

The DNB contains a total of 8 million biological specimens, a number that increases by 1 million specimens annually. The majority of the specimens are fractions of blood samples (serum, plasma and DNA), but with time many other specimen types are also being included, e.g. spinal fluids, faeces and urine. The blood bank’s many specimens are registered and handled effectively by a total of 11 robots that perform pipetting, DNA purification, biomarker analysis and storage at -20 or -80 °C.

The National Biobank Register provides information to researchers about more than 22 million biological specimens in Danish biobanks. By combining data with register information, it is possible to search directly for diagnosis, age, sex and many other variables. Biobanks participate in this initiative free of charge, and researchers may also search the register free of charge. The search facility is accessed via the DNB’s site, where videos are also available with more information and guidance.

Researchers may request biological material from the Biobank, provided their research project has been approved by a research ethics committee.

An example of the use of the DNB is a project on febrile seizures following measles, mumps and rubella (MMR) vaccination. Febrile seizures are a rare but well-known adverse effect of MMR vaccination, the causes of which were poorly understood until recently. The study demonstrated that part of the cause for febrile seizures is congenital and hereditary.

Comparing data from the Danish Vaccination Register (DDV) and the National Patient Register, it was possible to identify children who presented with febrile seizures within a narrow time frame from 9 to 14 days after their MMR vaccination. And thanks to the heel blood samples taken from all neonates in Denmark in connection with the offer of neonatal screening for a series of congenital conditions, biological material from the children was available in the Danish National Biobank.

The analyses demonstrated that DNA variations in two specific genes increases the risk of febrile seizures following MMR vaccination. Both of the genes play a role in the congenital immune response and are of importance for how we counter virus infections. One of the genes, CD46, acts as a receptor for measles virus and the other gene, IFI44L, is activated by interferon signalling, e.g. in response to a virus infection. The precise mechanisms involved in producing the impact of the genes have yet to be elucidated, but in time results from studies like this one can be used in the development of new vaccines or for predicting which children are at an increased risk of suffering from febrile seizures. The opportunity to do studies like the one described above may give Danish researchers and the Danish society an edge in the race to develop individual, customised treatments.