On 4 March 2015, the Hospital-Acquired Infections dataBAse – HAIBA – was launched, EPI-NEWS 9/15. HAIBA presents the incidence of two hospital-acquired infections: Clostridium difficile infections and bacteraemias. Later in 2015, urinary tract infections and some post-operative infections will be added.

The current issue of EPI-NEWS describes the surveillance of C. difficile infections in the 2010-2014 period.

C. difficile is an important cause of diarrhoea and colitis acquired in Danish healthcare, EPI-NEWS 7-8/12. C. difficile infections (CDI) are primarily seen in elderly and chronically ill patients treated with antibiotics (antibiotic-associated diarrhoea).

Furthermore, the bacterium has a special property; it forms spores that can spread via the hands of patients of staff or through contact to unclean surfaces and that may then later be activated as viable, pathogenic bacteria.

Some strains produce special toxins that increase their virulence. It is spreading of the toxin-producing strains that is important for hospital-associated infections and outbreaks. Therefore, the occurrence of CDI is a combined indicator for hygiene and antibiotic consumption. Furthermore, a number of hospitals have faced challenging, aggressive variants of C. difficile, including ribotype 027, EPI-NEWS 7-8/12.

Definition and classification of CDI in HAIBA

The CDI case definition is based on the European definition that was approved by the ECDC, and is thus divided into “Hospital Onset - Hospital Acquired (HOHA)” and “Community Onset - Hospital Acquired (COHA)". CDI is defined through detection of C. difficile in stool samples, either by culture or by PCR. If the test result explicitly states that the C. difficile strain is not toxin-producing, the result is not included in HAIBA. The time of infection onset (= the HAIBA date) is defined as the time of sampling.

COHA are infections, which - in all probability - were acquired during a contact to a hospital, but where the diagnosis was made after the patient had been discharged or following outpatient contacts and management. COHA is defined as a patient with CDI in whom the positive sample was taken from 48 hours to 4 weeks after a hospital contact.

Furthermore, CDI is included if a positive sample was taken within the first 48 hours of an admission and where the patient has had hospital contact within the 4-week-period preceding the admission. The infection is attributed to the department/hospital that had the most recent contact to the patient, or the hospital/department that holds the nursing responsibility for the patient.

In accordance with the ECDC case definition, HAIBA only includes new CDI that presents ≥ 60 days after the HAIBA date of a previous infection. Consequently, repeated detections within this period will only be counted once. The incidence is presented as the number of infections per 10,000 days-at-risk.

As the pathogenic significance of C. difficile in infants is uncertain, CDI is only reported for patients aged 2 years or above. 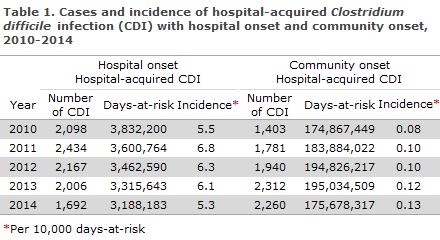 Table 2 presents the annual CDI incidence by region. The HOHA incidence was highest in the Capital Region of Denmark (9.0 cases per 10,000 days) and lowest in the Central Denmark Region (2.8 cases per 10,000 days). If 2014 is compared with 2013, a decrease is observed in the incidence of hospital-onset infections in the Capital Region of Denmark (19%) and in Region Zealand (22%), whereas no significant changes were recorded in the incidence of community-onset infections. 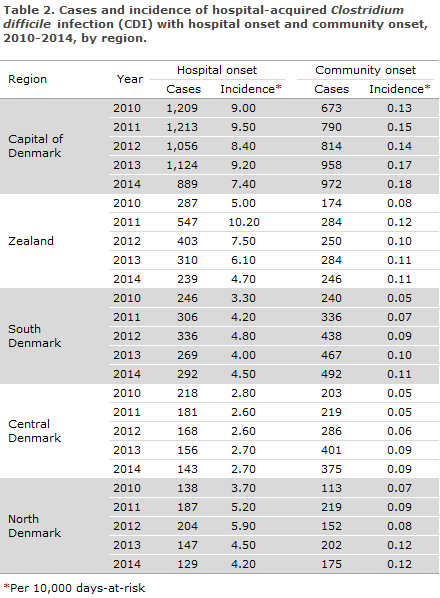 Surveillance of CDI shows that hospital-acquired infection, totalling approx. 4,000 annual episodes, is a frequently diagnosed intestinal infection. Before HAIBA was established, this had not been presented that clearly at the national level. Furthermore, a seasonal variation is seen for CDI, particularly for hospital-onset infections. Several explanations may contribute to this variation, including that outbreaks with norovirus in the winter months may cause spreading of spores in the hospital environment, that more antibiotics are used in periods with many respiratory tract infections, and that the influenza season causes overcrowding of the departments.

As stated in EPI-NEWS 9/15, it is important to be aware of a number of HAIBA limitations. HAIBA is based on computer algorithms. The data that form the basis for the calculations are influenced by the diagnostic methods, rules and traditions for sampling and coding of answers. It is, for instance, not possible to assess on the current basis if the increased incidence of CDI seen in the Capital Region of Denmark compared to the rest of Denmark is owed to a special focus on this problem – including intensive diagnostics – or caused by the special challenges experienced with CDI of the 027 type, EPI-NEWS 7-8/12.

HAIBA is best suited to follow the development at a specific hospital or a number of specific departments. Nevertheless, the decreasing incidence of hospital-onset infections was remarkable: this trend was more pronounced in the Capital Region of Denmark and in the Zealand Region, where several measures have been initiated to counter this problem. Concurrently, a general increase in community-onset infections was observed from 2010 to 2014, corresponding to a 63% increase in incidence.

Several circumstances may explain the increase. An increase in C. difficile microbiological diagnostics among non-admitted patients will contribute hereto. Furthermore, the mean admission time decreased in the period, which contributes to shifting the C. difficile problem from hospitals to the community.

All things being equal, this means that relatively more cases are observed ≥ 48 hours after discharge. The reduction in admission time is also reflected in a decreasing number of HOHA days-at risk, Table 1. Further studies are needed to shed light on these conditions.

If a hygiene organisation identifies an increase in CDI incidence through HAIBA searching, it should collect supplementing data to verify the increase and assess possible causes. On that basis, possible focus areas may be identified. It is our hope that HAIBA may improve the CDI data basis and contribute to strengthening of the control of these infections.