Later in 2015, urinary tract infections acquired in connection with admission to hospital and selected surgical site infections will be added. HAIBA is based on data capture from already existing data sources, and the system therefore does not require that clinical physicians or other healthcare workers spend time on registration and notification.

Hospital-acquired infections are, of course, a problem for the patients who become affected, but the infections also constitute a considerable challenge for Danish healthcare and for society in general. Surveillance of hospital-acquired infections is an important part of a hospitals' infection control. Surveillance may have an independent impact on the prevention of infections, among others because surveillance increases awareness about the infections and any preventive measures. Additionally, surveillance serves other objectives, including the evaluation of trends, identification of need for further measures, assessment of the impact of interventions made, quality assurance and patient safety, contribution to the assessment of the financial consequences of infections and outbreak detection.

Since 2008, Statens Serum Institut has coordinated nation-wide prevalence studies on infections acquired in Danish healthcare, CEI-Nyt  131/15 (in Danish) and the CEI website (in Danish).

Furthermore, some infections are individually notifiable, e.g. MRSA and legionella pneumonia. Finally, several ongoing regional initiatives monitor the prevalence of infections. But before the introduction of HAIBA, no continuous national surveillance of hospital-acquired infections has been in place and we have therefore had no joint and updated overview of this problem field.

In the autumn of 2011, the then Ministry of the Interior and Health (now the Ministry of Health) requested that Statens Serum Institut investigated the possibilities for establishing automated surveillance of hospital-acquired infections.

A pilot was implemented from September to December 2011 based on experiences from Danish and international studies that had demonstrated that it was possible to monitor indicators for some of the most common hospital-acquired infections by merging patient administrative data systems and data on microbiological diagnostics and medicine consumption.

On the basis of the pilot project, funding was provided for the development of a national system for the surveillance of hospital-acquired infections. The system was to be based on existing data, and the results were to be directly employable in the measures implemented against hospital-acquired infections. It was therefore essential that the results could be updated and extracted at several levels, including by clinicians, hygiene organisations and managements of hospitals and regions.

The HAIBA project has now concluded; and as part of the financial negotiations between the Danish government and the Danish regions, it was decided that as from 2015 HAIBA is co-financed as a joint public activity, i.e. through a combination of state and regional funds.

Currently, HAIBA holds information on hospital-acquired bacteraemias, CDI and urinary tract infections and also surgical site infections acquired after Caesareans and knee and hip replacement surgery. In pursuance of an agreement made with the Danish regions, HAIBA data will be made public gradually. Bacteraemias and CDI data will be made public for all via the open eSundhed site as from 4 March 2015.

eSundhed is Statens Serum Institut's portal for publication of healthcare data at the regional, hospital and municipal levels. Data on the remaining infections will be made available later in 2015. Furthermore, publication of the data through the regional quality systems has been planned.

This issue of EPI-NEWS describes the principles of HAIBA. The next two issues of EPI-NEWS will describe data about hospital-acquired CDI and bacteraemia in the 2010-2014 period.

The data sources employed in HAIBA include those of the National Patient Register (NPR), the Danish Microbiology Database (MiBa) and the regional medicine modules. For CDI surveillance, however, surveillance is exclusively based on NPR and MiBa data. In HAIBA, patient courses of admissions are formed on the basis of NPR data. If a microbiological sample has been taken, the date and time of patient's admissions and outpatient contacts are used to classify an infection as hospital-acquired . For CDI, bacteraemia and urinary tract infections, this assessment is based on a 48-hour rule. Consequently, infections confirmed through sampling ≥ 48 hours after admission are classified as hospital-acquired.

Several other rules apply and will, among others, be documented at eSundhed, from where HAIBA may be accessed. For surgical site infections, other principles apply. These principles will be described at a later date.

From the NPR, information is received on in- and outpatients from both public and private hospitals. Data are updated every night. Psychiatric hospitals and departments are not included. The data extraction includes civil registration number (CPR), date and time of admission and discharge, date and time of outpatient contacts and codes identifying the departments, hospitals, diagnoses, procedures and operations concerned. As the NPR displays every admission as a new registration (contact), HAIBA employs an algorithm to define an admission course that may involve admissions to various hospital departments and hospitals. Every night, data will be extracted from MiBa. The specific data vary with infection types. The MiBa data are joined with the NHDR data and data from the medicine modules using the CPR number.

In the HAIBA surveillance tool, users can chose to see national data, or they may limit results to a specific region, hospital or department. Furthermore, it is possible to filter results by ownership type (public or private hospital), Figure 1. Users can specify the period, and you can choose to have the results presented either as a graph or in a table. The results may be downloaded in PDF and Excel format. Users can also link to any report and share the results with others.

Figure 1. The entry page of HAIBA, the Hospital-Acquired Infections Database. Data are available as from 4 March 2015. 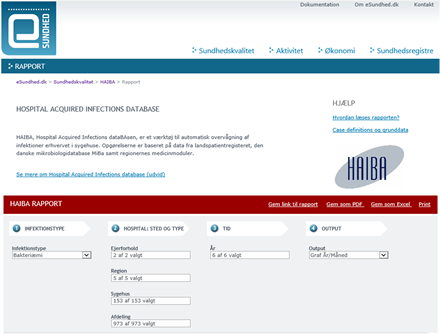 HAIBA is a unique tool because its reports and results are based on the use of existing data and therefore does not require active registration. Furthermore, the system is national and can therefore take into account that some patients are transferred from one hospital to another, and that a patient who is transferred from one region to another may be transferred with an infection. Only a cross-regional system can identify such infections. HAIBA is updated continuously and the user interface is dynamic, which allows for generation of reports from the departmental level to the national level, and the period, etc., may be set as desired. Furthermore, HAIBA covers both public and private hospitals.

It is important to be aware of a number of limitations in HAIBA. Case definitions are based on algorithms, and the classification of infections may therefore deviate from a clinical/microbiological assessment. Consequently, the HAIBA reports should primarily be considered indicators of the frequency of hospital-acquired infections. The number as well as the incidence will be influenced by the methods used for diagnostics and the rules and traditions that exist for sampling and for other diagnostic work-up.

Another limitation is that it is not currently possible to generate reports showing subtypes of micro-organisms, and that the user interface does not support reports filtered by sex, age or underlying condition. Finally, the classification of hospitals and departments depends on the extent to which the regions employ national classification systems. It may therefore be difficult to generate reports based on comparable departments in other regions (as type of department is not defined unequivocally), and, in general, it will not be possible to see data at section level, which is a subdivision of a hospital department. Due to these and other limitations, HAIBA is best used for surveillance of the development in hospital infections over time at a specific hospital or at a number of specific departments.

With the launch of HAIBA, Denmark now has a unique tool that allows us to monitor developments in hospital-acquired infections. HAIBA cannot explain why the prevalence is at the observed level or why changes are observed. But, hopefully, the dissemination of data through HAIBA may trigger discussions on potential explanations and stimulate initiatives that aim to prevent hospital-acquired infections.