In this week, the WHO celebrates the 11th European Immunization Week. The WHO aims to promote vaccinations as an effective means of prevention against infectious diseases, and the week is marked in various ways in each of the member countries.

In Denmark, the Danish Health Authority, the Danish Medicines Agency and Statens Serum Institut have jointly prepared annual reports on the Danish childhood vaccination programme for 2014 and 2015.

Henceforth, the annual report will be published every year in April in connection with the European Immunization Week. The annual report is available from the three organisations’ websites.

Overall, the childhood vaccination programme serves its purpose, but there is room for improvements. The 2015 annual report places a special focus on the challenges associated with the decreasing coverage of the HPV vaccine.

Furthermore, 2015 saw quite a lot of debate about measles in Denmark. The debate was triggered by a major measles outbreak in Berlin and a more modest outbreak in Denmark. Even though only a limited number of cases of measles are seen in Denmark, measles outbreaks may also occur in the future as long as the vaccination coverage does not reach the 95% threshold.

The objective of the childhood vaccination programme

Through the childhood vaccination programme, the Danish authorities strive to protect the individual person against a number of diseases. The vaccination programme also serves to prevent infection from spreading in the community and affecting persons who have not received vaccination, either because they are too young or too ill to receive the vaccine.

Many of the infectious diseases that form part of the childhood vaccination programme will run an epidemic course in unvaccinated populations every few years, but the epidemics can be avoided through a high vaccination coverage in the population. For example, the introduction of the pneumococcal vaccine for children has been seen to provide a certain level of protection against pneumococcal disease, not only in children, but in the entire population owing to the general preventive effect of the vaccine.

The information is disseminated through a number of publications, e.g. the folder The Danish childhood vaccination programme (2015) , the guideline Infectious diseases in children and adolescents - A guideline on prevention in day-care institutions, schools, etc. (2013) and through information campaigns.

Additionally, the childhood vaccination programme is monitored closely, and any reported presumed side effects of the vaccines are analysed continuously in Denmark as well as at the European level.

The main factors taken into account in recent years by the Danish Health Authority when considering if a vaccine should be included in the childhood vaccination programme are as follows:

The severity criterion is given considerable weight when deciding which conditions will form part of the childhood vaccination programme.

The more infectious a condition is, the higher a level of immunity is required in the population to ensure that the condition will cause no major outbreaks.

Measles is one of the most infectious childhood conditions and for outbreaks to be avoided the population coverage must therefore be high. The WHO’s objective for measles is a minimum 95% coverage. Therefore, a minimum of 95% of all children should receive both MMR vaccines. Nevertheless, this objective has not been reached for any birth year since the vaccine was introduced into the childhood vaccination programme in 1987, EPI-NEWS 16/15.

For polio, the WHO assesses that a minimum of 90% of all children should receive vaccination, and this objective has been reached for the three first DTaP-IPV/Hib vaccinations since birth year 2009. And transmission of polio has not been observed in Denmark since 1976.

In 2015, the vaccination coverage of the childhood vaccination programme was as presented in Table 1. 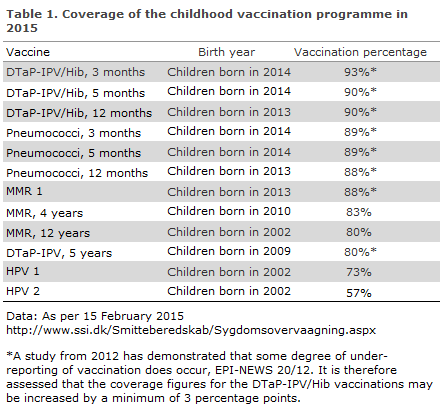 The coverage of the different vaccinations under the childhood vaccination programme varies between the various parts of Denmark. In general, the coverage is highest in West and North Jutland and lowest in the City of Copenhagen and in North Zealand. The largest difference between areas is seen for the HPV vaccinations, where the difference was 14 and 21 percentage points for the first and second vaccination in 2015. (Figures, charts and maps presenting the vaccination coverage are available at www.ssi.dk/data).

As from 15 November 2015, all physicians have been duty bound to report all vaccinations they administer in the Danish Vaccination Register, EPI-NEWS 45/15.

Reports concerning vaccines given under the childhood vaccination programme, except for the HPV vaccine

The increase was associated with the DTaP-IPV/Hib vaccine in particular. Many of the reports were non-serious cases of formation of granuloma, and only a limited number of the granulomas had occurred in 2015. The increase was probably fuelled by the fact that there was a strong focus on this side effect.

A granuloma is an itchy, persisting lump formation at the injection site. Granuloma may result in increased hair growth, a changed level of pigmentation in or eczema in the skin above the granuloma.

Typically, the granuloma presents 3 months after the vaccination, but it may occur anywhere from weeks to years after vaccination. The occurrence of granuloma following vaccination with aluminium-containing vaccines is a rare and, in most cases, not a severe side effect.

29% of the side effects occurred in the 19-30-year age group. Some of these women may have been vaccinated in connection with an extra offer of HPV vaccination given in the 2012-2014 period, or they may themselves have covered the vaccination costs.

A fourth of all reported presumed side effects concerned symptoms from the nervous system. The most frequent symptoms were headache and dizziness, followed by fainting and difficulty concentrating and focusing attention. Other symptoms were also reported, including, among others, fatigue, pain and malaise. Finally, some of the reported presumed side effects concerned symptoms in joints and muscles, e.g. pain and weakness of the muscles.

Establishing the connection between the presumed side effect and the vaccine is difficult at times as the reports often describe a complex disease picture without unequivocally indicating a specific diagnosis.

There was a considerable rise in the number of reports concerning the HPV vaccine from 2014 to 2015. Nevertheless, only approx. 10% of the reports received in 2015 concerned cases in which the side effects started in 2015, see News about side effects, March 2016 (Nyt om Bivirkninger, marts 2016 ).

In this case, the increase may also have been affected by the attention that the HPV vaccine has attracted in recent years.

2015 brought a strong focus and much attention on the HPV vaccination under the childhood vaccination programme - both in the population and among the authorities. This was due, in part, to the decrease in the coverage of the HPV vaccination, and in part to a considerable increase in the number of reports of presumed side effects to the HPV vaccine, and finally to the massive public debate in the press and on the social media concerning girls who presented with unexplained symptoms.

The healthcare authorities therefore took various initiatives in 2015 in relation to the HPV vaccine: intensified dialogue with stakeholders, recommendations for standardisation of work-up of girls presenting with unexplained symptoms, review of reports and more research in this field.

The EMA’s conclusion was based on a thorough review of the published research articles, data from the companies’ clinical trials and reports on presumed side effects from patients and doctors, and on additional data provided by the member countries, including Denmark. The EMA also consulted with a group of leading experts on vaccines, POTS and CRPS, and assessed detailed information received from various patient groups.

By December 2015, the WHO’s Global Advisory Committee on Vaccine Safety (GACVS) also published a statement on the safety of the HPV vaccines. In line with EMA, the GACVS assessed that, based on the existing knowledge, we have no documentation of any safety issues relating to the vaccines that give rise to a change in the use of these vaccines.

Nevertheless, the safety of the vaccines remains under strict monitoring by both the EMA and by the Danish Medicines Agency.

Medical recommendations for the organisation of “single access”
On 1 June 2015, a department in each of the Danish regions was appointed and given responsibility for work-up of persons with unexplained symptoms that had presented in temporal association with the HPV vaccination. By the end of September 2015, Danish Regions stated that the regions had organised these “single access” departments differently. Therefore, Danish Regions recommended that the Danish Health Authority should take an interest in the field by preparing medical recommendations for the efforts made in the departments.

In November 2015, the Danish Health Authority therefore established a broadly based working group. The working group’s medical recommendations for the regions’ work-up efforts were published in February 2016.

Additional relevant research
In the course of 2015, Statens Serum Institut initiated various research projects to enhance our knowledge about HPV vaccination and the groups of girls that report serious presumed side effects to the vaccine and who experience unexplained symptoms, EPI-NEWS 4/16.

One of the projects explores if there are any differences between the group of women who report serious side effects following HPV vaccination and the group that was also vaccinated, but who have reported no side effects. Another project investigates if the consumption of health services prior to HPV vaccination is different in the two groups of girls.

Finally, in October 2015, it was decided in connection with the so-called Sats pulje (Danish government funds) agreement for 2016 to allocate 7 million DKK to research into any side effects associated with HPV vaccination for the 2016-19-period.

By the end of 2015, the offer of free HPV vaccination for women born in the 1993-1997 period was discontinued. This group had been offered free vaccination as part of a so-called catch-up programme.

Globally, vaccines are now being produced by a limited number of large pharmaceutical corporations. Therefore, production problems in a single company can affect the security of supply worldwide.

In 2015, several European countries have experienced problems in providing the needed whooping cough vaccines for their national childhood vaccination programmes. This is due partly to the fact that several producers have experienced production issues with this type of vaccine, partly to several countries introducing cellular whooping cough vaccines, which increases demand.

The European authorities attempt to counter these vaccine supply interruptions by coordinating the supply of vaccines and the demand generated by the EU.
(The Danish Health Authority, the Danish Medicines Authority and Statens Serum Institut)