In week 17, the WHO once again celebrates the European Immunization Week (EIW) , which for the 10th time focuses on the importance of vaccines in the fight against infectious diseases and therefore for public health in Europe. This year, the week aims to promote awareness of the importance of vaccination programmes among policymakers, health professionals and citizens in general.

The EIW overlaps with the World Immunization Week (WIW) celebrated 24-30 April 2015. This year the WIW promotes the theme ”Closing the Immunization Gap”, i.e. ensuring that vaccination is offered equally to everyone in all parts of the world, regardless of any age, geography and socio-economic factors.

Globally, all of the UN's 194 member states adopted a framework plan (Global Vaccine Action Plan) in 2012. In the period leading up to 2020, the plan shall contribute to preventing millions of deaths due to diseases that may be prevented through vaccination by ensuring equal access to vaccination for humans in all communities and from all walks of life.

A new European vaccination action plan (European Vaccine Action Plan 2015-2020) that takes the global plan as its starting point was unanimously adopted at a meeting in the WHO's Regional Committee for Europe in September of 2014. The long-term vision is a European WHO region free of vaccine-preventable diseases, where all countries ensure equal access to financially accessible and safe vaccines of a high quality and to life-long vaccination offers.

This vision is expressed in six main objectives for the region:

Elimination of measles and rubella in Europe by 2015

For several years, the WHO's Europe Region and its member states have worked towards the goal of eliminating measles and rubella in Europe no later than by the end of 2015, EPI-NEWS 17/09 and 16/13. To achieve this goal, a persistent minimum 95% coverage for the two MMR vaccinations is required throughout all of the region's 53 member states. In addition to this high vaccination coverage, all countries shall have in place high-standard disease surveillance and the capacity to respond rapidly to any suspicion of a measles case with diagnostics and secondary prevention in the form of post-exposure prophylaxis through vaccination/immunoglobulin.

To document the progress made in each country, a structure was established based on experiences from the polio-eradication campaign.

This structure includes the appointment of independent national verification commissions for measles and rubella. These commissions are responsible for assessing each country's progress and status quo in relation to the objective of arresting circulation of measles and rubella virus. The national data are collected annually in a report, which is submitted to the WHO and to the independent Regional Verification Commission for Europe (EVC) which carries the supranational responsibility for assessing and classifying each country's status quo in the process towards elimination of the two diseases.

At a WHO meeting held at the end of March, overall feedback was provided from the regional verification committee, based on 2013 data.

As it can be difficult for small countries to find experts that are independent of national diagnostics and of the national vaccination programme, Norway, Sweden and Denmark in June 2014 formed a Scandinavian Verification Committee (SVC) on eradication of measles and rubella.

The committee currently consists of 12 specialists in public health/vaccinology, virology, epidemiology and infectious medicine/paediatrics from the three countries. The specialists have been appointed by the respective national healthcare authorities, but work independently of these.

The committee's primary task is to provide the WHO with an annual report on the status of the elimination of measles and rubella in each country, based on data from the national public health institutes. To ensure complete independence, data from each country is evaluated by four commission members from another country.

The three reports for 2013 were submitted to the WHO at the end of August 2014; and after the above-mentioned meeting at the end of March, the minister of health from each country has received official feedback including clarifying questions and special focus areas. For Denmark, the RVC has assessed that the presented documentation is inconclusive both for measles and rubella as far as the evaluation of the status quo on eradication is concerned, but the SVC has not yet received the detailed assessment for Denmark.

2014 saw a total of 27 notified cases of measles. The age and vaccination status of these cases are presented in Figure 1.

The first case in 2014 was a 12-month-old child in the Capital Region of Denmark, who fell ill in February. Where this child was infected remains unknown. The child had seen both the GP and the emergency medical services, and subsequently 3 children who had been exposed to infection due to this index case fell ill with measles. Furthermore, another 2 children and one adult fell ill with measles which could be traced back to the same index case.

Additionally, 2014 saw 2 cases, who were infected in Pakistan and Eritrea/Europe, but who did not cause any further spreading in Denmark. The majority of those who were infected with measles abroad were unvaccinated.

Finally, in 11 cases infection occurred in Denmark, but in 9 of these cases the source of infection could not be established. However, these "sporadic" cases all occurred in temporal association with other known cases of measles and belonged to the same genotype (B3).

In 2015, 2 cases of measles were reported in Copenhagen in February, both in unvaccinated infants. Both infants were infected with measles virus type D8, which was identical to a measles virus identified in a Swedish tourist after a journey to India where a major measles outbreak with the D8 measles subtype occurred at the end of 2014. This minor outbreak received considerable media attention, among others because a considerable number of persons had been exposed to infection while at hospital. In all probability, the fact that the majority of these persons (approx. 50) were offered post-exposure prophylaxis prevented any further cases.

In the beginning of April, a measles case was detected in an adult unvaccinated man who had travelled in China. Currently, no further infection from this patient has been observed. Virus is of the H1 type and matches a major measles outbreak in China. The development in the prevalence of measles can be followed continuously at the SSI's measles theme (in Danish).

MMR vaccination coverage at end of 2014

Vaccination coverage was calculated at the end of 2014 on the basis of data from the national Childhood Vaccination Database. For some birth cohorts, vaccination was expected not to have been concluded at the calculation date.

Vaccination coverage for the birth cohort 2000-2012 was 88-90%, Figure 1. For the 2013 birth cohort (64%), vaccination was expected not to have been concluded at the calculation date. For MMR 1, the real coverage is expectedly 3-4 percentage points higher than the recorded coverage, EPI-NEWS 20/12. 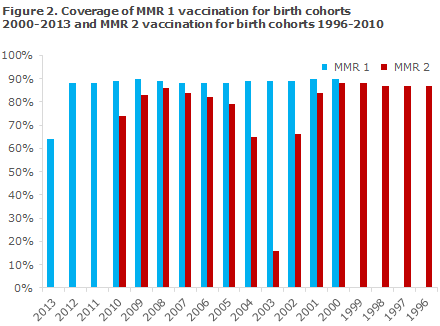 For those who have followed the programme, i.e. the 2004 birth cohort born after 1 April, coverage was 65%. This coverage, however, is artificially low as no correction has been made to adjust for the fact that a fourth of the cohort was not offered MMR 2 vaccination.

The magnitude of any underreporting of the coverage of MMR 2 at 4 and 12 years of age cannot be assessed. For both MMR 1 and MMR 2, data on coverage at country area and municipality levels are available at www.ssi.dk/data, both presented as figures and on maps. Calculation of municipal level coverage is sensitive to the size of municipalities.

Since 15 May, the SSI has sent out reminder letters to parents whose children have turned 2, 6.5 or 14 years and who are registered in the Danish Vaccination Register (DVR) as lacking a minimum of 1 childhood vaccination. Preliminary experiences have shown that the MMR 1 coverage has increased markedly compared with the corresponding cohort of the previous year, EPI-NEWS 4/15.

Furthermore, the Department of Infectious Disease Epidemiology has initiated a study (PhD study) of the causes explaining lacking childhood vaccination. To ensure that the highest possible number of Danish children is vaccinated, it is important to know the causes of delayed vaccination as well as under-vaccination and non-vaccination in Danish families with young children. Specific knowledge of structural and socio-demographic causes is needed to target the information and interventions towards subgroups that are at special risk of lacking vaccinations.

Furthermore, an evaluation is planned of the effect of sending out the above-mentioned reminder letter to parents with children who lack one or more vaccinations in the DVR. This is done by employing the unique Danish national healthcare registers, some of which have not previously been used for this purpose. The project will contribute with knowledge about risk factors for under-vaccination and may underpin and inform future efforts to increase the vaccination coverage in special risk populations.

The primary objective of vaccines is to protect individual persons against the disease in question, but in addition to their direct protective effect, most vaccines also have an indirect effect, herd immunity, the total impact of which will depend on the coverage of the vaccination programme. For measles, which is the most infectious virus, the coverage of the two MMR vaccinations needs to reach a minimum of 95% to ensure that the final approx. 5% who cannot be vaccinated, either because they are too young or too weak, are covered indirectly owing to the vaccination of the majority. This objective has not been achieved for any birth cohort since the introduction of the MMR vaccines in 1987.

The considerable reduction in the measles disease burden which has, nevertheless, been achieved may of course contribute to limiting parents' perception of the risk of contracting the disease, and cause them to focus mainly on the possible adverse effects of the vaccine.

This perception is a healthcare pedagogical challenge requiring balanced information on the risk-benefit ratio, including information about the risk of contracting the disease through chance contact in Denmark or abroad.

Non-immune travellers are at risk of becoming infected and of subsequently introducing measles virus into Denmark. This was seen repeatedly in recent years, and health care personnel are encouraged to ensure that particularly children and adults born after 1974 have received the MMR vaccination to avoid contracting the disease and reintroducing measles into Denmark.
(P.H. Andersen, P. Valentiner-Branth, Lisbet K. Knudsen, Camilla H. Suppli, Department of Infectious Disease Epidemiology, L.D. Rasmussen, Virology Surveillance and Research)