Reminders of lacking childhood vaccinations, experiences after the first 5 months

Reminders of lacking childhood vaccinations, experiences after the first 5 months

Since 15 May 2014, Statens Serum Institut has sent out written reminders to patients whose children turned 2, 6.5 or 14 years old, provided the children lack a minimum of one vaccination in the childhood vaccination programme according to the Danish Vaccination Register (DDV ).

The purpose of this scheme is to increase vaccination coverage to ensure that as few children as possible are affected by serious diseases that may be prevented through vaccination. For several childhood vaccinations, the coverage in Denmark is lower than that observed in the countries with which we are typically compared.

However, it is estimated that the vaccination coverage is underreported by 3-4 percentage points, EPI-NEWS 20/12. The too low coverage of the measles vaccination has contributed to repeated measles outbreaks in Denmark in recent years, EPI-NEWS 4/09 and EPI-NEWS 13/14-13.

Studies among parents have demonstrated that oversight is a frequent cause of lacking vaccination, EPI-NEWS 20/12. It is, in particular, this group of parents that we hope to reach through the reminder scheme. The Danish Parliament (Folketinget) has provided the statutory basis for the SSI's reminders in an amendment to the Danish Health Act and an associated Executive Order.

The basis for the sending out of reminders is information in the DDV on administered vaccinations. The DDV is not perfect, among others because data are extracted from the Regions at a 2-3-month delay. Information on vaccinations may be missing if vaccinations were given abroad, at a hospital or a vaccination clinic, or if the GP or his or her aid has failed to settle the vaccinations or has settled these using an incorrect code.

For more information about the reminder scheme, including examples of the reminder letters sent to parents, please see www.ssi.dk/vac.

In the following, we describe how many children and parents have been comprised by the reminder scheme, how many opted out of the scheme, and which effect the reminders have had on the number of vaccinations given to children who have turned 2, 6.5 and 14 years old in the period from 15 May through 15 October 2014.

We expect that at least a month will pass from a reminder was sent until a child receives any lacking vaccinations; therefore the follow-up period ends on 15 November 2014. Due to the delay in the registration of vaccinations described above, it is presently possible to evaluate only the efforts made until 15 October 2014. As control group, we used children who turned 2, 6.5 or 14 years old in the period from 15 May through 15 October 2013, i.e. the period when the reminder scheme was implemented.

Number of letters sent out

Table 1 shows how many children lacked a minimum of 1 vaccination during the follow-up period, and the number of letters sent concerning these children.

From a total of 35,175 letters sent in the follow-up period, a total of 210 were returned because the recipient was unknown at the address, the mailbox was full, etc., corresponding to 0.6% of the letters sent.

Opting out from the reminder scheme

Parents who do not want to receive notifications concerning vaccination can opt out of the scheme by sending an encrypted mail to the SSI via the borger.dk portal or by filling in and sending a form to the SSI by mail. For more information, please see www.ssi.dk/fravalg.

Number of childhood vaccinations given before and after the reminder scheme

Registration of vaccinations in the Danish Vaccination Register

Even though a child was correctly vaccinated, the parents may receive a reminder. This is because the DDV is based on electronic vaccination settlements with the Region. Nevertheless, the reminder scheme has brought an increase in the number of vaccination registrations in the DVR in the last half of 2014, Figure 1.

Healthcare workers have access to information about vaccinations in the Vaccination Register for the citizens whom they treat, and may therefore introduce any vaccinations that were not previously settled with the National Danish Health Insurance at www.fmk-online.dk.

Parents to children aged 2 and 6.5 years also have access to the vaccination information of their children and may register any lacking vaccinations. Citizen-registered vaccinations shall be validated by a physician to achieve the same status as vaccinations registered by healthcare workers, but they count in the reminder scheme. 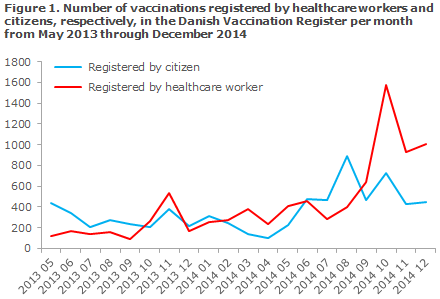 Nevertheless, Statens Serum Institut has received many requests from parents, particularly those who have correctly vaccinated children, who would like to have their information in the Vaccination Register corrected. In these cases, the parents of children aged 2 and 6.5 years have been referred to the SSI's website www.ssi.dk/vac.

The website offers information allowing them to introduce the lacking vaccinations through the Joint Medicine Card at www.fmk-online.dk, if they so desire. Parents whose children are 14 years old and have been vaccinated correctly are not required to do anything and they will not receive any further notifications. They may correct the information when the child turns 15 years old and receives his or her own NemID.

This initial report on the experiences made with the reminder scheme shows a distinctive increase in the number of vaccinations given to children comprised by the reminder scheme. Similarly, the coverage of the childhood vaccination programme has increased by several percentage points for MMR and DTaP-IPV booster vaccination.

The reminders have also led to settlement/registration of previously given childhood vaccinations in the Vaccination Register, which contributes to increasing the calculated vaccination coverage. Thus, so far an increase of 2-4 percentage points was observed in the vaccination coverage of MMR2 and DTaP-IPV booster vaccination among 6.5- and 14-year-olds among the children who were comprised by the reminder scheme.

This preliminary report comes with several provisos. The short follow-up statement may mean that the number of vaccinations may be both under- and over-reported if some physicians do not settle continuously but rather once a month, for instance. Presumably, the numbers are also slightly under-estimated as the follow-up only stops one month after the birthday of the last children within the period. However, it is possible that it may take more than one month from the child's birthday until the parent receives a letter, makes an appointment with the GP and the child is vaccinated.

On the other hand, a decrease has been observed in the number of HPV vaccinations in the period. This may possibly be attributed to the fact that since August 2014 it has been possible to give HPV in a two-dose programme rather than in a three-dose programme if the first vaccine was given at 12-13 years of age, EPI-NEWS 28-32/14. Another contributing factor may be recent extensive media coverage of possible serious adverse events related to HPV vaccination, although it has not been possible to confirm such a risk in scientific studies. Link to HPV folder from the Danish Health and Medicines Authority.

In addition to having a direct impact on the number of vaccinations given, the reminder scheme has also increased the focus on correct registering of vaccinations in the DDV. All physicians will be under an obligation to register all given vaccinations, including travel vaccinations, in the DDV as from 15 November 2015. Executive order on access to and registration etc. of medicinal product and vaccination information (in Danish)

The hope is that full concordance will be achieved in the future between the vaccinations given and those registered in the DDV, and that the vaccination information at www.fmk-online.dk will therefore serve as an always updated vaccination card to the benefit of citizens and healthcare workers alike.
(T.G. Krause, P. Valentiner-Branth, M. Galle, K. Mølbak, Department of Infectious Disease Epidemiology)