Acute and chronic hepatitis B 2015

Acute and chronic hepatitis B 2015

Seven were notified as having been infected in Denmark. Among these, 4 were infected through intravenous drug use (IV drug use), including one while serving a prison sentence. One had been infected through heterosexual contact, one via use of anabolic steroids and in one case the mode of infection was unknown.

In 2015, the Department of Infectious Disease Epidemiology received notification of a total of 305 cases of chronic hepatitis B, Table 1. 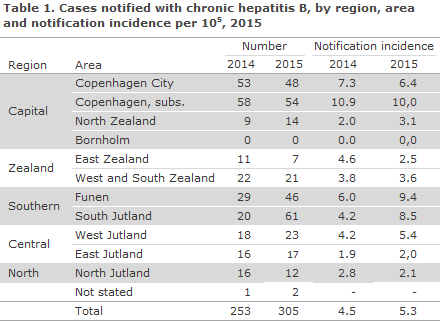 The majority, 269 (88%) were of foreign origin, including 13 second-generation immigrants and 7 adoptees, whereas 36 (12%) were of Danish origin; 9 women and 26 men. The notified persons of foreign origin were distributed on a total of 55 countries, including 80 persons (30%) from South-East Asia. Two children had been notified, aged 3 and 4 years of age, respectively; both had been infected at birth in Pakistan.

As previously and owing to the systematic screening of pregnant women, a considerable preponderance of women of foreign origin was seen, Figure 1. Particularly women from South-East Asia and Eastern Europe were over-represented relative to men, as they comprised 73% and 63%, respectively. In addition to the regions of origin presented in Figure 1, 7 of the notified persons were from Western Europe, 6 from the Indian subcontinent, 5 from Greenland and 1 from Brazil. 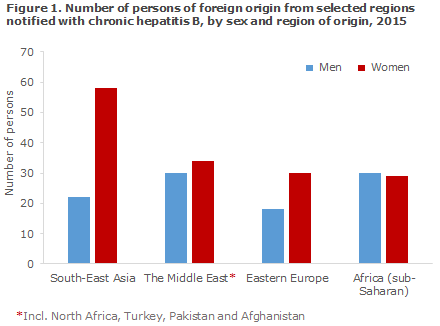 A total of 11 children were infected by their mothers in Denmark; all of these children had been born before the introduction of the general screening of pregnant women in November 2005. Among these were 2 cases of Danish origin and 9 were born by foreign parents in Denmark. The remaining cases of mother-to-child infection were all of foreign origin, including 7 adoptees. No information was available about the vaccination status of these cases.

Nine persons were infected sexually, including 1 in Denmark. Among these, information of hepatitis B vaccination status was available in 1 case. The person had been vaccinated in Pakistan 3 years prior to being notified because a sexual partner had tested positive. The person who received vaccination had not been tested prior to receiving the vaccination.

No persons were notified as having been infected via homosexual contact.

A total of 22 persons were infected via IV drug use, including 16 in Denmark, 2 abroad and in 4 cases the country of infection was unknown. Eleven of these persons were notified from South Jutland.

Eleven were notified as nosocomial infections, including 2 via blood transfusion in Denmark before the introduction of blood screening in 1991. The remaining persons were infected abroad.

The number of notified cases of acute hepatitis B remains very low, Figure 2. Even though some under-reporting is to be expected, infection spreading in Denmark is thus negligible. More than half of the persons who were notified with a known mode of infection were infected via IV drug use. This share is somewhat higher than in the latest years. Like other exposed groups, IV drug users can be offered free hepatitis B vaccine.

It is noted that one of these cases was a person who was serving a prison sentence. The WHO's guidelines recommend that access be given to sterile hypodermic needles, etc., in prisons. 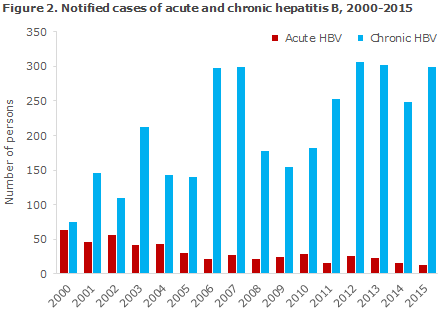 A total of 305 cases of chronic hepatitis B were notified in 2015 compared with 253 cases in 2014. This 21% increase may be explained by a considerable increase in the number of notifications from the Region of Southern Denmark, which consists of South Jutland and Funen. In all, 25 (42%) of the notified cases from South Jutland were tested prior to 2015, but were not notified until 2015, whereas only 8 (18%) notified cases from Funen had been tested prior to 2015.

These figures suggest that part of the increase of notified cases observed in 2015 is due to late reporting of cases from South Jutland, and that more persons than usually were probably tested on Funen. The increase is not attributable to an increased number of refugees as the observed increase in South Denmark occurred mainly among ethnic Danes, particularly IV drug users.

The majority of cases of chronic hepatitis B concern immigrants who were infected prior to their arrival to Denmark. The majority were notified as having been infected at birth; and the majority of those who were notified without information about mode of infection who were born in highly endemic countries were presumably also infected through mother-to-child contact. All adoptees among the notified cases were from highly endemic countries and had resided in Denmark for 18-40 years before being tested.

Three of the 7 adoptees tested positive as part of the screening of pregnant women. Testing persons from highly endemic countries is still recommended, regardless of their sex, at their first contact with Danish healthcare. This recommendation includes adoptees.

Persons from highly endemic countries who have resided for a prolonged period in Denmark and whose status remains unknown shall also be tested, regardless of their sex and clinical picture. Furthermore, we encourage that, whenever a person tests positive for hepatitis B, the person’s sexual partner should also be tested.

Furthermore, testing of persons from highly endemic countries should be considered before giving hepatitis B vaccination as vaccination of an already infected person is without effect, causes a false sense of safety and reduces the person's chances of diagnosis and treatment.

Thanks to the screening of pregnant women for hepatitis B, every year a considerable number of asymptomatic carriers are detected who shall be referred to a specialist department (infectious medicine or hepatology) for further work-up, control and possibly treatment. This is important, not least because today it is possible to treat pregnant women with a high viral load who would otherwise risk inter-uterine infection of their child.

To reduce their risk of mother-to-child transmission during labour, children born by hepatitis B-positive mothers shall be given immunoglobulin and vaccine at birth (so-called post exposure vaccination) and when they are 1 month (e.g. at the 5-week examination), 2 months and 12 months old. In 2016, the childhood vaccination programme is temporarily changed with the introduction of Hexyon, EPI-NEWS 5/16.

The vaccine is given under the programme at 3, 5 and 12 months of age and also protects against hepatitis B. Children born by hepatitis B-positive mothers shall therefore in 2016 receive one Engerix B Pæd at the 5-week childhood examination, after which they follow the temporary childhood vaccination programme.

As post-exposure vaccination does not guarantee that mother-to-child transmission is avoided during labour, the children shall be tested to determine if the vaccine has taken 1-2 months after they have completed their hepatitis B vaccination. A blood sample is taken to establish anti-HBsAg, HBsAg and possibly anti HBc. This is done at the child's GP.

Surprisingly, in 2014 only two persons were notified with chronic hepatitis B infected via IV drug use, EPI-NEWS 7-8/2015. The increase of 22 notified persons in 2015 may, nevertheless, be attributed to 11 notified persons from South Jutland, whereof eight had been tested in 2014. It is encouraging that a more systematic testing of drug users seems to have been implemented at rehabilitation centres, and that the persons who test positive are notified.

Routine testing of IV drug users is needed to clarify any doubt concerning the incidence, and to offer control and treatment of hepatitis B in this group.