In addition to protecting against the conditions normally covered (diphtheria, tetanus, pertussis, polio and haemophilus influenzae type b infection), the vaccine also protects against hepatitis B. The vaccine is provided by the pharmaceutical company Sanofi Pasteur MSD.

The above-mentioned change does not cause any changes in the vaccination times. In line with the DTaP-IPV/Hib vaccine, Hexyon® is given at 3, 5 and 12 months of age.

In the following, we describe which service codes should be used in connection with vaccination under the temporary programme. Towards the end of this issue of EPI-NEWS, we provide answers to a number of frequently asked questions.

The temporary childhood vaccination programme is described in Table 1.

It can still be ordered from the SSI, and we expect to be providing the vaccine as from Week 6/7. We expect that the SSI will be able to provide primary vaccines to conclude vaccination of these children.

Only if no more SSI vaccines are available at the time of the vaccination, centrally as well as decentrally, should the child conclude vaccination with the DTaP-IPV/HibHbv vaccine, Hexyon®, as the third dose (and in rare cases also as the second dose).

If, at the end of the temporary programme, the child has received one or two DTaP-IPV/HibHbv vaccines, Hexyon®, the child will be offered to complete the hepatitis B vaccination series free of charge.

This will be done by giving the paediatric hepatitis B vaccine, Engerix-B pæd®, which may be given concurrently with other vaccines, e.g. the MMR vaccine. Vaccination of children during the temporary vaccine change is presented in Figure 1. The relevant service codes are provided in parenthesis. 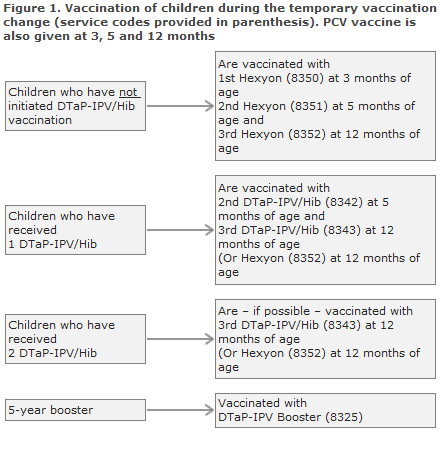 Monitoring of the coverage of the vaccination programme is based on the statutory notification of vaccinations to the Danish Vaccination Register (DVR) through www.fmk-online.dk or via integration of the DVR into the electronic health record system used.

Settlements are initially passed to the National Danish Health Insurance (Sygesikringen) and are subsequently imported to the DVR at several months’ delay.

It is very important to use the correct codes to avoid creating repeat registrations when you have already registered Hexyon® in the DVR. Correct registration is also of importance for the monitoring of any adverse reactions and to facilitate identification of the children who have been vaccinated against hepatitis B.

In accordance with an agreement entered into by Danish Regions and The General Practitioners' Association (PLO), the following codes shall be used for registering and settlement with the National Danish Health Insurance (Sygesikringen):

Children who have received hepatitis B vaccination at birth and at 1 month of age normally conclude their post-exposure prophylaxis with Engerix-B pæd® at 2 and 12 months of age. During the temporary childhood vaccination programme, they should conclude their programme with one or more doses of Hexyon®.

In such cases, settlement is a combination of the normal codes used for vaccination of children born by hepatitis B carrier mothers and the new temporary codes. See the codes above.

Children who have received two doses of Engerix-B pæd® (at birth and at 1 month of age) and who have not initiated DTaP-IPV/Hib vaccination, are vaccinated three times with Hexyon® at 3, 5 and 12 months of age and settled with the codes 8350, 8351 and 8352. Giving a total of five vaccines containing hepatitis B entails no risk.

Children who have received three Engerix-B pæd® (at birth and at 1 and 2 months of age) and two DTaP-IPV/Hib vaccinations with Hexyon® should receive Hexyon® (code 8352) at 12 months of age.

Children born by mothers with chronic hepatitis B shall be tested for antibody response 1-2 months after concluding their vaccination series with a view to testing if the vaccine has taken and to establish if there is indication for any further vaccination.

In situations in which the child's vaccination status does not comply with the described treatment courses, healthcare workers are invited to contact the Consultancy Team, Department of Infectious Disease Epidemiology, by phone (3268 3038) or in writing via epiinfo@ssi.dk 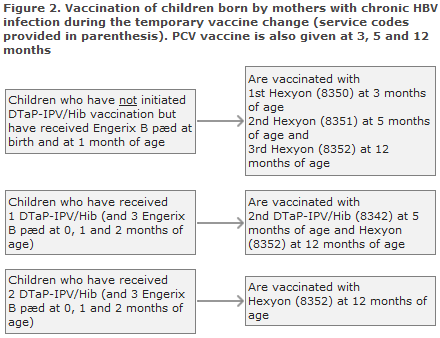 About the primary vaccine Hexyon®

The primary vaccine Hexyon® is produced by Sanofi Pasteur MSD, approved by the European Medicines Agency (EMA) and used in other European countries, e.g. Germany and Belgium. The vaccine is approved for administration in a 3-, 5- and 12-month primary programme and can be given concurrently with Prevenar13®. When Hexyon® and Prevenar13® are administered concurrently, they should be given in opposite extremities.

The first Hexyon supplied from the SSI comes with German-language packaging. These vaccines will be supplied with a Danish package leaflet. The packaging does not include injection needles. As from the second quarter of this year, these vaccines will be supplied in Danish packaging including injection needles. If the needle is not mounted on the injection syringe, it is screwed tightly onto the syringe by turning it 90 degrees.

The vaccine is given by intramuscular injection.

A slightly higher reactogenicity was observed after the first dose than after the subsequent doses. Clinically, the antibody response to Hexyon® may be affected when the vaccine is given concurrently with varicella vaccination. These two vaccines shall therefore not be administered concurrently. For information about more rarely observed adverse reactions (including hypersensitivity to neomycin and polymycin B, among others) and special warnings and precautions concerning the use of the vaccine, please refer to its summary of product characteristics, which is available for download at www.ema.europa.eu.

Patient information leaflets for Hexyon® will be provided by the SSI along with the vaccine, and are available for download from www.indlaegsseddel.dk, before we start providing the vaccine.

As the vaccine has not previously been used in the Danish childhood vaccination programme, the Danish Medicines Agency has decided that Hexyon® will be subject to an enhanced duty of notification meaning that doctors are under an obligation to notify of all presumed adverse reactions in persons they treat with the vaccine.

Note that the packaging will be in German language and no syringe will be included.

The vaccine may be ordered using Form 6 at http://www.ssi.dk/Bestil/Blanket6.aspx or by contacting the SSI Order Office (Ordremodtagelsen) ordre@ssi.dk or by phone 3268 3111.

This section holds questions and answers about the temporary change of the Danish childhood vaccination programme.

Children who have been vaccinated abroad and who now need to receive vaccination corresponding to the Danish vaccination programme continue their vaccinations in accordance with the guidelines described in EPI-NEWS 5a/15.

However, for Hexyon® the minimum interval separating the first and second dose is 2 months and not 1 month as for DTaP-IPV/Hib.

No clinical studies have been performed in children above the age of 2 years with Hexyon®. This vaccine has been approved by the European Medicines Agency since April 2013; and in Western Europe, it is primarily used in Germany and Belgium. Worldwide, more than 3 million doses of this vaccine have been administered.

The Hexyon® vaccine is based on a well-known vaccine from the same producer, Pentavac®, to which a hepatitis B vaccine component has been added. Pentavac® was administered in more than 160 million doses worldwide and is, among others, used in Sweden.

The hepatitis B vaccine component was also found to be effective in teenagers and adults. A similar 4-valent DTaP-IPV/Hib vaccine, Tetravac®, has been used as preschool and teenage booster in France, among others. It is assessed that Hexyon® adapted to the Danish programme may be used for children aged 2-10 years as long as the temporary vaccination programme is in force in Denmark, EPI-NEWS 5a/15.

However, for Hexyon® the minimum interval separating the first and second dose is 2 months and not 1 month as for DTaP-IPV/Hib.

The primary DTaP-IPV/Hib vaccine protects against diphtheria, tetanus, pertussis, polio and haemophilus influenzae type b infection. Hexyon®, which now temporarily forms part of the childhood vaccination programme, protects against the same conditions, but also protects against hepatitis B.

Why do children in Denmark not routinely receive hepatitis B vaccination?

Today, the Danish programme does not include hepatitis B vaccination as the risk of infection among Danish children is, in general, limited.

In many Central and Southern European countries, hepatitis B forms part of the national programmes, and this is also recommended globally by the WHO. Denmark instead chose a strategy focusing on vaccination of risk groups, e.g. children to mothers with hepatitis B who are identified through the systematic screening of pregnant women.

Shall children who are not fully vaccinated with Hexyon® themselves defray the costs of any supplementary doses of Engerix B needed to conclude their Hepatitis B vaccination series?

No. If — due to lack of vaccine — it becomes necessary to conclude the vaccination of some children whose vaccination course was initiated using the SSI vaccine with Hexyon®, these children will subsequently be offered Engerix-B pæd® vaccination free of charge to allow them to complete their hepatitis B vaccination series.

Is the protection against Hepatitis B as good as the one achieved from a single-component vaccine or the component that forms part of Hexyon®?

Yes. Studies have shown that the antibody level in children who had received Hexyon® was no different from that of a parallel group who instead received single-component hepatitis B vaccine and a pentavalent DTaP-IPV/Hib vaccine.

How do I settle the temporary vaccines with the National Danish Health Insurance (Sygesikringen)?

The vaccination card does not fit with the Hexyon®-vaccine?

The vaccination cards normally handed out to parents will not be printed for the temporary vaccine change. In the text field above DTaP-IPV/Hib, the person administering the vaccination writes that Hexyon® was given and also states the relevant batch number.

For how long are you protected after concluding primary vaccination?

How come some children get pertussis despite their pertussis vaccination?

The protection against pertussis increases markedly with each of the three vaccination doses the child receives. Therefore it is important to adhere to the planned vaccination times at 3, 5 and 12 months of age. The pertussis component is not 100% efficient, and some pertussis should be expected among fully vaccinated children below the age of 2 years. Pertussis is also seen in fully-vaccinated larger children as the protection is limited to a 5-10-year period.

The package leaflet states that the vaccine shall not be given if the child has had problems with the nervous system within 7 days after receiving vaccination with a pertussis vaccine. Does that constitute a change with respect to previous practice?

No, the DTaP-IPV/Hib vaccine already previously had a precautionary provision relating to children with progressive neurological conditions. These children should not receive vaccine containing pertussis. This also applies if serious reactions to vaccination were previously observed.

May a child who is running a fever be vaccinated?

In case of acute illness with a high fever, vaccination should be postponed. Mild infections such as an ordinary cold with or without fever up to 38 °C should not postpone vaccination. Children who are possibly developing illness or who are undergoing work-up should not receive vaccination before their condition is stable and has been diagnosed.

Is it possible to give half the vaccine dose to avoid adverse events in a very small infant, for instance?

No, the full dose must always be given to achieve a sufficient immune response and therefore protection. A reduced dose entails considerable risk of rendering the vaccination completely ineffective.