Hepatitis B, HIV and syphilis screening of pregnant women, 2013

Hepatitis B, HIV and syphilis screening of pregnant women, 2013 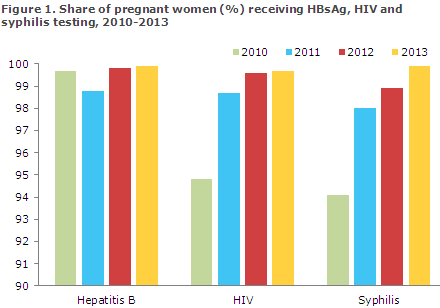 Among these, 99 women tested positive to HBsAg for the first time in 2013. Of these, 90 (91%) were reported to the statutory national hepatitis B notification system.

The remaining 59 women (37%) had previously tested HBsAG positive. Only 2 (1%) of the women were of Danish origin. HBeAg, a marker for disease activity associated with an increased risk of intrauterine mother-to-child infection, was detected in 16 (10%) of the women. 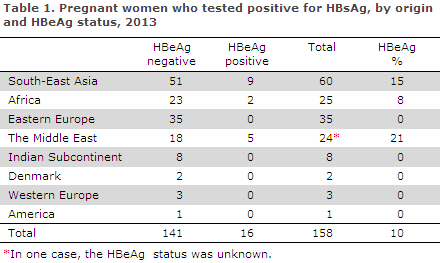 The general hepatitis B screening has been in place for more than eight years and is now starting to take effect. Thus, the number of children infected with hepatitis B during labour in Denmark has decreased considerably, Figure 2. 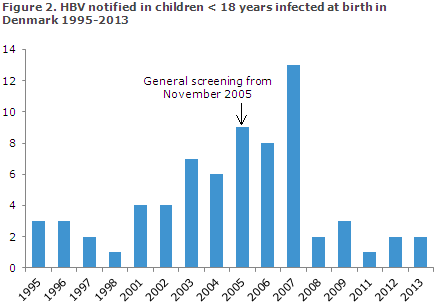 Among 60,843 HIV tests, 39 (0.06%) were positives. Five women had newly detected HIV and 34 were known HIV positives. All were notified via the statutory national HIV notification system. All five women with newly detected HIV were from abroad; four from Africa and one from Eastern Europe. Three had immigrated in 2012, one in 2010 and the last person had been residing in Denmark since 1996.

In one case, that of a pregnant woman who tested negative in the pregnancy screening, the woman became infected later in her pregnancy. This was only discovered shortly after giving birth as the woman presented with symptoms consistent with acute HIV and both mother and child then tested positive to HIV.

Among the 60,948 syphilis screening tests, a total of 115 were positives. Statens Serum Institut (SSI) knows of the results of 111 confirmatory serological tests (96% of the 115). Current syphilis was established in three of these cases, corresponding to 0.005% of the tested pregnant women. Among the three, one was Danish, one African and one was from Asia. None of these cases had been notified via the statutory national syphilis notification system.

In one case, that of a pregnant woman who tested negative in the pregnancy screening, the woman became infected with syphilis later in her pregnancy. This was only discovered shortly after she had given birth as her child presented with symptoms consistent with congenital syphilis and both mother and child tested positive.

The general screening of pregnant women is a success. The share of blood type tested pregnant women who were screened for HIV and syphilis was higher in 2013 than in any other year since screening was introduced in 2010, Figure 1. In Denmark, the number of hepatitis B cases notified as mother-to-child infection has decreased considerably, and no cases of mother-to-child infection with HIV or syphilis were observed in cases where the mother screened positive and then received treatment.

However, in 2013 one case of mother-to-child infection with syphilis and another with HIV were notified in cases in which the pregnant woman became infected after having been screened. Some countries with a high occurrence of syphilis or HIV have introduced several screenings during pregnancy.

This would not be an expedient solution in Denmark as the occurrence of these diseases is low. However, physicians and midwives who come into contact with pregnant women who are assessed to be at special risk are advised to offer such women an extra syphilis and HIV test during their pregnancy.

As in previous years, about 100 screenings tested positive for syphilis. The majority of these are false positives, which is determined through the confirmatory test. However, a number of pregnant women have antibodies due to previous syphilis and their confirmatory tests are therefore difficult to assess without knowledge of the previous test results.

The SSI previously received confirmatory samples from all of the pregnant women who had tested positive in the screening. By comparing the laboratory results with clinical information provided by those who ordered the tests, it was possible to classify nearly all tests. This is no longer possible as the regions now perform a considerable part of the confirmatory syphilis tests themselves.

None of the three syphilis-positive pregnant women had been notified to the Department of Infectious Disease Epidemiology by the physicians in question. This may be due to the fact that only the Syphilis Laboratory at the SSI sends a notification form to those ordering the tests reminding them to fill in and send the form to the Department of Infectious Disease Epidemiology if the suspicion of syphilis is confirmed.

For four pregnant women who were screening positives, it was not possible to retrieve the results of the confirmatory test or even to establish if such a test had been performed. For the screening to function optimally, we encourage GPs to follow up on all screening positive tests, and in case any doubt arises, to refer the pregnant woman for further work-up at a department of infectious medicine, Table 3. 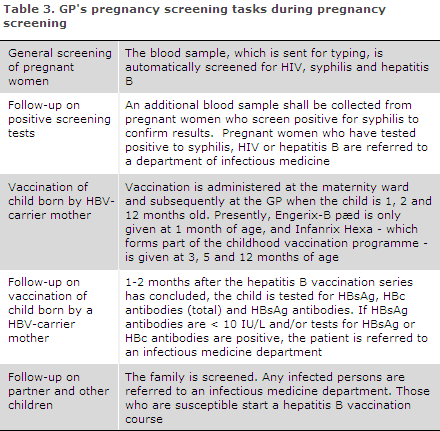 Furthermore, it is important that the treating physicians refer any pregnant women who have been diagnosed with one of the three infections in the screening to the relevant specialist departments, even if the woman in question has no symptoms of infection.

In pursuance of the Danish Health and Medicines Authority's guideline on general screening of pregnant women for infection with hepatitis B, HIV and syphilis, the pregnant woman's partner and remaining children, should be invited to provide a blood sample.

In the most recent guideline on HIV, hepatitis B and C virus published in 2013, the Danish Health and Medicines Authority recommends that all children born by carrier mothers who receive hepatitis B vaccination at birth and subsequently at the GP should be tested to confirm that the vaccination has taken and to test for current infection one month after the vaccination series has been concluded.

This recommendation is based on studies demonstrating that inter-uterine infection does occur in some children, in which case the vaccine is ineffective. It is the responsibility of the GP to perform this test. If a child has been infected despite the vaccinations or if a child is insufficiently covered, he or she should be referred to a specialist department.
(C. H. Møller, A.H. Christiansen, S. Cowan, the Department of Infectious Disease Epidemiology, S. Hoffmann, Microbiology and Infection Control)