Acute and chronic hepatitis B 2014
MRSA - knowledge and advice

Acute and chronic hepatitis B 2014

In 2014 the Department of Infectious Disease Epidemiology received 16 notifications of acute hepatitis B; 12 of the cases were men.

The median age was 45 years (range 24-76 years). A total of 13 persons (81%) were of Danish origin, whereas 3 persons were of foreign origin, including 1 second-generation immigrant. Among the 13 persons of Danish origin, 8 were infected in Denmark, 1 in Indonesia, 1 in Thailand and 1 in Germany, whereas the actual country of infection (in South-East Asia) was unknown for 2 persons.

A total of 5 persons (31%) were in the 60+ age-group, all of Danish origin. Among these, 4 were infected while travelling abroad as tourists (3 in South-East Asia, 1 in Germany) by heterosexual contact to a person with a known risk. The final person was infected in Denmark; the mode of infection was not stated.

In 2014, the Department of Infectious Disease Epidemiology received notification of a total of 253 cases of chronic hepatitis B, Table 1. 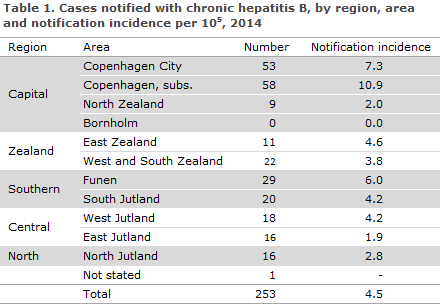 The majority, 240 (95%) were of foreign origin, including 10 second-generation immigrants, 6 adoptees and one child of an adoptee, whereas 13 (5%) were of Danish origin. The notified persons of foreign origin were distributed on a total of 47 countries, including 77 persons (32%) from South-East Asia. One notified case was a 2-year-old child adopted from Africa.

Among the notified cases there was a considerable preponderance of women of foreign origin, Figure 1. Particularly women from South-East Asia and Eastern Europe were over-represented relative to men, as they comprised 79% and 80%, respectively. 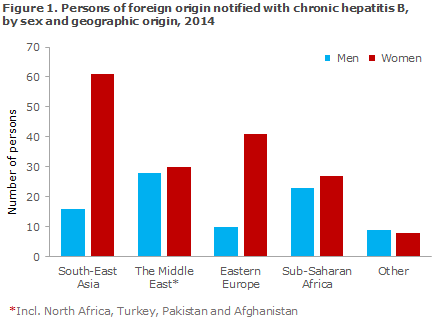 Among 229 persons who were born abroad, the immigration year was stated for 224 (98%). Pregnant women tended to be notified more rapidly after their arrival to Denmark than non-pregnant women and men, Figure 2. 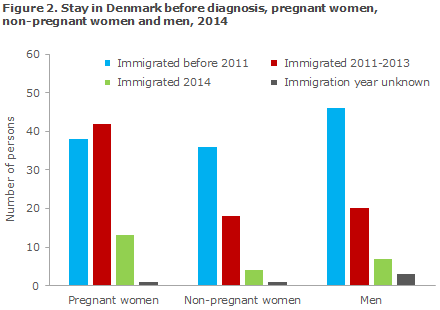 All mother-to-child infectees were of foreign origin, including the 6 who were adopted to Denmark. Ten persons born by foreign parents were infected at birth in Denmark, all before the introduction of the general screening of pregnant women. Information on vaccination status was only available for one of these persons; the person had not received hepatitis B vaccination.

Twelve persons were infected sexually, including 4 in Denmark. Five were infected homosexually; they all resided in the Capital Region of Denmark. Information on hepatitis B vaccination was unavailable for all five persons.

For 100 persons, no source of infection was provided. A total of 95 (95%) of these persons were of foreign origin; and among these, 92 were immigrants or descendants to immigrants from highly endemic countries. Among these, 83 were notified as having been infected before their arrival to Denmark. Five persons were of Danish origin, one of whom was notified as having been infected in Denmark. In the remaining cases, the country of infection was unknown.

The number of notified cases of acute hepatitis B remains very low. Even though some under-reporting is to be expected, infection spreading in Denmark is thus negligible. The majority of the persons who were notified with acute hepatitis B were of Danish origin. For all of these, sexual contact was provided as the route of infection. Hepatitis B vaccination is particularly important prior to travels to highly endemic countries for persons who plan to have sex with locals.

A limited number of the notified were adopted to Denmark from highly endemic countries. The majority of these cases were detected through the general screening of pregnant women and should have been diagnosed much sooner. It is still recommended to test persons adopted to Denmark, also before giving hepatitis B vaccination, as vaccination of an already infected person causes a false sense of safety and deprives the person of a diagnosis and treatment.

Thanks to the screening of pregnant women for hepatitis B, a considerable number of asymptomatic carriers are detected annually. Even though these persons are asymptomatic, they shall be referred to speciality departments (infectious medicine or hepatology) for further work-up, control and, if relevant, treatment. This is important not least because today it is possible to treat women who have a high viral load who would otherwise risk inter-uterine infection of their child.

It is striking that persons detected through the pregnancy screening have been living in Denmark for a shorter period of time than persons diagnosed for other reasons, Figure 2. Persons from highly endemic countries should be tested upon their arrival to Denmark or when they first approach Danish healthcare.

No children infected at birth have been notified since the introduction of the general screening of pregnant women in Denmark.

Children born by women who were diagnosed with hepatitis B as part of the pregnancy screening shall be vaccinated at birth and at 1, 2 and 12 months of age. The children shall be tested to establish if the vaccination has had the desired effect 1-2 months after concluding their hepatitis B vaccination. The testing is done at the child's GP.

A blood sample is taken to establish anti-HBsAg, HBsAg and possibly anti HBc.

Not just pregnant women but women in general comprised the majority of the persons notified with chronic hepatitis B. According to Statistics Denmark, women comprised 66% of the immigrants from South-East Asia who were in Denmark in the third quarter of 2014.

Women comprised 50% of the immigrants from Eastern Europe, Sub-Saharan Africa and the Middle East. Presumably, among immigrants, hepatitis B is equally frequent in women and men. As a much larger share of the immigrant notifications concern women, Figure 1, it is likely that an unknown number of undiagnosed men reside in Denmark, particularly men from Eastern Europe, but also from South-East Asia.

It is surprising that only two persons were notified as having been infected due to IV drug use. This group was previously considered to have the highest hepatitis B incidence in Denmark. Possibly, systematic vaccination of the group has contributed to a substantial decrease in the incidence, but it is also possible that infected drug users are not diagnosed. Systematic testing of drug users in rehabilitation centres is needed to shed light on the prevalence , and to offer control and treatment of hepatitis B in this group. 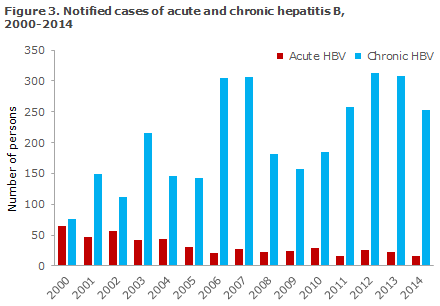 This year, the Department of Infectious Disease Epidemiology has started calculating the number of annual notifications of acute and chronic hepatitis B based on the date the notification was received. Previously, the date of disease onset was used if such a date was provided, the sampling date if provided, and otherwise the date for the reception of the notification was used. Consequently, the number of chronic hepatitis B notifications reported in this issue of EPI-NEWS may deviate slightly from previously provided figures, Figure 2.

The information, published at www.ssi.dk/mrsa (in Danish), is aimed at citizens in general, but will presumably also prove to be interesting for healthcare workers, who may also refer patients to the pages for more information.

The advisory service has prepared a FAQ page at www.ssi.dk/mrsafaq (in Danish). The FAQ allows you to learn if there is a risk of infection when visiting a farm or when completing work tasks at a farm, among others; and it offers information about the precautions farm owners and employees at pig farms should take to avoid spreading MRSA.

More information about the advisory service on livestock MRSA (in Danish).