The difference in median age reflects the fact that TB is mainly observed in middle-aged and elderly Danes, whereas the condition is mainly seen in young and younger adults of non-Danish origin, Figure 1. 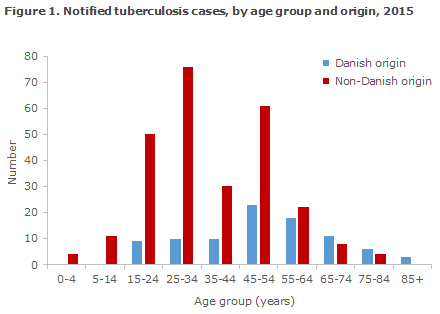 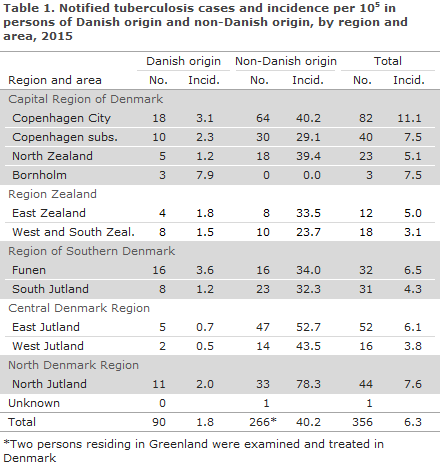 As previously, the highest incidence (11.1 cases per 100,000) was seen in the City of Copenhagen, corresponding to 23% of all detected tuberculosis cases.

Figure 2 presents the development in the TB incidence in persons of Danish origin, by region in the 2011-2015 period. 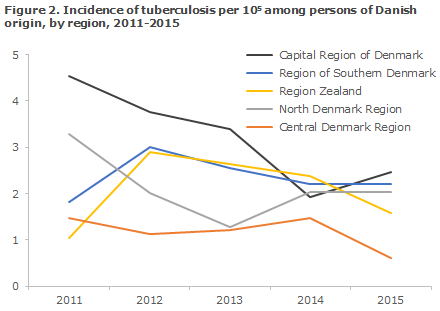 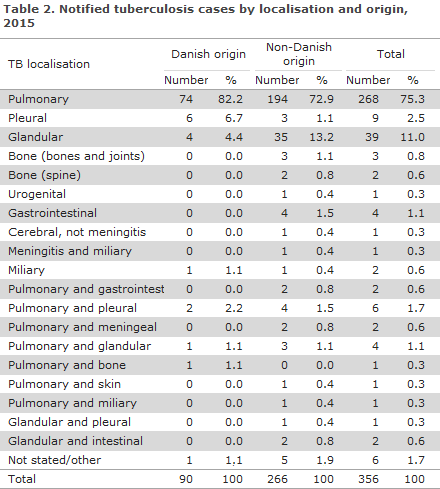 A total of 39 (11%) patients were notified with relapse, including 17 Greenlanders, five Danes, four Somalis, three Romanians, two Syrians and Afghans, respectively, and one person from each of the following countries: Bosnia and Herzegovina, Burundi, Ethiopia, Pakistan, Russia and Sweden. For a total of 15 (38%) of the patients, the previous TB episode had occurred within the past four years.

Alcoholism, homelessness and/or drug abuse was noted for 26 persons (7%) of whom nine were Danes and 17 immigrants.

As previously, it is estimated that this risk factor is underreported in the notifications.

2015 saw a total of 65 notified cases of TB in Greenlanders. This was an increase from 47 cases in 2014, and at an incidence of 410 cases per 100,000, Greenlanders living in Denmark remain the greatest single group among the TB cases of non-Danish origin (24% of the persons of non-Danish origin, 18% of all cases), Figure 3. The majority of cases were notified from the City of Copenhagen (22) South and East Jutland (11 each) or North Jutland (9). 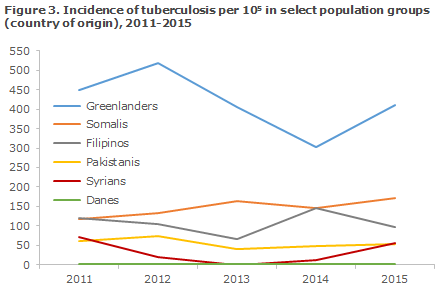 A total of 12 children had pulmonary TB, including one who also had TB meningitis, one child had cerebral TB (an intracerebral tuberculoma) and glandular TB, and for one child the localisation was unknown.

Nine of the children (60%) had probably become infected by a member of their household. A single Danish child was infected through contact to a person who was not part of the household and who had become infected with TB more than three years ago. One child had relapse (TB in 2005), and for four children the source of infection was unknown.

In addition to the 15 notified children, information was provided on positive culture from the lungs of two Danish children (siblings), both below five years of age, who have not yet been notified despite several reminders.

In three cases, infection had possibly occurred in relation to occupational activity. One person, a construction worker, was believed to have become infected by a work colleague.

The patient and the colleague turned out to belong to the same small chain of infection, which speaks in favour of a connection between the two cases. One had reportedly become infected through work with socially exposed people. On the basis of typing of isolates, occupational infection could neither be confirmed nor dismissed as the patient belonged to the infectious chain “cluster 2” (see below).

Finally, one person had reportedly become infected through a colleague of non-Danish origin who had recently initiated treatment. No personal information was available about the colleague, but the patient and only one more person in Jutland, who was of non-Danish origin and from the same area, belonged to the infection chain in question, which speaks for a connection.

A total of 30 cases were linked to an epidemiologic outbreak code belonging to a total of 16 outbreaks counting 2-5 persons each. Six persons linked to two different outbreak codes were associated with Sundholm in the Copenhagen area. A total of 24 persons belonged to various different family outbreaks.

Among the 79 notified cases who had not been culture-verified, nine (11%) cases had a positive PCR at the SSI, one of which was performed on paraffin-embedded (dead) tissue and therefore the sample in question had not been cultured. The remaining eight PCR-positive cases were culture-negative, but two were positive upon microscopy. Negative culture despite positive PCR and/or microscopy may be due to patients having been started on anti-tuberculosis treatment before the culture samples were taken. On the basis of the EU disease definition, EPI-NEWS 51/09, a total of 279 (78%) were confirmed cases, eight (2%) probable cases and 69 (19%) were possible cases.

Drug resistance results were available for all 277 culture-verified cases.

Additionally, five multiresistant (MDR) and one extremely resistant (XDR) case were detected, corresponding to 2.2% MDR/XDR TB. MDR is resistant to the two primary antibiotics, isoniazid and rifampicin, and possibly to other antibiotics as well. The term XDR resistance designates MDR resistance and additional resistance to a minimum of one of the important second-line drugs belonging to the group of fluoroquinolones and a minimum of one of the three injectable drugs amikacin, capreomycin or kanamycin. If resistance testing shows MDR and only fluoroquinolone resistance or only resistance to one or more of three of the mentioned injectable drugs, the term “pre-XDR” TB is often used. Two of the five detected MDR cases in 2015 were pre-XDR TB.

The XDR TB case was a 47-year-old Russian-born patient who had microscopy-positive (infectious) pulmonary TB. The patient’s isolate was resistant to no less than 13 of 16 tested drugs. One of the two pre-XDR cases was a 20-year-old Somali-born patient who had TB in the spine and in whom the isolate, in addition to MDR, was resistant to all of the tested fluoroquinolones and to ethambutol, pyrazinamide, streptomycin and ethionamide.

The last of the three MDR TB cases was a 40-year-old Danish-born patient who had microscopy-negative pulmonary TB and whose isolate, in addition to MDR, had no additional resistance findings.

Nevertheless, it seems that this trend has not continued into 2016, when a total of 302 TB cases have been notified to date, including 232 (77%) cases among persons of non-Danish origin. It should, nevertheless, be stressed that the figures are preliminary and will increase further, in part because more cases may be notified this year; and in part because TB cases notified in 2017, but with symptom onset in 2016, count as 2016 cases. 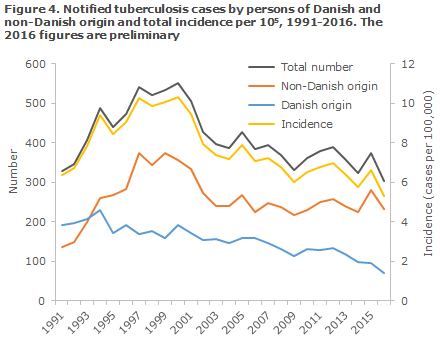 Even though the number of cases among ethnic Danes is decreasing in the Copenhagen area - possibly owing to intensified active infection tracing since 2012, EPI-NEWS 15/16 - the region has a total incidence of more than 10 per 100,000, which is the threshold value for low incidence. One of the main reasons for this is the still high and increasing occurrence among Greenlanders as most of the increase in cases in Greenlanders were observed in the City of Copenhagen.

It is encouraging that relatively few children were notified with TB (15 cases, 4%), but it is also cause for concern that about half of the children presumably became infected in Denmark. We have specific knowledge about lacking notification of culture-verified TB in two Danish children, which may raise suspicion that some under-reporting occurs of TB among children. This may occur because healthcare workers insist less on taking diagnostic samples from children and instead base the diagnosis on recent contact to a TB patient, the patient’s symptoms and maybe on a positive Mantoux/IGRA test.

Further reasons may be that children have a lower bacterial load than adults and therefore less frequently test positive by microscopy, PCR and/or culture when samples are submitted for testing, and that it may be easier to forget to notify the clinically detected cases.

Globally, the TB incidence is decreasing, but the total global number of TB cases (the prevalence) increases due to population growth. Furthermore, some parts of the world are facing considerable challenges due to resistant strains, including MDR and XDR TB. The resistant strains are primarily seen in Eastern Europe, South-East Asia and in Southern Africa. For instance, 18% of all tested new pulmonary TB cases in 2014 had MDR TB in the WHO’s European Region, which includes parts of Eastern Europe.

In contrast, Denmark has so far been spared serious problems relating to MDR and XDR TB. On average, as little as two MDR TB cases have been detected annually in the past many years, corresponding to approx. 0.5% of all TB cases.

The increase in MDR, pre-XDR and XDR TB cases is worrying. These are very serious forms of resistance that require considerably prolonged (1 to 2 years) and complicated treatment with many different antibiotics and entail a considerable risk of complications and adverse effects. Furthermore, the treatment of XDR TB, in particular, is very costly and requires prolonged - often many months of - hospital admission.

It is important that the resistant cases are diagnosed as early as possible in the course of the disease to avoid incorrect treatment and unnecessary complications for the affected people, and unnecessary spreading of resistant strains in the community. The many isoniazid monoresistant patients in 2015 (5%) stress the importance of culturing the diagnostic samples to ensure that isoniazid resistance (or other forms of resistance) is not missed and thereby in practice to give these patients monotherapy in the continuation phase of their treatment, i.e. the final four months of treatment when the standard treatment regime is based on isoniazid and rifampicin.

Otherwise, the result may be additional development of MDR TB. The importance of reminding of this is stressed by the report in EPI-NEWS 15/16. The report, which were based on the Danish microbiology database (the MiBa), demonstrated that not all of the samples tested locally by PCR were also cultured as recommended nationally and by the ECDC.

In addition to missing resistance, this may potentially cause under-diagnosing and under-reporting of TB as culture remains a more sensitive method than PCR, why more patients are identified at an earlier stage of their disease when their samples are cultured.

Currently, as part of an ongoing research and development project at the SSI, a more expedient diagnostic flow has been introduced, which means that genotypic determination of resistance is done as early as possible by use of various PCR/DNA-based methods, which are subsequently validated and supplemented by culture-based methods. This ensures that resistant TB strains are detected earlier in the disease course. It is our ambition to continue this project into 2017.

As previously, in 2015 the systematic typing of bacteria from culture-positive TB patients from 1992 onwards demonstrated that a single chain of infection, "C2/1112-15" (previously cluster 2), continues to comprise a considerable problem in Denmark, EPI-NEWS 04/14 and 03/15. Among the culture-positive patients in 2015, 31% of the Danes, 30% of the Greenlanders and 5% of immigrants from other countries belonged to this chain of infection which is by far the largest infectious chain in Scandinavia.

So far, a total of more than 1,000 cases have been recorded as from 1992. During the initial approx. 10 years, the patients in the infectious chain were predominantly of Danish origin, but 2015 once again brought an increasing share of cases relating to Greenlanders residing in Denmark and immigrants.

As mentioned, thanks to active screening, some patients belonging to the C2/1112-15 chain (and other chains of infection) are detected every year, but systematic screening is still not in place beyond Copenhagen, where approx. 60% of all patients reside.