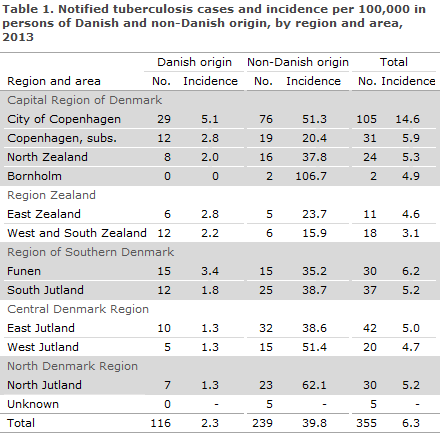 As previously, the highest incidence (14.6 cases per 100,000) was seen in the City of Copenhagen, corresponding to 30% of all detected tuberculosis cases. 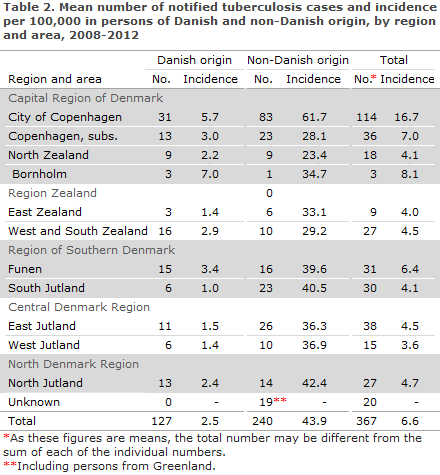 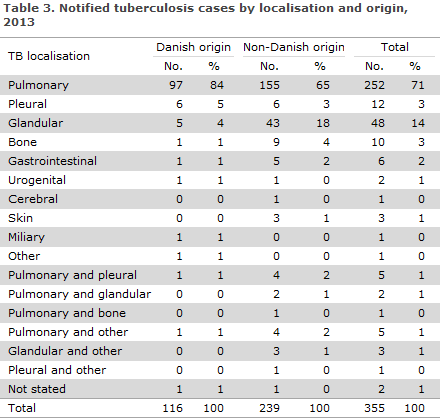 A total of 24 (7%) patients were notified with relapse, including 14 Greenlanders, three Danes, two Somalis and one from each of the following countries: Vietnam, India, Bosnia-Herzegovina, Tanzania and Afghanistan.

Alcohol abuse and/or homelessness were noted for 40 patients (11%) of whom 15 were Danes and 25 immigrants. It is thought that this risk factor is underestimated in notifications.

According to the notifications, information on concurrent HIV infection and therefore AIDS was provided in 10 (2.8%) cases, five Danish and five immigrant cases.

A total of 22 cases of TB in children below the age of 15 years were notified, including seven below the age of 5 years. Eight of the children were Danes; all had been infected in Denmark. Among the 14 non-Danish children, five were presumably infected in Denmark, eight in their parents' respective countries of origin, and for one child the country of origin was not stated.

Among the 79 notified cases that were not confirmed by culture, 18 (20%) cases had a positive PCR, two of whom also had a positive microscopy. In four of the 18 PCR-positive cases, the diagnosis was made on paraffin-embedded (dead) tissue, and therefore samples were not cultured. The remaining 14 PCR-positive cases were culture negative. On the basis of the EU disease definition, EPI-NEWS 51/09, a total of 278 (78%) were confirmed cases, 16 (5%) probable cases and 61 (17%) were possible cases.

Drug resistance results were available for 275 of 276 culture-verified cases.

Additionally, one multiresistant (MDR) and one extremely resistant (XDR) case were detected. MDR is resistance to the two primary antibiotics, isoniazid and rifampicin, and to any other antibiotics. The MDR-TB patient was microscopy-negative and had a strain that was resistant to isoniazid, rifampicin and ethambutol and to amikacin and capreomycin, but sensitive to ofloxacin and moxifloxacin.

The XDR-TB patient had a strain that in addition to being resistant to isoniazid, rifampicin and ethambutol was also resistant to amikacin, capreomycin, ofloxacin and moxifloxacin. This patient was microscopy-positive and therefore infectious. To the best of our knowledge, contact tracing identified no other infected persons. Both cases were detected in Russians with pulmonary tuberculosis.The patients had recently arrived to Denmark as refugees and had therefore presumably been infected in their country of origin.

Following a sustained decrease in the total number of annual cases of tuberculosis in the 2001-2009-period and an increase in the 2010-2012-period, EPI-NEWS 50/12 and 4/14, the incidence once again followed a slightly decreasing trend in 2013. Seemingly, the decreasing trend has continued throughout 2014 - with a proviso for lacking notifications - as less than 300 cases have currently been notified, Figure 2. 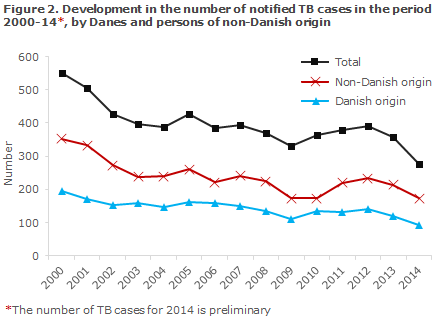 The decrease was divided between persons of Danish and non-Danish origin, including Greenlanders notified with TB.

Despite the recorded decrease in incidence, Greenlanders in Denmark are still a population group at special risk of infection or reactivation of TB infection and continues to demand a special focus.

The total decrease in the number of notified tuberculosis cases from 2008 to 2013 was as low as 8%. This corresponds to an annual reduction in TB incidence of just 2 percentage points, which is insufficient in relation to the WHO's strategy on global elimination of TB no later than by 2035.

Additionally, systematic typing of bacteria from TB patients with positive cultures from 1992 onwards demonstrates that a single chain of infection, "C2/1112-15" previously cluster 2), kept growing, EPI-NEWS 4/14. Many of the C2/1112-15 patients are Danish and Greenlandic males with an excess incidence of social problems and abuse issues.

A TB incidence among Greenlanders in Denmark in the order of 400/100,000 and a continued increase in the number of cases in the C2/1112-15 chain of infection demonstrate a continuous need for great awareness of TB control in Denmark. The majority of cases among Danes are detected in middle-aged persons, Figure 1, in contrast to our neighbouring countries where TB in the ethnic population is mainly seen in elderly persons, and where the cause is primarily reactivation rather than first-time infection.

For example, the share of infection chains with a minimum of two identical bacterial strains ("clustering rate") was 60% in Denmark in 2012, whereas the corresponding numbers for the remaining Nordic countries was 18-27%. In 2012, the number of major infection chains exceeded that observed in the remaining Nordic countries. Despite the current decrease in the number of notified cases, all of these conditions bear witness to continued transmission in Denmark.

The Danish Health and Medicines Authority has prepared a new guideline on tuberculosis that describes notification, infection tracing and hygiene issues, and which will expectedly be published shortly. Along with the appointment of regional tuberculosis coordinators and active contact tracing in risk environments, the guideline shall contribute to reducing transmission both in the short and longer run so that Denmark may meet the WHO's long-term objective of eliminating TB no later than in 2035.
(S. Voss, P.H. Andersen, Department of Infectious Disease Epidemiology, E. Svensson, National TB and Mycobacteria Reference Laboratory)

Once again it is possible to apply for the 2-year European training programme to become a field epidemiologist, EPIET (European Programme for Intervention Epidemiology Training). Participants will achieve skills comprising, among others, monitoring and control of infectious diseases, outbreak tracing and handling, applied research, communication etc.

The programme consists of 2 years of stationing in another European country. It is “on-the-job training” and participation in the study programme is remunerated. Participants are expected to have undergone relevant training, possess experience in the field of public health and to have an interestin field epidemiology.

This training programme is also completed as 2 years' of stationing in another European country. Programme participants will achieve proficiency in performing independent laboratory tasks in connection with the surveillance and control of infectious diseases, tracing and management of outbreaks, applied research and communication, etc. Participants are expected to have some work experience in the field of microbiology, to have a PhD degree and an interest in field epidemiology.

Both programmes are offered by the European Centre for Disease Prevention and Control (ECDC), and starts as a joint 3-week introductory course held mid-September 2015.

Applicants to EPIET and EUPHEM shall be citizens of the EU, Iceland, Liechtenstein or Norway with proficiency in English. The deadline for application is 2 February 2015.