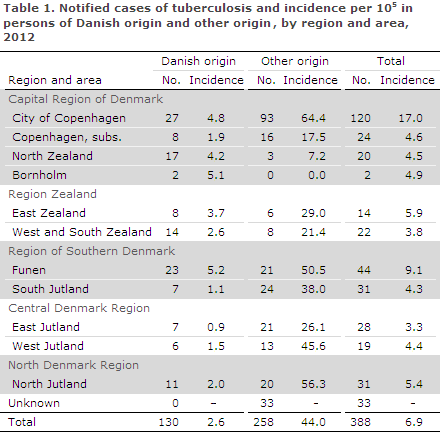 As previously, the highest incidences were observed in Copenhagen City and its suburbs where 37% of all cases were detected.
When the Danish regions were established in 2007, "areas" replaced the former "counties" in the context of sub-national reports in EPI-NEWS, and the previous practice of direct comparison of current with previous incidence rates at the sub-national level was therefore no longer possible, EPI-NEWS 49/07.

Now, the Danish regions have existed for a sufficiently long period of time to allow us to compare the current TB incidence in the individual areas with that observed in the previous five years. The mean number of notified cases and the mean incidences per 100,000 for the 2007-2011 period are presented by area and origin in Table 2. 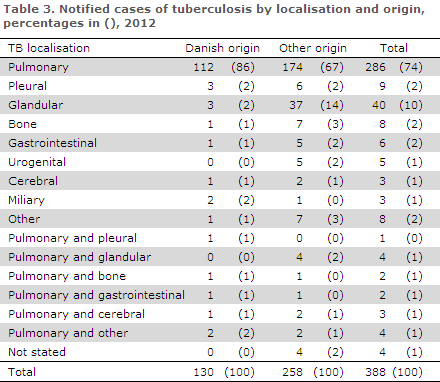 A total of 43 (11%) patients were notified with recurrence, including 15 Greenlanders, 13 Danes, five Somalis, two Pakistanis and one patient from each of the following countries: Ethiopia, India, Serbia, Nepal, Sri Lanka, Myanmar, Iraq and an unknown East African country.

Alcohol abuse and/or homelessness were noted for 43 patients (11%) of whom 21 were Danes and 22 immigrants. It is estimated that this risk factor is underestimated in notifications. According to the notifications, information on concurrent HIV infection and therefore AIDS was provided in ten (2.6%) cases, one Danish and nine immigrant cases.

As from 2007, the Department of Infectious Disease Epidemiology has systematically collected additional information on whether patients notified with TB had been tested for HIV and if they had tested positive, EPI-NEWS 50/12. For 2012, such information is currently available for 213 of 388 persons. Among these, 178 were HIV negatives, 19 had not been tested and 11 had tested positive.

Country of infection and ethnicity

Among ten ethnic Danes who had been infected abroad, the country of infection was unknown in nine cases and one had been infected in the Congo. A total of 171 (66%) immigrants were presumably infected in their countries of origin, including 31 Greenlanders, 15 Somalis, ten Filipinos, eight Pakistanis, eight Indians, seven Romanians, six Nepalese, five Sri Lankans, four Turks and four Myanmarians. An additional 83 immigrants were infected in a total of 40 countries of origin. For a total of 17 immigrants, the country of infection was unknown.

In 16 (22%) cases, homelessness and/or abuse were noted. A total of 32 were notified from the City of Copenhagen, 11 from North Jutland, ten from South Jutland, ten from Funen, five from East Jutland and a single case from each of the remaining Danish areas, barring Bornholm. In three cases, the area was unknown.

According to notifications, a total of thirteen persons were presumed to have been infected at their workplace. Eight had a positive culture, and in these cases bacterial typing (MIRU-VNTR) may contribute to clarifying the probability of occupational infection.

A Dane with infectious pulmonary TB was notified as having been infected while working in a social institution. MIRU typing demonstrated that 112 patients belonged to the same chain of infection (cluster), including a citizen associated with the same social institution as the employee. The citizen had had infectious pulmonary TB and occupational infection was possible .

One Dane with infectious pulmonary TB worked at a hospital as a social and healthcare assistant. The cluster (MIRU type 10280-78) counted another two patients, including one who was identified as a possible source of infection and who had suffered from pulmonary TB. Occupational infection was therefore likely.

One Dane with infectious pulmonary TB also worked at a hospital as a social and healthcare assistant. The patient's TB strain was unique. Occupational infection could therefore not be substantiated.

One Dane with infectious pulmonary TB worked as a medical secretary at a medical practice. Another five patients had the same MIRU type (1609-15), including one who was identified as a possible source of infection and who had suffered from pulmonary TB. Occupational infection was therefore likely.

A Dane with infectious pulmonary TB had worked as a nurse at a department of pulmonary medicine. MIRU typing identified the chain of infection as 91-215. The cluster counts 31 patients, rendering infection in Denmark likely. Occupational infection could not be substantiated.

One Greenlander with infectious pulmonary TB who had immigrated in 2012 worked on a cargo vessel. MIRU typing identified the chain of infection as 1121-51. The cluster counted a total of 114 patients, including many Greenlanders, which makes infection in Greenland likely. Occupational infection could not be substantiated.

One Dane with lymph node TB who worked at a school for adults possibly had occupational contact with the pupils of the school. MIRU typing identified that the chain of infection was cluster 2. At the end of 2012, the cluster counted a total of 870 patients. Occupational infection could not be substantiated.

A Danish citizen who was born abroad and who had infectious pulmonary TB worked on a cargo vessel. MIRU typing identified that the chain of infection was cluster 2. Due to the considerable number of patients in the cluster and lacking epidemiological information about a specific source of infection, occupational infection could not be substantiated.

Another five Danes were notified as occupationally infected. As culture was not performed or was negative and no information was available on a specific source of infection, occupational infection could be neither confirmed nor disconfirmed.

Among 20 (22%) of the 88 notified cases that were not confirmed by culture, 19 cases had a positive PCR and one person had a positive microscopy. In four of the 19 PCR positive cases, the diagnosis was made on paraffin-embedded (dead) tissue, and therefore samples were not cultured. The remaining 15 PCR-positive cases were culture negative. On the basis of the EU case definition, EPI-NEWS 51/09, a total of 302 (78%) were confirmed cases, 19 (5%) probable cases and 67 (17%) were possible cases.

Drug resistance results were available for all 300 culture-verified cases. A total of 261 of these cases were notified with TB for the first time, including 84 Danes and 177 immigrants. Among those notified for the first time, isoniazid mono-resistance was detected in nine (3%) patients, including five Danes and four immigrants. A single case of multidrug resistant (MDR) TB was detected. MDR is defined as resistance to the two main antibiotics, isoniazid and rifampicin, and any other antibiotics.

The MDR case was detected in an immigrant from Russia with "non-infectious" intestinal and glandular TB. The patient's bacteria isolate was also resistant to ethambutol, streptomycin, pyrazinamid, rifabutin and ethionamid. No other patients in Denmark had the same type of bacterium (according to MIRU VNTR analysis). It was therefore assumed that infection occurred in the patient's country of origin.

Information on previous TB was provided in 39 patients with positive culture. This group comprised nine Danes and 30 immigrants. No resistance was detected in any of these patients.

After observing a decrease in the total number of annually notified TB cases over a number of years, the TB incidence has followed an increasing trend as from 2009, EPI-NEWS 50/12.

The overall incidence in 2012 (6.9 per 100,000) was therefore higher than the mean observed in the previous five years (6.5 per 100,000), Table 1 and Table 2. The increase was primarily caused by an increase in the incidence of TB among immigrants, and particularly among Greenlanders, while the incidence among persons of Danish origin remained unchanged (2.6 per 100,000).
Among Greenlanders notified with TB, one in five had previously been notified with TB. This indicates that this population group is at special risk of becoming infected or reactivating the infection.

Despite the uncertainty associated with the assessment of presumed country of infection, it causes concern that an increasing proportion of TB patients are believed to have been infected in Denmark; 49% in 2012 as opposed to 41% in both 2010 and 2011.

Additionally, systematic typing of bacteria from TB patients with positive cultures from 1992 onwards has demonstrated that a single chain of infection, "C2/1112-15" (previously cluster 2) kept growing in 2012. C2/1112-15 is now, by far, the most comprehensive Danish as well as Scandinavian chain of infection. In 1992, there were a total of five C2/1112-15 cases. Presently, a total of 60-70 annual cases are detected in this chain, and from 1992 and onwards more than 860 cases have been recorded.

During the initial ten years, the overwhelming majority of the cases detected in the C2/1112-15 chain of infection were of Danish origin, but recent years have seen an increase in cases among Greenlanders residing in Denmark and a limited number of other immigrants, Figure 1. 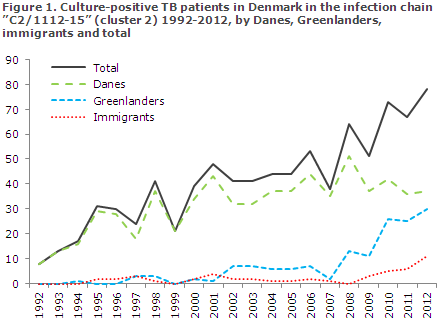 Furthermore, the chain of infection has spread to Greenland. Many of the C2/1112-15 patients are Danish and Greenlandic men with an excess incidence of abuse issues and social problems. It is assumed that they tend to turn to the healthcare system late. Because of late diagnostics, many of these TB patients may infect others before treatment can be initiated. This lacking interruption of the chain of infection is a particularly important factor maintaining the Danish TB incidence.

A TB incidence among Greenlanders in Denmark in the order of 500/100,000 and a continued increase in the number of cases in the C2/1112-15 chain of infection demonstrate a need for increased awareness of TB control in Denmark, including a special effort in TB risk environments. For instance, 2012 and 2013 saw an initiative on screening with microscopy and culture of expectorate from persons in TB risk environments in the Copenhagen and Aarhus areas, EPI-NEWS 12/13. Infection tracing and contact tracing should always be performed in accordance with the guidelines outlined in the national TB programme, which is available at www.ssi.dk.

Additionally, the Danish Health and Medicines Authority is currently revising its 1996 guideline on precautions to counter tuberculosis.

As previously, Denmark was largely spared the serious forms of resistant tuberculosis in 2012 when a single patient had multi-resistant (MDR) TB. However, in 2013 the first ever case of extensively drug-resistant tuberculosis (XDR-TB) was seen, i.e. resistance to rifampicin, isoniazid and fluorquinolone along with at least one of the following drugs: amikacin, kanamycin and capreomycin. The patient was an asylum seeker from one of the former republics of the Soviet Union. Many acid-fast bacilli were observed in the expectorate specimens, and the patient was therefore infectious.

MDR-TB occurs commonly in many locations in Eastern Europe. The risk of MDR- and XDR-TB is particularly increased among patients who have been treated for TB. Specimens from patients with an increased risk of resistant TB can be tested rapidly using PCR-based drug resistance testing for isoniazid and rifampicin.
(E. Svensson, National TB and Mycobacteria Reference Laboratory, C.H. Suppli, P.H. Andersen, Department of Infectious Disease Epidemiology)

Once again it is possible to apply for the two-year European training programme to become a field epidemiologist, EPIET (European Programme for Intervention Epidemiology Training). Participants will achieve skills comprising, among others, monitoring and control of infectious diseases, outbreak tracing and handling, applied research, communication, etc. The programme consists of two years of stationing in another European country. Participants are expected to have undergone relevant training, possess experience in the field of public health and to have an interest in field epidemiology.

It is also possible to apply for a similar two-year European training programme for microbiologists, EUPHEM (European Public Health Microbiology Training). This training programme is also completed as two years of stationing in another European country. Programme participants will achieve proficiency in performing independent laboratory tasks in connection with the surveillance and control of infectious diseases, tracing and management of outbreaks, applied research and communication, etc. Participants are expected to have some work experience in the field of microbiology, to have a PhD degree and to be interested in field epidemiology.

Both programmes are offered by the European Centre for Disease Prevention and Control (ECDC), and they start as a joint three-week introductory course held mid-September 2014. It is “on-the-job training” and participation in the study programme is remunerated.

Applicants to EPIET (12 seats) and EUPHEM (four seats) shall be citizens of the EU, Iceland, Liechtenstein or Norway with proficiency in English. The deadline for application is 2 February 2014.

Regrettably, last week's issue of EPI-NEWS (3/14) contained an error in Figure 1. In the top right hand box, code 8552 was given for 3. Infanrix hexa®. The correct code is 8352. The Editorial Team apologizes for any inconvenience caused.
(Department of Infectious Disease Epidemiology)