Tuberculosis 2014
Hexavalent vaccine for the childhood vaccination programme will be provided with the name of Hexaxim®. The vaccine provided is identical to Hexyon® 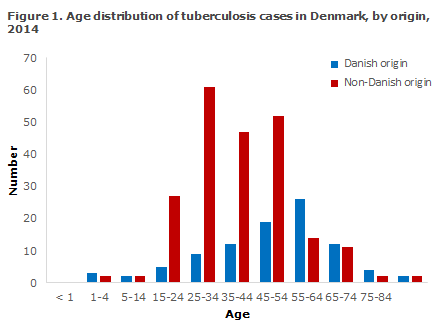 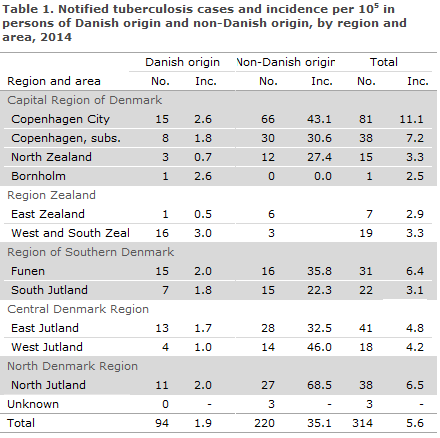 As previously, the highest incidence (11.1 cases per 100,000) was seen in the City of Copenhagen, corresponding to 26% of all detected tuberculosis cases. 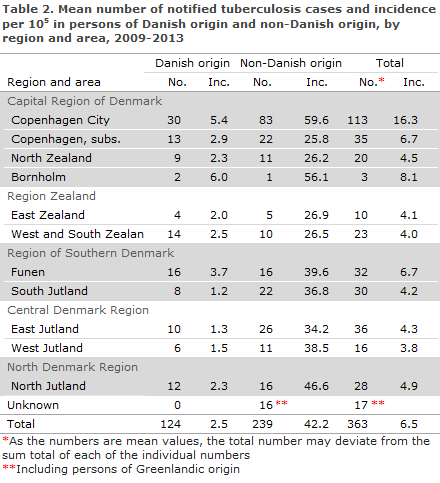 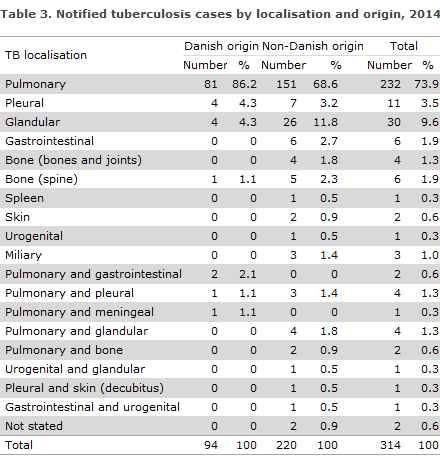 Alcohol abuse and/or homelessness were noted for 25 patients (8%) of whom nine were Danes and 16 immigrants. It is estimated that this risk factor is underestimated in notifications.

According to the notifications, information on concurrent HIV infection and therefore AIDS was provided in five (1.0%) cases, one Danish and four immigrant cases.

Among the 169 (54%) persons who were infected outside of Denmark, six were of Danish origin, including three who were presumably infected in Thailand, another two in Greenland and one in Russia.

For the remaining 15 (5%), the country of infection was unknown or not stated.

A total of eight (89%) children were probably infected by a member of their household who had had TB within the past 3 years; four Danish children, three descendants born in Denmark and one child of non-Danish origin born abroad. A single Danish child was infected through contact to a person who was not part of the household who had been notified with TB less than 3 years ago.

In 2014, the TB diagnosis was confirmed by culture with subsequent species determination in 270 of the 314 (86%) notified cases, including 80 of the 94 (85%) cases in Danes and 190 of the 220 (86%) cases in immigrants. One case of M. africanum case was detected in a 24-year-old woman from Nepal and one M. bovis case was detected in a 39-year-old man from Nigeria with TB meningitis who had ingested unpasteurised dairy products. The remaining cases (268) were caused by classic M. tuberculosis.

Among the 44 notified cases who had not been culture-verified, six (14%) cases had a positive PCR at the SSI, four of which were performed on paraffin-embedded (dead) tissue for which reason the samples in question could not be cultured. The remaining two PCR-positive cases were culture negative. On the basis of the EU disease definition, EPI-NEWS 51/09, a total of 270 (86%) were confirmed cases, six (2%) were probable cases and 37 (12%) were possible cases.

Drug resistance results were available for all 270 culture-verified cases.

Additionally, two cases of multiresistant TB (MDR-TB) were detected. MDR-TB is resistance to the two primary antibiotics; isoniazid and rifampicin and any other antibiotics. One of the MDR-TB cases was a 27-year-old Indian-born man who had microscopy-positive (infectious) pulmonary TB. The other MDR-TB case was an 18-year-old Somali-born man who had non-infectious pleural TB. Both patients’ isolates were not resistant to other antibiotics.

In 20 patients with positive culture, information on previous TB was provided; this group comprised six Danes and 14 immigrants. All had fully susceptible TB.

Following a sustained decrease in the total number of annual cases of tuberculosis in the 2001-2009 period and an increase in the 2010-2012 period, EPI-NEWS 50/12 and 4/14, the incidence once again followed a slightly decreasing trend in 2013, EPI-NEWS 3/15. This decrease continued in 2014, when the number of notified cases was lower than in any other year in the past 15-year period, Figure 2. The decrease was observed among persons of Danish and among persons of non-Danish origin. 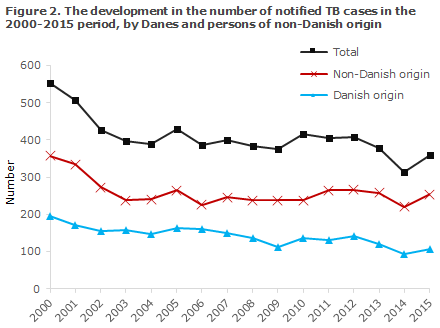 The decrease was divided between persons of Danish and non-Danish origin, including Greenlanders notified with TB.

An analysis based on the Danish microbiology database (the MiBa) about locally performed PCR in 2014 demonstrated that up to 40% of the samples were not forwarded for culture at the National TB and Mycobacteria Reference Laboratory at the SSI, as recommended nationally and by the ECDC.

This may potentially cause under-diagnosing and under-reporting of TB; under-diagnosing because culture is a more sensitive method than PCR, why more patients are identified at an earlier stage of their disease. It is not possible to establish how many TB patients may have been overlooked due to lacking culture. In 2014, a total of six cases were detected in which a local, positive PCR existed which had, nevertheless, not been notified. Henceforth, the MiBa will be used to underpin the current monitoring through identification of persons who test positive to TB and who have not been notified.

In 2014, a growing share of TB cases was verified by culture (86% compared with 82% in 2013 and 77% in 2012). The increase was primarily observed in cases among ethnic Danes and may reflect some under-reporting of purely clinical TB cases. This will be investigated further through validation of the notified cases against the cases registered in the National Patient Registry.

The recorded decrease in 2014 has not continued in 2015. At present, a total of 360 cases have been notified for 2015. This number is not final and may increase if cases with disease onset in 2015 are reported late, and may decrease if cases are removed from the statistics because the diagnosis later turned out to be incorrect. This occurs every year among the approx. 20% of the cases who do not have tuberculosis bacteria detected by culture. The increase seen in 2015 was primarily observed in the immigrant group and particularly among refugees from areas with a high incidence of tuberculosis, primarily Somalia, Eritrea and Ethiopia, whereas only a limited number of TB cases were detected among asylum seekers from Syria.

Despite the recorded decrease in incidence, Greenlanders in Denmark remain a population group at special risk of infection or reactivation of TB infection and continues to demand a special focus. The same applies to the socially exposed persons in the Copenhagen area where screening in risk environments from September 2012 and until now have persistently shown that approx. 2-3% of the persons screened have TB, including many with infectious pulmonary TB. At present, no firm decrease in TB incidence has been seen in this population group.

In the autumn of 2015, the National Health Authority has published a new guideline on tuberculosis (in Danish) which describes issues relating to notification, infection tracing and hygiene. Along with the appointment of regional tuberculosis coordinators and active infection tracing in risk environments, the guideline shall contribute to reducing the spreading of infection both in the short and longer run, so that Denmark may meet the WHO's long-term objective on elimination of TB no later than in 2035.

In January 2016, the Danish Society for Infectious Disease published a new guideline on tuberculosis diagnosis and treatment (in Danish). This guideline was prepared to provide practical assistance for physicians who are involved with the treatment of tuberculosis patients.
(P.H. Andersen, S.S. Voss, Department of Infectious Disease Epidemiology, T. Lillebæk, National TB and Mycobacteria Reference Laboratory)

Hexavalent vaccine for the childhood vaccination programme will be provided with the name of Hexaxim®. The vaccine provided is identical to Hexyon®.

This hexavalent vaccine from Sanofi Pasteur MSD is produced in the EU/EEA. The vaccine is marketed as Hexyon® in Western Europe, as Hexaxim® in markets beyond the EU and as Hexacima® in Eastern Europe.

To ensure stable provision, the SSI will - for a period of time - provide Hexaxim® rather than Hexyon®.

The vaccine is ordered using Form 6 or item number 97935 or by contacting the SSI Order Office.

As Hexaxim® and Hexyon® (and Hexacima®) are different names for exactly the same product, they may be combined freely in the vaccination programme, in line with the guidelines described in EPI-NEWS 5/16.

As from May 2016, the vaccine is expected once again to be provided in Danish packaging under the name of Hexyon®. As from this time, the vaccine will be provided with a syringe.
(P. Valentiner-Branth, Department of Infectious Disease Epidemiology, G. Germod, Planning Division)