In 2015, Statens Serum Institut (SSI) recorded 777 cases of newly acquired syphilis in 742 persons. In addition to the 777 cases, a total of 234 cases were assessed as not newly acquired and they are therefore not included in this report.

A total of 172 (22%) of the cases were both notified to the NSID and a specimen was submitted to the Department of Microbiological Diagnostics and Virology, SSI (DMDV), whereas 207 cases (27%) were notified to the DIDE and serologically confirmed at another laboratory not forming part of the SSI.

Furthermore, the NSID received 12 notifications (2%) for which there was no information about laboratory diagnostics, but in which it was not possible to dismiss current syphilis. A total of 386 (50%) were not notified to the NSID, 14 hereof were confirmed through full serological testing in the DMDV; and the remaining 372 cases were diagnosed at laboratories not forming part of the SSI. As in previous years, the majority of the patients resided in the Copenhagen area, Table 1. 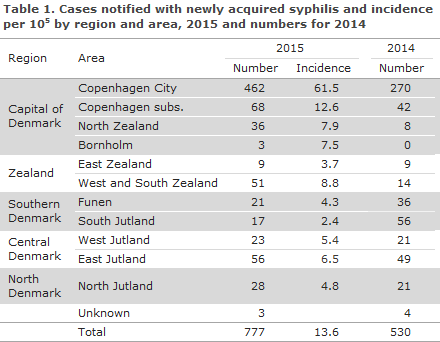 No cases of congenital syphilis were notified in 2015, but syphilis antibodies were detected in two neonates whose mothers had tested positive to syphilis in the pregnancy screening. In both cases, it is probable that only maternal antibodies were found. Nevertheless, it was decided to treat the two children as their mothers had initiated treatment so late in the course of their pregnancy that a full treatment effect could not be guaranteed.

Among the 72 syphilis cases that were detected in women, 12 were found owing to the pregnancy screening, EPI-NEWS 35/16. In two of these cases, no notification had been made to the NSID. Seven of the pregnant women were of Danish origin, the remaining were from countries in Eastern Europe, Asia and Africa.

The 391 cases that were notified to the DIDE occurred in a total of 383 persons, as eight men were notified with two syphilis episodes in the course of 2015. 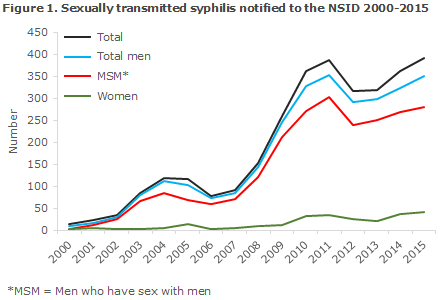 A total of 319 (82%) of the notified persons were of Danish origin, whereas 66 (17%) were immigrants, 4 were second-generation immigrants and 2 were tourists. The 72 persons of non-Danish origin were from a total of 42 countries from all parts of the globe.

Among the eight MSM with newly diagnosed HIV, one had previously been notified with syphilis.

The share of HIV positives among MSM with syphilis has varied over time, Figure 2. The largest share was recorded in 2008 (58%), whereas the share has subsequently followed a decreasing trend, reaching 40% in 2015. 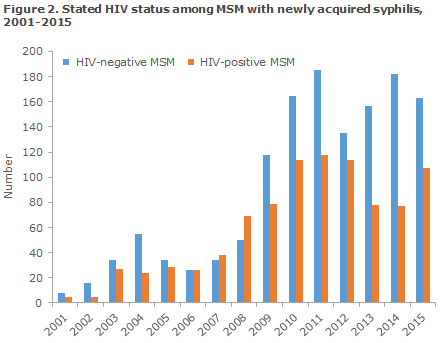 Among the recorded cases that were assessed as newly acquired syphilis, only 50% were notified to the NSID. In 2013, 91% were notified, EPI-NEWS 34/13; and in 2014, 68% were notified, EPI-NEWS 36/15. Thus, a considerable decrease in the share of notified cases has been observed in a short three-year time span. In 2013, virtually all confirmatory syphilis tests were performed at the SSI; in 2014, a total of 50% of the recorded cases were confirmed in a laboratory not forming part of the SSI; and in 2015 this share was 74%. The increase in the share of cases that are confirmed in laboratories not forming part of the SSI coincides with the decrease in the share of registered cases that are also notified to the NSID. Several circumstances may explain this.

The most obvious explanation is that the DMDV sends a notification form to the person ordering the test whenever the laboratory findings are consistent with current syphilis. This alone brings a high notification frequency. Thus, in 2015 a total of 172 of 186 cases (92%) who were diagnosed in the DMDV were also notified to the NSID. Even though the two Copenhagen-based laboratories that do not form part of the SSI expressly encourage the persons ordering tests with them to notify any confirmed cases, it is possible that enclosing a notification form constitutes an extra incentive for notification.

The Department of Infectious Disease Epidemiology cannot send out reminders concerning patients whose positive test results were established by laboratories not forming part of the SSI.

Following a reduction in the number of syphilis cases in 2012, the condition is once again on the rise. The increase has been observed for both sexes and applies to both homosexually and heterosexually infected persons, but the occurrence of syphilis remains higher among MSM.

No cases of congenital syphilis were notified in 2015, but the general screening of pregnant women identified 12 women with newly acquired syphilis, including 7 women of Danish origin. It is therefore still important that the screening of pregnant women continues and that the pregnant women who screen positive to syphilis undergo full serological testing to ensure that the diagnosis may be confirmed or dismissed within the time period in which treatment may prevent infection of the foetus, EPI-NEWS 35/15, i.e. so early that sufficient treatment may be concluded no later than four weeks before the pregnant woman gives birth. An increase in the number of pregnant women with current syphilis is, of course, worrying and warrants close follow-up in the future.

This group is therefore an obvious candidate group for enhanced measures against HIV infection, EPI-NEWS 20-21/2015. It is important to establish that the use of condoms remains an important measure of prevention against syphilis and other sexually transmitted infections. Nevertheless, the use of condoms is not an expedient measure of prevention for everyone. In this context, it will probably soon be possible to give so-called pre-exposure prophylaxis (PrEP) against HIV. This is recommended by the WHO as well as the UNAIDS for persons at special risk of HIV as a supplement to the use of condoms.

In July 2016, the European Medicines Agency approved the medicinal product Truvada (which was previously only approved for treatment of HIV) for PrEP in the EU. As the patents of the two ingredients used in Truvada will not expire until 2018 and 2020, respectively, there is a need for funding of this expensive medicinal product, alternatively for approval of a similar, but more inexpensive pharmaceutical.

The share of the notified syphilis patients (particularly MSM) who has been tested for HIV is very high. This is encouraging, and it remains important that MSM who are tested for syphilis also be tested for HIV, EPI-NEWS 46/09, chlamydia, lymphogranuloma venereum (LGV), hepatitis B & C, and gonorrhoea.

Less than half of the cases that were diagnosed at laboratories not forming part of the SSI were notified to the NSID. This seems to be due to the fact that the SSI can only contact the ordering doctors directly by sending them forms and reminders if the doctors have ordered their tests with the SSI.

Newly acquired syphilis, i.e. primary and secondary syphilis, is notified to the Department of Infectious Disease Epidemiology, Statens Serum Institut (SSI) on Form 1510, which is available for download at www.ssi.dk.

As from July 2015, the full civil registration number (CPR of the patient needs to be stated on the form, whereby monitoring is improved. The new form also includes the questions that were previously stated on a separate white form from the SSI's syphilis laboratory and which, among others, facilitate staging. The latter form is therefore no longer used, which facilitates the work of the notifying physicians.

Measles cases in the Copenhagen area

During admission to a regional hospital in the Copenhagen area, morbillivirus (measles) was detected in a urine sample drawn from a school-aged girl who had been on a tourist journey to Thailand. The patient who had received the first, but not the second MMR vaccine presented with symptoms of a bad cold the day after she returned to Denmark, but did not run a fever or experience photophobia until 8 days later.

Contacts have been exposed at several occasions; at school, at a recreational club, at the hospital and in her GP's waiting room. Contact tracing was initiated at the time of the diagnosis as a collaborative effort counting the Danish Patient Safety Authority, Supervision and Guidance East (formerly The Medical Officers of Health East), the hospital and general practice.

Two unvaccinated exposed adults were identified and measles post-exposure prophylaxis was initiated on 31 August in the form of vaccination (< 3 days after exposure) and human immunoglobulin (>3 and <6 days after the exposure).

Genotyping has presently been performed on a urine sample from 29 August and the type is D8 and a 100% match to a type currently circulating in Asia, including Thailand.

Physicians in the Copenhagen area are now encouraged to pay extra attention to the diagnosis in children and younger adults with symptoms that are consistent with measles. It is important that any person who is suspected of having measles avoids being in waiting rooms with other patients as measles is extremely infectious.

For a detailed description of measles, please see the SSI's measles theme page.

On suspicion of measles, the following samples should be taken:

We request that all measles-positive samples be sent to the National WHO Reference Laboratory for Morbilli and Rubella, Section for Virology Surveillance and Research, Statens Serum Institut for characterisation which is free of charge.

The primary form of prevention is MMR vaccination. MMR vaccination is normally offered to all children at 15 months and four years of age (previously 12 years of age). As post-exposure prophylaxis (PEP), MMR vaccination may be given to non-immune contacts within three days and normal human immunoglobulin within six days after certain exposure to infection.

Certain exposure is defined as contact with a laboratory-confirmed or epidemiologically linked MMR case. Delimitation of contacts who need PEP is done by the on-duty physician at the Danish Patient Safety Authority, Division for Supervision and Guidance (formerly The Medical Officers of Health). Expenses are covered by the regional authorities.

The current case underlines that physicians should be particularly attentive to the diagnosis in children and younger adults who present with symptoms that are consistent with measles, i.e. fever and a rash, in travellers who are returning from areas where measles still occur frequently.

The case also underlines the importance that persons who are under suspicion of having measles avoid staying in waiting rooms with other patients, whenever possible. Instead, these patients should be seen late in the day. If possible, house calls should be made. Furthermore, it is important that the doctors referring suspected measles cases to hospital inform the hospital of the suspicion so that the patient may be isolated immediately upon arrival.

Please note that the best possible protection is achieved after two MMR vaccinations. Most of the people who do not achieve immunisation after their first vaccination will be immunised after their second vaccination. If a person has not been vaccinated in accordance with the age-criteria of the childhood vaccination programme, the person should be offered immunisation. The MMR vaccine is free of charge for all persons below 18 years of age.

Measles cases complying with the disease definition, i.e. cases that are laboratory-confirmed or epidemiologically linked to such a case, are notifiable to the Department of Infectious Disease Epidemiology at SSI and to the Danish Patient Safety Authority, Division for Supervision and Guidance (formerly The Medical Officers of Health).

To underpin the preventive efforts, notification shall be done as soon as possible and preferably at the time of diagnosis as described in the above case. In the amended executive order on notification of infectious diseases, measles will become notifiable by phone. Until the executive order comes into force, you may e.g. notify by sending a fax (using Form 1515) to the Danish Patient Safety Authority, Division for Supervision and Guidance while also sending the notification by surface mail.