Syphilis 2014
Outbreak of polio-like disease in the Ukraine

In 2014, Statens Serum Institut (SSI) recorded 530 cases of newly acquired syphilis in 523 persons. In addition to the 530 cases, a total of 285 cases were registered but were assessed as non-current and they are therefore not included in this report.

Compared with 2013, an increase of 178 cases was seen, corresponding to 51% more cases in 2014. The increase was seen in nearly all parts of Denmark.

No cases of congenital syphilis were notified in 2014, but syphilis antibodies were detected in 2 neonates whose mothers had tested positive to syphilis in the pregnancy screening. In both cases, the antibodies detected in the newborn were probably only maternal antibodies. Nevertheless, the two children received treatment as their mothers had initiated treatment so late in the course of their pregnancy that a full treatment effect could not be guaranteed. 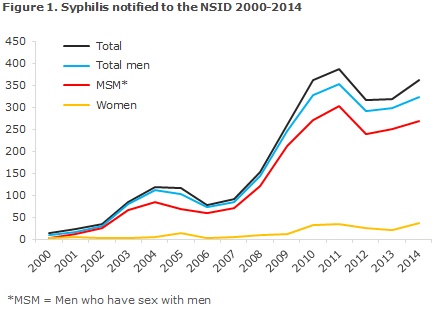 Among HIV-tested men, 77 (25%) were HIV positives. A total of 74 HIV positives were detected among 255 MSM (29%), 2 HIV positives were found among 36 heterosexually infected men (6%), and the mode of infection was unknown for the last HIV-positive man. Among the 77 HIV-positive men, 10 (13%) had been diagnosed with HIV and syphilis simultaneously (all MSM), whereas 56 (73%) were known HIV positives prior to their current syphilis diagnosis (53 MSM, 2 heterosexuals and in 1 case the mode of infection was not stated). For the remaining 11 (all MSM), there was no information on the time of HIV diagnosis. One non-Danish woman was a known HIV positive. 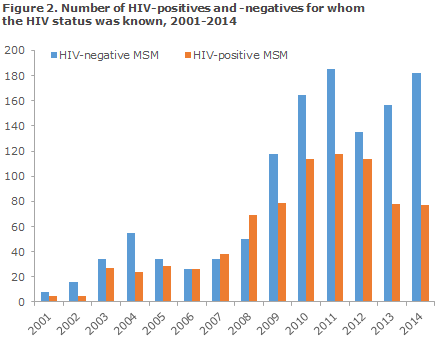 No cases of congenital syphilis were notified in 2014; but in the general pregnancy screening, a total of 18 syphilis positives were detected, EPI-NEWS 35/15, which is the highest number since the syphilis test was introduced into the general screening of pregnant women in 2010. The increasing number of pregnant women testing positive to syphilis in the pregnancy screening and the fact that 20 women (including 17 Danes) were registered as infected with syphilis in Denmark in 2014 indicates that syphilis has now been introduced into heterosexual circles in Denmark.

In 2014, 30% of the MSM with syphilis were also HIV positives. The majority of these were known with HIV and were diagnosed with syphilis in connection with the regular HIV check-ups at infection medicine clinics, but 13% of the MSM with syphilis who were notified as HIV positives had been diagnosed with HIV and syphilis simultaneously. Syphilis among HIV-negative MSM is a marker for risk behaviour, because condom-free sex cannot only transmit syphilis, but also HIV (and the remaining sexually transmitted diseases).

HIV-negative MSM who contract syphilis repeatedly are at an increased risk of contracting HIV compared with those who are only diagnosed with syphilis once. This group is therefore an obvious candidate group for enhanced measures against HIV infection, EPI-NEWS 20-21/2015. In this context, it will probably soon be possible to give so-called pre-exposure prophylaxis (PrEP) against HIV. This is recommended by the WHO as well as the UNAIDS for persons at special risk of contracting HIV as a supplement to condoms, which for some people is not anexpedient prophylactic measure.

The share (particularly among MSM) who has been tested for HIV is very high. This is encouraging, and it is still important that MSM who are tested for syphilis also be tested for HIV, EPI-NEWS 46/09, lymphogranuloma venereum (LGV), hepatitis B & C, and gonorrhoea.

Correct diagnosis and staging are important for the treatment of the individual syphilis patient as well as for monitoring efforts. Tentative diagnoses based on positive serological screening results should therefore be verified through extended serological tests. It is particularly important that pregnant women who are screened for syphilis receive full serological testing so that their diagnosis may be confirmed or dismissed within the relative short time period within which treatment may prevent transmission to the foetus, EPI-NEWS 35/15.

A fourth of the cases diagnosed in other places than the SSI were not notified to the NSID. The greater the share of diagnosed cases is notified, the better the epidemiological monitoring will be.

Newly acquired syphilis, i.e. primary and secondary syphilis, is notified to the Department of Infectious Disease Epidemiology, Statens Serum Institut (SSI) on Form 1510, which is available for download at www.ssi.dk.

As from July 2015, the full civil registration number (CPR) of the patient needs to be stated on the form, whereby monitoring is improved. The new form also includes the questions which previously were stated on a separate white form from the SSI's syphilis laboratory and which, among others, facilitate staging. The latter form is therefore no longer used, which eases the work of the notifying physicians.
(S. Cowan, A. H. Christiansen, Department of Infectious Disease Epidemiology, S. Hoffmann, Microbiology and Infection Control)

Outbreak of polio-like disease in the Ukraine

Two children from South-West Ukraine have presented with symptoms of infant paralysis (poliomyelitis) caused by a special polio virus.

The two children aged 4 years and 10 months, respectively, were affected by a polio-like disease already on 30 June and 7 July 2015. It has now been determined that their condition was caused by a vaccine strain of type 1 poliovirus, which has reacquired its disease-causing properties.

The WHO is in dialogue with the national Ukrainian health authorities to implement several national vaccination campaigns as soon as possible covering all children below 5 years of age with a view to curbing the outbreak.

So-called circulating vaccine-derived polio viruses (cVDPV) are well-known and originate from populations with an insufficient vaccination coverage. The vaccine strain - which is taken orally and then excreted in faeces - can therefore circulate in the population and slowly reacquire the ability to cause polio. In 2015, this was also seen in Madagascar, where a total of 9 cases of cVDPV had been detected by 7 July.

Ukraine has been at increased risk of outbreaks of infectious diseases due to low vaccination coverage for a considerable period of time. Thus, in 2014 only half of all children received full polio vaccination and other vaccine-preventable conditions.

All travellers to areas where polio occurs should be fully vaccinated against polio in a manner equivalent to the vaccinations provided in the Danish childhood vaccination programme. It has yet to be established whether the WHO will introduce recommendations on polio vaccination for travellers from Ukraine like those currently in place for travellers from a series of countries where polio occurs, primarily Pakistan and Afghanistan, EPI-NEWS 26a+b/15.
(P.H. Andersen, Department of Infectious Disease Epidemiology)