Phasing-out of the temporary vaccination programme

Since 15 January 2014, the childhood vaccination programme has temporarily employed other vaccines than the ones normally provided by Statens Serum Institut (SSI), EPI-NEWS 50/13 and 3/14. This has, among others, meant that children receiving the temporary programme were also vaccinated against hepatitis B.

The SSI's primary vaccine (DTaP-IPV/Hib) is now once again available, EPI-NEWS 42-43/14, and the temporary vaccination programme will therefore start being phased-out as from 1 January 2015.

It is important to stress that no decision was made to introduce vaccination against hepatitis B in the childhood vaccination programme, and that the only reason for providing the vaccination was that the vaccine available (Infanrix hexa®) to substitute the normal SSI vaccine (DTaP-IPV/Hib) also included the hepatitis B component, EPI-NEWS 50/13. The strategy adopted by Denmark concerning recommendation of vaccination for special risk groups however remains in place.

The SSI's DTaP-IPV Booster vaccine for booster vaccination at 5 years of age will also become available as from 1 January 2015. This means that children will once again receive their booster vaccination with one vaccine after this date, and that the programme comprising polio vaccine (IPV) and dTap-vaccine as two separate injections will be discontinued.

During the transition period, it is also very important that the correct service codes are used for each vaccine.

Children who initiate their course under the childhood vaccination programme

Children who initiate their course under the childhood vaccination programme as from 1 January 2015 shall receive primary vaccination with the SSI's DTaP-IPV/Hib vaccine (code 8341), Figure 1. Infanrix hexa® shall not be used as the first primary vaccine after this date. The special settlement code for the first Infanrix hexa® (8350) will be blocked as from 1 February 2015, and the service will be rejected after this date.

Children who have received a minimum of 1 Infanrix hexa®, and who are therefore partly vaccinated against hepatitis B, should conclude their vaccination with 1 or 2 Infanrix hexa® at 5 and/or 12 months of age (code 8351/8352), Figure 1.

In principle, it is possible to exchange the vaccine of one producer with that of the other producer at any point during the course of the vaccination series. We recommend, however, that the first two primary vaccinations, given at 3 and 5 months of age, be administered using the same vaccine. Children who have received the first Infanrix hexa® should therefore also receive the second and preferably all three primary vaccines as Infanrix hexa®.

Engerix-B® shall subsequently be given at least 1 month and 6 months after the first hepatitis B-containing vaccine (Infanrix hexa®). Provided the child is not presently at increased risk of hepatitis B, the conclusion of the vaccination may be postponed until the MMR vaccination at 15 months of age and until the 2-year examination, provided that this is possible before the end of 2015 when the offer expires.

Booster vaccination at 5 years of age

As from 1 January 2015, the SSI's DTaP-IPV Booster will once again be used for booster vaccination at 5 years of age, Figure 1. The children will therefore need only a single injection as opposed to the two injections needed under the temporary programme. As previously, service code 8325 is used. The temporary codes for dTap (8356) and IPV vaccine (8355) will be blocked as from 1 February 2015, and the service will be rejected by the region after this date. 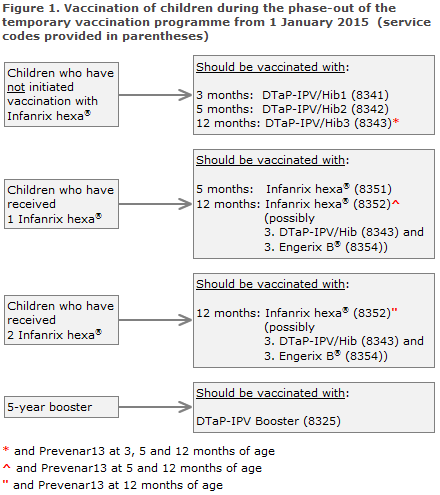 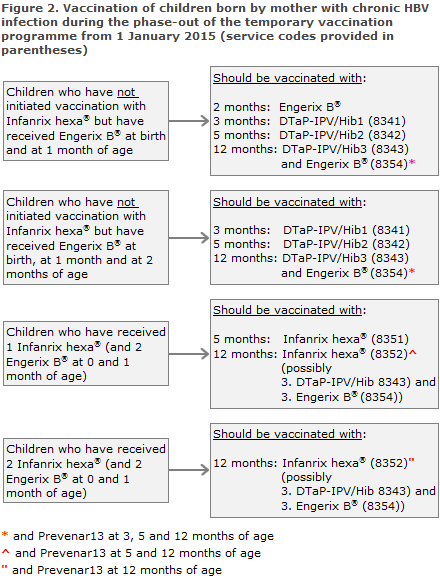 In situations in which the child's vaccination status does not comply with the above treatment courses, healthcare staff are invited to contact the Consultancy Team, Department of Infectious Disease Epidemiology, by phone (3268 3037) or in writing via epiinfo@ssi.dk.

How to order vaccines

For conclusion of initiated hepatitis B vaccination series, it will be possible to order paediatric doses of the hepatitis B vaccine ”Engerix-B®”, SSI Item no. 17606, until the end of 2015. When ordering the vaccine for this purpose, checkbox "B" for “børnevaccinationsprogram” (Danish for childhood vaccination programme) should be checked, EPI-NEWS 18/14.
All vaccines may be ordered via the SSI's electronic Form 6.

The SSI will not take back vaccines provided for use in the temporary vaccination programme. We therefore urge you not to order more vaccines than you expect to use.
(P.H. Andersen, P. Valentiner-Branth, L.K. Knudsen, Department of Infectious Disease Epidemiology, B. Neale, Sales and Business Development, HSEM, the Danish Health and Medicines Authority)

Continuous reporting of vancomycin-resistant enterococci at the SSI's website

Then the occurrence of VRE increased; initially in connection with outbreaks at hospitals in the Central Denmark Region (2010-2011) and subsequently at hospitals in Region Zealand and in the Capital Region of Denmark (2012-2013), EPI-NEWS 16-17/14. So far, the occurrence of VRE has been reported in the annual DANMAP report; but as from the beginning of December 2014, it will be possible to follow the development continuously at the SSI's website “Overvågning i tal, grafer og kort” under ”laboratorieanmeldelser” (in Danish language).