Enterococci (Enterococcus faecalis and Enterococcus faecium) occur naturally in the intestinal flora, but can cause urinary tract infections and serious infections such as endocarditis and other forms of sepsis, particularly among elderly patients with pre-disposing conditions.

Enterococci are inherently resistant to a wide range of antibiotics. Vancomycin is the primary treatment in severe infections with antibiotic-resistant enterococci, but an increasing occurrence of vancomycin-resistant enterococci (VRE) has been observed both in Denmark and internationally. Furthermore, many VREs are resistant to ampicillin and gentamicin, and very few treatment options are therefore available. Linezolid and daptomycin may be used in the treatment of VRE, but both antibiotics are associated with serious side effects.

Since 2005, all Danish departments of clinical microbiology have had the option to voluntarily submit their VRE isolates to the Reference Laboratory for Antimicrobial Resistance at Statens Serum Institut for determination of vancomycin resistance genes (vanA, vanB, vanC) and for use for national monitoring, Figure 1 and EPI-NEWS 43/13. 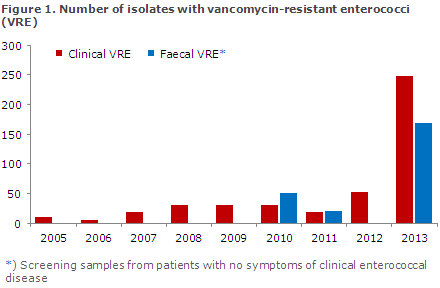 2010 and 2011 witnessed an increase in vanA Enterococcus faecium at hospital departments in Region Central Denmark. Typing of the isolates confirmed outbreaks with several clones. The increase in the occurrence of clinical VRE isolates continued in 2012 when the SSI received 54 VRE isolates from urinary tract infections, wound infections and blood infections (only a single isolate per patient was counted). In 2013, the number rose to 248 clinical VRE isolates. The majority of patients who had VRE infections were older than 60 years. Additionally, in 2013 a total of 168 isolates were detected through faeces screening in patients with no clinical symptoms, Figure 1.

The 2013 increase was mainly seen in hospitals located in Zealand, particularly in the Capital Region of Denmark, but also in Region Zealand. The number of isolates recorded in the Central Denmark Region continued to be increased, and the remaining regions also recorded VRE, but to a more limited extent. The overwhelming majority of the VRE isolates from 2012 and 2013 were of the type vanA E. faecium.

Typing of isolates from 2012 and 2013 shows that several strains are spreading. However, the same clone types also spread both within hospitals and between hospitals. The cause of the increased occurrence remains unknown, but it co-occurs with an increased use of vancomycin for treatment of serious Clostridium difficile infections, which also mainly occurred in Zealand.

The described VRE spreading causes concern as the treatment options for serious VRE infections are limited. Experiences from both Denmark and abroad demonstrate that a prolonged and intensified focus is required if we are to control VRE. Relevant measures include screening and isolation of VRE patients at hospitals.

This is probably so because the community is a major source of infection, and because VRE may be carried asymptomatically in the intestine. No treatment is available for the carrier state. The known screening methods are time- and resource-demanding, and initiation of supplemental infection hygiene precautions is therefore a major challenge for hospitals and for the nursing sector.

At present, no national infectious hygiene guidelines on VRE have been published, but guidelines are currently being considered due to the detected increase. Local awareness of VRE infections is essential in limiting further transmission.
(A. M. Hammerum, L. Jakobsen, B. Kristensen and R. Skov, Department of Microbiology and Infection Control)

In 2013, a total of 12 persons were notified with psittacosis (parrot fever), which is caused by the zoonotic bacterium Chlamydophila psittaci. The cases counted one woman and 11 men, and the median age was 58 years (range 45-84 years). Eleven cases were recorded as having been infected in Denmark and one abroad.

All patients had been admitted to hospital, and their diagnosis was confirmed by PCR. In 11 cases, the sampling material was lower airway secretion, and in one case it was a swab from the upper airways.

Seven patients had pneumonia. In three cases, the clinical particulars were unavailable, but the cases were probably pneumonia (based on the sampling material). In one case, the disease required treatment in a heart-lung-machine (ECMO treatment).
In two cases, pneumonia was absent, but a high fever, coughing or influenza-like symptoms were recorded. For clinical particulars and routes of infection, please see EPI-NEWS 5/08 and EPI-NEWS 19-20/10.

In two cases, the infection was believed to have transferred from wild birds either in a garden or at work, one via a goose in a garden, two via hunting/feeding of ducks and/or pheasants, two cases from indoor birds, one from a private pigeon keep, and one from cleaning of a private henhouse. In one case, there was no known exposure to birds. In two cases, the possible source of infection was not provided on the notification.

The Region of Southern Denmark accounted for the bulk of the recorded cases: 6 of 12. Among the remaining cases, two were from the Capital Region of Denmark, one from Region Zealand and three from the Central Denmark Region. In 2013, no epidemiological connection was detected between any of the cases.

The number of notified psittacosis cases was at par with that observed in previous years. The condition is most frequently diagnosed in middle-aged men, who are primarily infected due to hobby contact to birds.