As from 15 January 2014, children who initiate vaccination under the childhood vaccination programme are to receive a hexavalent vaccine which protects against hepatitis B in addition to providing protection against diphtheria, tetanus, pertussis, polio and Haemophilus influenzae B-infection. The vaccine is called Infanrix hexa®. Children who have initiated vaccination under the childhood vaccination programme prior to this date shall, to the extent possible, conclude vaccination with the normally used primary (DTaP-IPV/Hib) vaccine provided by Statens Serum Institut (SSI).

As presented in EPI-NEWS 49/13, a situation has arisen in which the normally used child vaccines from the SSI are in short supply. The SSI expects to have exhausted the stock of vaccines as follows:

1) The SSI's basic vaccine DTaP-IPV/Hib, SSI item no. 43726, given at 3, 5 and 12 months of age will be out of stock during the first quarter of 2014. However, DTaP-IPV/Hib can be ordered from the SSI while stocks last. As usually, we recommend that orders be placed continually and as needed.

2) The SSI's booster vaccine protecting against diphtheria, tetanus, pertussis and polio (dTap-IPV booster), SSI item no. 54198, given at 5 years of age, is already out of stock at present.

The SSI expects to be able to provide the two vaccines again sometime during the autumn of 2014.

The primary vaccine Infanrix hexa® is produced by GlaxoSmithKline, has been approved by the European Medicines Agency (EMA) and is being used in many European countries. The vaccine is approved for administration in a 3-, 5- and 12-month basic programme and can be given concurrently with Prevenar13. When Infanrix hexa® and Prevenar13 are administered concurrently, the two should be given in opposite extremities.

Several of the antigens are adsorbed to aluminium in line with the SSI's vaccine. Hib is conjugated to tetanus toxoid. Like Engerix-B pæd®, hepatitis B surface antigen is produced in yeast cells through recombinant DNA technology.

Just like the primary SSI vaccine, Infanrix hexa® is supplied as a powder in a vial and suspension for injection in a pre-filled syringe, which are mixed before injection. An additional syringe is included for the injection. The vaccine is given as a deep intramuscular injection and the producer recommends using different injection sites for the subsequent injections.

Three doses of hepatitis B containing vaccine are fully sufficient in immunocompetent children and children who are not born by hepatitis B carrier mothers. Antibody testing is unnecessary, EPI-NEWS 11/13. The protection achieved is presumed to be life-long.

For information about more rarely observed adverse reactions (including hypersensitivity to neomycin and polymycin, among others) and special warnings and precautions concerning the use of the vaccine, please refer to its summary of product characteristics which is available for download at www.ema.europa.eu.

The Danish Health and Medicines Authority recommends that the Danish package leaflet of the used vaccines be handed out to the parents at the vaccination session. The package leaflet for Infanrix hexa® is provided by the SSI with the vaccine and will also be available for download from www.indlaegsseddel.dk before we start dispensing the vaccine (in Danish).

As the vaccine has not previously been used in the Danish childhood vaccination programme, the Danish Health and Medicines Authority has decided that Infanrix Hexa® will be subject to an enhanced duty of notification meaning that doctors are under an obligation to notify all presumed adverse reactions in persons to which they administer the vaccine.

The monitoring of the vaccination programme's coverage is based on the settlement codes. Consequently, it is essential that the correct codes be used. Initially, settlements go to the national health insurance, Sygesikringen, and a validated register is then imported to the Danish Vaccination Register (DVR).

The SSI will seek to establish temporary codes for the settlement of vaccination with Infanrix hexa®, hepatitis B vaccine and dTap booster and polio vaccine given as separate injections. This is necessary to facilitate monitoring of any adverse reactions and for the identification of those children who have been vaccinated against hepatitis B. The temporary codes will be published in EPI-NEWS in the beginning of January 2014.

The vaccination cards usually handed out to parents will not be printed for the temporary vaccine change. Instead, the doctor will make a note that a hexavalent vaccine has been given and will indicate its batch number.

Every year, approx. 180 children are born by hepatitis B virus (HBV) carrier mothers. This group of children are at special risk of HBV infection through mother-to-child infection, EPI-NEWS 4/13. It is essential that labour and delivery staff continue to vaccinate the neonates and administer immunoglobulin, and that the child’s GP, as previously, gives the second vaccination at 1 month of age (e.g. at the 5-week examination). Normally, post-exposure prophylaxis with Engerix B pæd® is concluded when the children are 2 and 12 months old. During the temporary vaccine change, this is done with one or more doses of Infanrix hexa®, see below and Figure 2.

Children who have received two doses of Engerix-B pæd® (at birth and at 1 month of age) and who have not initiated DTaP-IPV/Hib vaccination are vaccinated three times with Infanrix hexa® at 3, 5 and 12 months of age. Giving a total of five hepatitis B containing vaccines entails no risk.

Children who have received three Engerix-B pæd® (at birth and at 1 and 2 months of age) and two DTaP-IPV vaccinations should receive Infanrix hexa® at 12 months of age.

In situations in which the child's vaccination status does not comply with the above treatment courses, healthcare staff are invited to contact the Consultancy Team, Department of Infectious Disease Epidemiology, by phone (3268 3038) or in writing via epiinfo@ssi.dk. 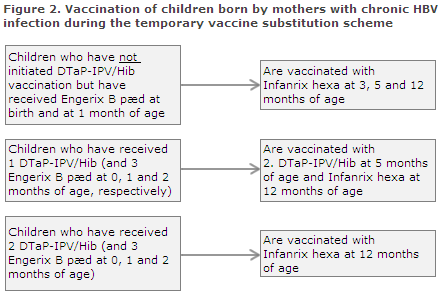 Hepatitis B infection is a rarely occurring disease in Denmark. Based on a recommendation from the Danish Health and Medicines Authority, it was therefore previously decided that hepatitis B vaccination would not be introduced into the childhood vaccination programme. Instead, Denmark has followed a risk group strategy which recommends vaccination of special risk groups.

This strategy mainly targets infants born by mothers with chronic HBV infection, but it also includes e.g. contacts to chronic hepatitis B infected persons, healthcare staff, IV drug users, men who have sex with men, etc.; please refer to the Danish Health and Medicines Authority's guideline on HIV, hepatitis B and C virus from 2013 (in Danish), EPI-NEWS 11/13 (indsæt link). Furthermore, hepatitis B vaccination is recommended for prolonged travels abroad (or risk behaviour during travels) to a wide range of countries, EPI-NEWS 26b/13.

A free HBV infection screening offer for pregnant women was introduced as a trial measure in 2005 and was made permanent in 2007. The general hepatitis B screening has been in place for more than seven years, and the screening and follow-up vaccination are now starting to take effect. Thus, the number of children and adolescents notified as having been infected with hepatitis B during labour in Denmark has decreased from approx. ten children annually in the years leading up to 2007 to 1-3 children annually at present, EPI-NEWS 22/13.

In 2012, 191 pregnant hepatitis B positives were found among 63,996 screenings performed (0.29%), which was at par with previous years, and a total of 118 women tested HBsAg positive for the first time. On the basis of a survey of several national registers, it is estimated that approx. 11,000 persons have chronic hepatitis B in Denmark, of whom about two thirds have been diagnosed. Consequently, the prevalence in adults is estimated to be 0.24%, which is lower than that seen in our neighbouring countries.

The favourable epidemiological trend in Denmark means that there is still no medical basis for the introduction of a general hepatitis B vaccination offer for children. Children who initiate a vaccination series with a vaccine containing hepatitis B are only given the opportunity to conclude the vaccination to avoid any subsequent doubt as to whether they are protected against hepatitis B or not.
(P.H. Andersen, P. Valentiner-Branth, L.K. Knudsen, A.H. Christiansen, Department of Infectious Disease Epidemiology, S. Brostrøm, Danish Health and Medicines Authority)