Update of the SSI's recommended vaccinations for foreign travel

As in previous years, Statens Serum Institut and a reference group have revised the country-specific recommendations for prevention of infectious diseases in connection with travels abroad:

On 17 May 2013, the WHO announced that a routine yellow fever booster every ten years is no longer recommended. Instead, a single vaccination should be considered to provide life-long protection.

This implies that travellers to yellow fever endemic areas who previously received yellow fewer vaccination should no longer routinely be recommended re-vaccination.

Tuberculosis vaccination in the form of BCG is still recommended for travellers to endemic areas with a TB incidence > 25/100,000 who stay there for prolonged periods or go there repeatedly, i.e. travellers who have a minimum of 3-6 months of exposure.

The best documentation for the BCG vaccine's efficacy has exist for children and adolescents. Vaccination is recommended for children who visit their own or their parents' country of origin, even for short periods of time, and thereby come into contact with the local population, provided that the area's tuberculosis incidence exceeds the above stated threshold, see EPI-NEWS 26b/13 and www.ssi.dk/rejser (select ”sygdomsforekomst ” and ”tuberkulose ”).

Vaccination of adults who plan to travel for an extended period of time is not recommended routinely, but it may be considered to vaccinate very exposed persons, e.g. healthcare professionals who come into contact with TB patients.

The vero-cell derived JE vaccine Ixiaro® is presently used for JE vaccination, EPI-NEWS 25/10. The vaccine has now been approved as from two months of age, EPI-NEWS 10/13. Children aged from two months to three years should receive half the normal dose.

As previously, two doses are given at a 4-week interval, and re-vaccination (boosting) is performed after 12-24 months. The interval before the booster depends on exposure. In cases with continued exposure, the booster should be given after 12 months.

Protection of the pregnant traveller

When pregnant women travel to areas with an increased risk of infectious diseases, some of these diseases constitute a special hazard for the woman or the foetus, e.g. malaria and rubella. The pregnant woman should, if possible, receive prophylactic treatment to the same level and on the same indication as that on which such treatment is given to other travellers, EPI-NEWS 26b/13.

In cases in which relevant prophylaxis cannot be offered, the pregnant woman should carefully consider if the travel may be cancelled or postponed until after she has given birth.

The authority-approved summary of product characteristics (SPC) covering the individual vaccines is instructive only, but it may be more restrictive than suggested by scientific evidence. The majority of the vaccines should be given only if the pregnant woman has a specific, increased risk of exposure.

The WHO publishes ”International Travel and Health”, www.who.int/ith, describing, among others, the risk trade-off associated with vaccination of pregnant women. The WHO has also issued the below general considerations concerning pregnant travellers.

Travelling by flight is not generally contraindicated for pregnant women with an uncomplicated pregnancy. When travelling after gestational week 28, pregnant women should carry a letter from a GP or a midwife stating the expected date of birth (term), and that the pregnancy has had a normal course.

Flying late in pregnancy should be avoided, i.e. after week 36 for singleton pregnancies and after week 32 for multiple pregnancies. The rules and provisions of the airline company should be checked in advance. Flying during a complicated pregnancy always requires medical authorisation.

Venous thrombosis is more frequent during pregnancy, and even though the absolute risk is small, pregnant women who board flights lasting more than three hours should wear well-fitting support stockings because travellers are generally limited to confined spaces and stay sedentary for extensive periods of time.

Travels which require pregnant women to sleep at altitudes exceeding 3,000 meters above sea level without gradual acclimatization and travels to remote areas should be avoided.

Inactivated vaccines such as polysaccharide, toxoid and conjugate vaccines may be given following specific exposure which has put the pregnant woman at risk. Such exposure exists if the pregnant woman travels to a country for which vaccination is normally recommended for travellers, EPI-NEWS 26b/13. Vaccines containing live attenuated virus or bacteria involve a theoretical risk for the foetus and should generally not be used, Table 1.

Vaccines which may be given routinely to pregnant women

Routine use means that the vaccine may be administered to pregnant women even in the absence of a specific, increased risk of infection, i.e. also to women who are not currently planning a travel abroad.

Influenza vaccination may be indicated for travellers at increased risk of suffering complications during influenza illness, and the circulating strains are not necessarily the same in the two hemispheres, EPI-NEWS 21-22/06. Seasonal vaccination for the Northern Hemisphere will therefore not necessarily provide full protection for persons travelling to the Southern Hemisphere, where the influenza season is the summer.

Vaccination is recommended for healthy pregnant women in their second and third trimester, and pregnant women with medical factors increasing the risk of a serious influenza course should be vaccinated at any point during their pregnancy, EPI-NEWS 39a/12.

Hepatitis A vaccine is made from killed virus and may be given to pregnant women, if needed in combination with hepatitis B vaccination.

Hepatitis B vaccine is made from parts of virus (HBsAg manufactured by recombinant DNA technique) and may be given alone or in combination with hepatitis A vaccine.

Rabies vaccine may also be given safely to pregnant women, both pre and post exposure.

Typhoid fever vaccine is available as a live attenuated oral vaccine and as an inactivated vaccine for injection. According to the WHO, the safety data concerning pregnant women are currently insufficient for the live attenuated oral vaccine (Vivotif®).
In theory, the TBE (TicoVac®) and Japanese encephalitis (Ixiaro®) vaccines could be used as these are inactivated vaccines. Even though empirical evidence is missing, these vaccines may be given to pregnant women belonging to the category of travellers for whom the vaccines are recommended, but they should not be used for routine booster vaccination.

Whooping cough vaccination of adults is included in several registered vaccines, and for adults the SSI has also obtained registration of a booster vaccine comprising whooping cough, the diTekiBooster®. This vaccine is registered for the 5-55-year age group and is now being marketed.

Vaccines that should be avoided in pregnant women

For rubella vaccine, however, which is theoretically associated with more risk, foetal harm due to maternal and foetal viraemia has never been described. The same applies to the measles vaccine and the combined MMR vaccine. Abortion is therefore not indicated in case a pregnant woman is unintentionally vaccinated with a live vaccine or becomes pregnant within a three-month period following vaccination (one month for the MMR vaccine, MMR VaxPro®).

The chickenpox vaccine (Varilrix) should not be given to pregnant women, but as pregnant women have an increased risk of complications to chickenpox, seronegative pregnant women should be vaccinated upon giving labour to ensure immunity prior to any subsequent pregnancies.

Vaccines that are not usually indicated in pregnant women

Polysaccharide vaccine against pneumococci (Pneumovax®) is not recommended as a travel vaccine, but may be given if the pregnant woman is at increased risk of invasive pneumococcal disease, EPI-NEWS 51b/12.

The conjugate pneumococcal vaccine (Prevenar13®) is not registered for use in the 18-49-year age interval, which includes the overwhelming majority of women of child-bearing potential, but the Danish Health and Medicines Authority offers a limited subsidy for the same risk and age groups as for Pneumovax®. No data are available on the use of 13-valent conjugate pneumococcal vaccine in pregnant women.

The HPV vaccine is offered as part of the Childhood Vaccination Programme, primarily to young women before their sexual début, but currently also in the catch-up programme which includes women up to the age of 27 years. Vaccination is not relevant where travelling is the sole condition, and the remaining vaccinations should be postponed until after the pregnancy if pregnancy occurs before the vaccination series has been concluded.

Malaria in pregnant women increases the risk of maternal death, anaemia, abortion, stillbirth and low birth weight with ensuing risk of neonatal death. Pregnant women should therefore be warned of the risk associated with travelling to malaria endemic areas, including areas where vivax malaria is dominant. This is particularly important in connection with travels to areas where malaria parasites are resistant to the prophylactic drugs that may be given to pregnant women, Table 2. 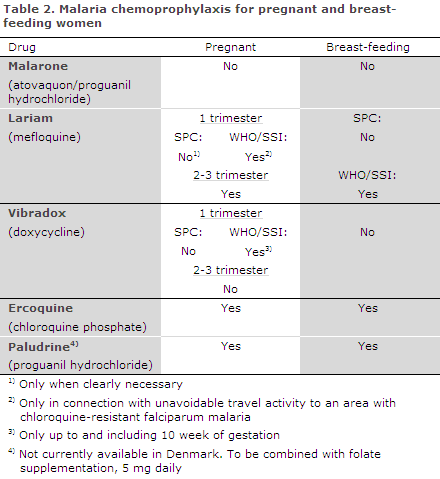 The only medicinal products that are registered for use in Denmark and which may be used throughout the pregnancy are chloroquine, which is primarily for use in areas with a risk of vivax malaria, and mefloquine. Mefloquine was previously not recommended in the first trimester, but may be used if the pregnant woman insists on travelling to an area with extensive chloroquine resistance, as the risk associated with malaria by far exceeds the theoretical risk associated with prophylactic treatment.

Generally, mefloquine prophylaxis is used rarely in Denmark due to the risk of neuropsychiatric adverse reactions, and special efforts should be made to avoid contraindications and to ensure that the pregnant woman has understood the risk and knows how to handle this risk. Currently, the Danish Health and Medicines Authority has limited the issue of Lariam® to hospitals and specialists of infectious medicine or clinical microbiology.

The combination of chloroquine and proguanil, which has been extensively used for pregnant women, has only limited prophylactic effect against falciparum malaria in nearly all areas, and proguanil (Paludrine) is not presently being marketed in Denmark.

Doxycycline prophylaxis may be used in the first trimester of pregnancy (up to and including the tenth gestational week), but as it may cause damage to bone primordium and dental germ as from the fifth month of pregnancy, careful counselling is required including certain determination of the term date and a decision on what will be given in the 28-day period following the journey.

Pregnant women are particularly exposed to mosquito bites, and extra careful primary prophylaxis including the use of impregnated mosquito nets and mosquito repellent balm is required.

No studies are available on the use of picaridin (Autan®), and only very few studies of DEET have been performed in pregnant women. Even though specific foetal harm has not been described, percutaneous use of these drugs should be minimized.

This is done by recommending that pregnant women stay indoors after dusk. When staying outdoors, long-sleeved clothes should be used to cover legs and arms so that the drugs will only need to be applied to the remaining exposed skin areas. If possible, the clothes should be impregnated with a repellent or an insecticide.

Despite any use in pregnant women, it is still recommended that pregnancy be avoided one week after doxycycline, three weeks after Malarone and three months after mefloquine treatment. If pregnancy occurs during use of chemoprophylaxis, this does, however, not constitute indication for induced abortion.