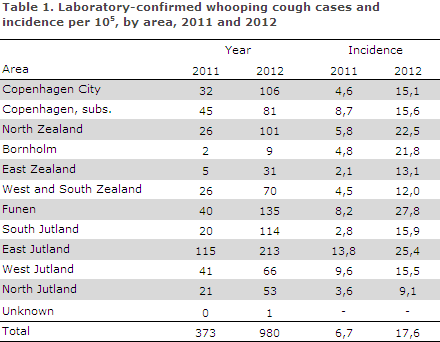 Distribution by age and sex and age-specific incidence are presented in Table 2. 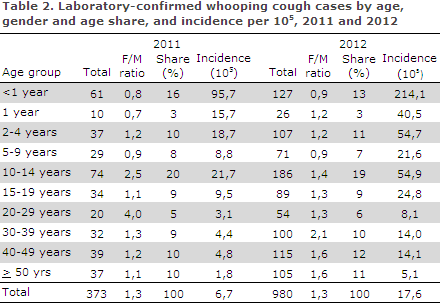 The age group of 15 years and above comprised 43 % and 47 % of all detected cases in 2011 and 2012, respectively. As in previous years, there were more female than male cases among larger children and adults.

PCR testing has been the most widely used method for whooping cough diagnosis for a long period of time and 78 % and 72 % of the total number of detected whooping cough cases were detected by PCR in 2011 and 2012, respectively, Figure 1. 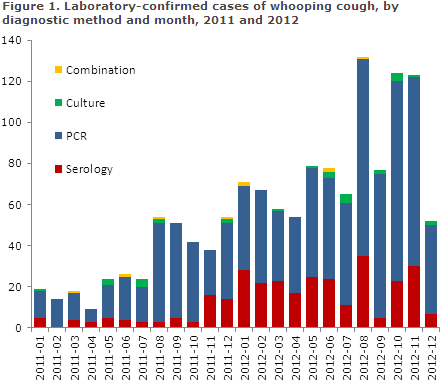 Serological diagnostics are gaining ground for diagnosis of adolescents and adults. The method was introduced at Statens Serum Institut at the beginning of 2010, and 29 % and 41 %, of all cases in the 15-years and above age group were detected by serology in 2011 and 2012, respectively, Figure 2. 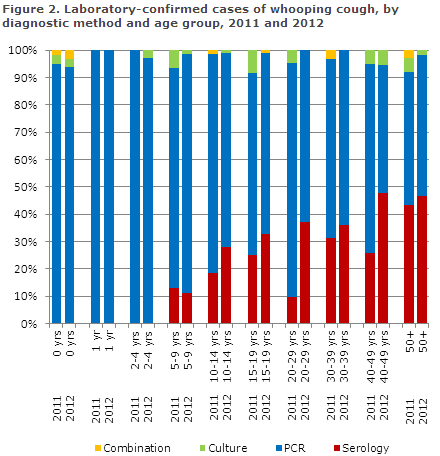 Serology can only be used to diagnose patients above 7 years of age. Culture comprised 3 % and 2 % of all cases detected in 2011 and 2012, respectively.

The introduction of the so-called SSI "Coughing Package" (serological diagnostics for whooping cough, mycoplasma and chlamydia pneumonia) in November 2011 contributed in particular to the total increase.

The increased whooping cough incidence observed in the first half of 2012 was described in EPI-NEWS 41/12 which, along with the subsequent media attention, probably encouraged the submission of samples and thus contributed to the increased number of detected cases in October and November 2012, Figure 1.

The increase, however, has since levelled off, but the current level nevertheless remains higher than levels seen in previous years.

Normally, a seasonal variation is observed with more cases in the second half of the year. It is important for the continued molecular-genetic monitoring of the bacterial population that culturing continues, at least to some extent.

The increasing trend is seen in most of Europe and in the US and Australia. Furthermore, a clear increase is observed in the number of whooping cough cases in larger children, adolescents and adults.

Part of this increase is owed to novel and improved diagnostic methods, but other contributing factors include increased awareness of the diagnosis and loss of vaccine-induced immunity, as the available whooping cough vaccines only provide 4-12 years of protection.

Cases in adults may cause infection of partly vaccinated or unvaccinated children. Consequently, several European countries have introduced a whooping cough booster vaccination for teenagers. This measure has, among others, been introduced in Austria, Belgium, Finland, France, Germany, Norway and Italy.

Other countries have introduced vaccination of child-bearing women. The vaccine should ideally be given in the beginning of the third semester which is considered safe for vaccination.

This measure was introduced in Great Britain, the US, Ireland and parts of New Zealand. After the vaccination, a high level of antibodies is transferred to the child, and the mother achieves optimal whooping cough protection around the time of birth.

Whooping cough is a very infectious condition, and some countries – e.g. France – have attempted to limit whooping cough infection in particularly vulnerable groups, by using a so-called cocooning strategy, where persons around the unprotected infant are offered vaccination e.g. young couples planning to become pregnant, grandparents, nursery staff and healthcare professionals who come into contact with neonates and infants.

This strategy was also employed successfully during a whooping cough epidemic in California in 2010.

It is generally considered that the current Danish vaccination programme provides good whooping cough control, but a future expansion of the programme is being contemplated in light of the observed shift in age groups following the introduction of the five-year booster vaccination in 2004 with a peak in the incidence among 10-14-year-olds, Table 2, and the increasing detection rate of whooping cough among adults which reveals a "dark figure".
(T. Dalby, Microbiology and Infection Control, P.H. Andersen, Department of Infectious Disease Epidemiology)

In children < 2 years of age, whooping cough is individually notifiable. Form 1515 is to be used in laboratory-confirmed cases.

Small differences between the number of laboratory-confirmed and notified cases < 2 years are caused by different registration and reporting procedures at year’s end.

Based on notifications and/or discharge summaries, no whooping cough deaths were recorded in this age group in 2011 and 2012, but several children were notified with pneumonia and a need for C-pap treatment. 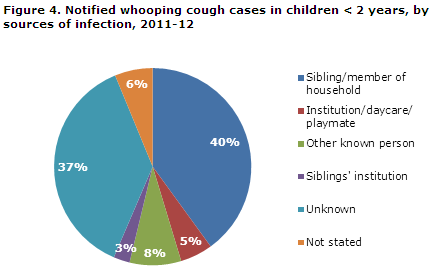 Infection of and by health professionals

A single case of whooping cough infection in a health professional was described in the individual notifications filed in 2012. The mother (32 years of age) of an 11-month-old child monitored another child admitted with whooping cough. She subsequently fell ill with whooping cough and later her own child was infected.

Subsequently, the Medical Officers of Health in the region were involved in contact tracing and in disseminating information to the parents of the smaller and larger children, with whom the health visitor had come into contact with during the infectious period. No information was provided on further infection of infants or other persons.

In 2011, the whooping cough incidence in children below two years of age was at par with that of the previous year, whereas 2012 saw a clear increase. The increase was more pronounced in the first half than in the second half of 2012.

It is unknown to which extent the increased incidence among older children and adults has affected awareness of the whooping cough diagnosis in children below two years of age.

Timely whooping cough vaccination of infants in the form of DTaP-IPV/Hib is essential as significant protection against whooping cough is only achieved after two vaccinations. The recommended vaccination times at 3, 5 and 12 months of age should be followed to the extent possible.

Furthermore, a DTaP-IPV booster is recommended at five years of age. In unvaccinated or partly vaccinated children < 2 years, who are exposed to whooping cough, antibiotic prophylaxis should be considered in accordance with the guidelines described in EPI-NYT 41/12.