Statens Serum Institut (SSI) currently receives a number of questions concerning whooping cough, indicating that the occurence in Denmark of the whooping cough bacterium, Bordetella pertussis, may presently be increased. This newsletter brings a summary of the surveillance data available to the SSI as per 9 October 2012.

Whooping cough is highly contagious and a considerable share of the population is susceptible, as both vaccination and previous whooping cough infection only yield 5-10 years of protection.

Timely whooping cough vaccination of infants in the form of DTaP-IPV/Hib is essential as significant protection against whooping cough is only achieved after two vaccinations. The recommended vaccination times at 3, 5 and 12 months of age should - to the extent possible - be followed. DTaP-IPV/Hib vaccination (and PCV13) may be used from two months of age, EPI-NEWS 6/11; however, this is not presently recommended. Furthermore, a DTaP-IPV booster is recommended at five years of age. In unvaccinated or partly vaccinated children < 2 years, who are exposed to whooping cough, antibiotic prophylaxis should be considered in accordance with the guidelines described below.

The first half of 2012 saw considerably more laboratory-confirmed whooping cough cases than the corresponding period of 2011: 408 cases versus 109 cases, Figure 1. 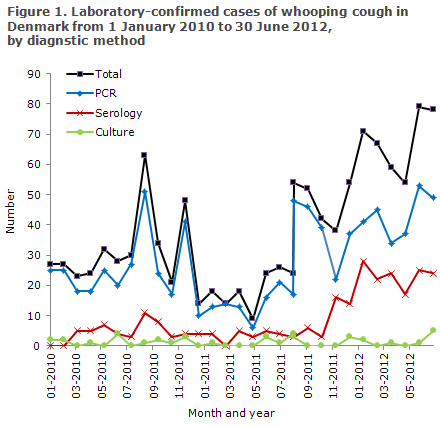 However, a considerable share of the increase among older children and adults may be explained by a widening of the diagnostic repertoire. Previously, it was not possible to detect whooping cough if the patient had had symptoms for more than 3-4 weeks, but following validation of a serological analysis at the SSI, this is now possible in persons above eight years of age who have not been vaccinated within the past two years. In the period from January to August of 2012, serological diagnostics thus comprised 57% of the whooping cough cases confirmed at the SSI, corresponding to to 35% nationally.

Correspondingly, at the five departments of clinical microbiology across Denmark, more cases of whooping cough were seen in the first half of 2012 than in the same months of 2011: 173 and 60, respectively. This should be compared with the number observed in the same period in the years of 2010, 2009 and 2008 when a total of 86, 196 and 201 cases, respectively, were detected.

Distribution by part of country is shown in Table 2. Particularly the City of Copenhagen, North Zealand, West and South Zealand and South Jutland saw considerably higher numbers in the first half of 2012 than in the corresponding periods of the previous four years. 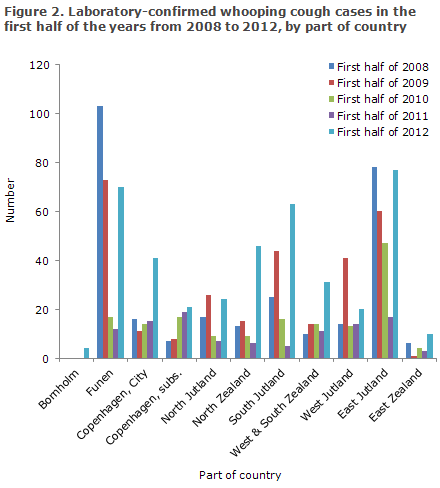 The distribution by age-groups is shown in Figure 3. The primary increase in 2012 occurred in age-groups above ten years, where detection of whooping cough by serology has become increasingly important. 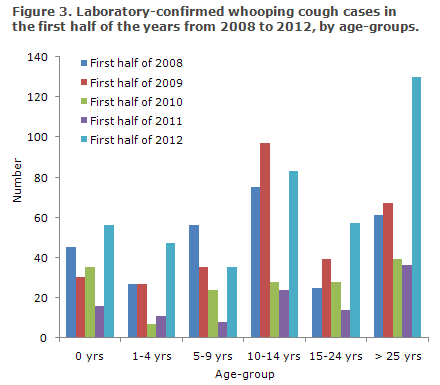 The period up to 9 October 2012 has seen a total of 103 children below the age of 2 years with laboratory-confirmed whooping cough. A total of 88 (85%) were under 12 months of age, and the remaining 15 (15%) were between 12 and 23 months old. When data for January through August from the 2008-2011-period are compared with the same months of 2012, it is clear that the first half of 2012 has seen considerably more notified whooping cough cases than the previous periods, Figure 4. 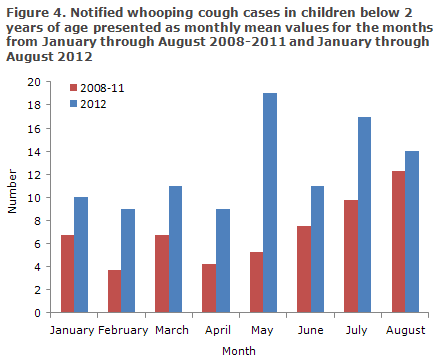 An increasing occurrence of whooping cough was observed in the first half of 2012. The majority of the increase may be explained by a rise in the use of serology for the diagnosis of older children and adults with cough exceeding two weeks, which has contributed to reveal part of the "dark figure" for whooping cough. A corresponding increase was seen in other countries following the introduction of this diagnostic method. Even though whooping cough in older children and adults (including healthcare professionals) is not a severe condition, it is important to establish the diagnosis, as infection may be transferred to younger, unprotected children.

Whooping cough is mainly infectious during the first two weeks, corresponding to the catarrhal and the first part of the paroxysmal coughing stage, and the risk of infection is negligible after three weeks.

Assessment of the degree of exposure is important when deciding on initiation of prophylactic treatment with antibiotics.

Exposure is defined as:

- close contact (face to face),
- direct contact with airways secretions,
- sharing the same room as a symptomatic patient for a minimum of one hour.

Under these circumstances, the risk of transmission to an unprotected person is approximately 80-90%. If the exposure was less intense, an assessment of the need for prophylactic treatment of the exposed person and possibly of household contacts is made on the basis of specific circumstances and factors, particularly the exposed person’s vulnerability.
Macrolide antibiotics are recommended for both treatment and prophylaxis. A Cochrane analysis from 2007 found that, considering adverse event profile and compliance, the more effective treatment regimens were azithromycin (age > 2 years) for three days or clarithromycin for seven days. In case of intolerance to macrolide antibiotics, trimethoprim may in conjunction with sulfamethoxazole be used as an alternative. The risk of infection is minimal after five days of clarithromycin treatment. It should be stressed that the primary function of antibiotic treatment in whooping cough infection is to limit the risk of infection; antibiotics have only a minimal effect on the course of the disease.

Prophylactic antibiotic treatment is initiated to protect children aged < 2 years against whooping cough. The younger the child, the higher is the risk of serious infection and hence the stronger the indication for prophylaxis. As stated above, vaccination only provides significant protection after two vaccinations, and vaccination alone is normally not recommended for post-exposure prophylaxis.

Prophylactic treatment after relevant exposure should thus be considered after swabs have been taken, in:

A negative swab result should not lead to cessation of treatment.

If an unprotected child aged < 2 years is indirectly exposed, e.g. via an older sibling attending a day-care centre with cases of whooping cough, the degree of the primary exposure and the older sibling's protection status should be assessed when considering prophylaxis.

If the older sibling is symptomatic (including common cold symptoms), both children should be swabbed and treated. If whooping cough is confirmed in at least one of them, the whole household should be treated to break the transmission of whooping cough in the family.

On suspicion of whooping cough, specimens should be taken for PCR examination from siblings and other household contacts with unprotected children aged <2 years, even where there is no known exposure. If these persons are more than eight years old and have been coughing for more than two weeks, the throat swab for PCR examination should be replaced by a blood sample for serological testing. If whooping cough is confirmed in at least one of them, the whole household should be treated.

In pregnant women who have whooping cough detected shortly before giving birth, i.e. less than three weeks before term, treatment is initiated immediately. Azithromycin is safe for use in pregnant women in their second and third trimesters of pregnancy. Clarithromycin should not be used due to insufficient data. Both macrolides may, if necessary, be used during lactation. Treatment of the whole household should also be considered. If the child is born within five days after treatment is commenced, the neonate should also be treated.

The Danish Health and Medicines Authority's guidelines for whooping cough in child-care institutions
Children with whooping cough, who seem otherwise unaffected, may attend their child-care institution or school in the period in which a certain risk of infection remains. This is owed to the fact that the overwhelming majority of children have received vaccination. However, children should not attend their institution or school while the spells of coughing are severe enough to cause vomiting or a clear difficulty in breathing. Spells of coughing may be so frequent that the child will need special supervision.