Mother-to-child infection if the primary cause of chronic hepatitis B in Denmark, EPI-NEWS 3/13. Chronic hepatitis B is associated with the development of chronic liver disease and in some cases liver cancer and, consequently, entails a considerable disease burden. If specific immunoglobulin and hepatitis B vaccination are given at birth and followed-up by three subsequent vaccinations, mother-to-child infection can, however, be effectively prevented. On this basis, systematic screening of all child-bearing women for hepatitis B has been in place since 2005, EPI-NEWS 41/05.

The screening scheme was made permanent as from November 2007, EPI-NEWS 42-43/07. Since then approx. 180 annual cases of hepatitis B virus (HBV) infection have been observed, EPI-NEWS 14-15/12. The objective of screening is to ensure that all neonates born by women with HBV infection are vaccinated against hepatitis B. Furthermore, the pregnant women are offered treatment during the pregnancy, which may protect against prenatal transmission from pregnant women with high hepatitis B virus blood levels.

The initial vaccine in the vaccination programme should ideally be given at the place of birth immediately after birth, but remains effective if given up to 48 hours later. The places of birth pay for the vaccine, which is ordered at the regional hospital pharmacy.

The subsequent three vaccines are administered at the GPs. The vaccines may be given in connection with the child's 5-week examination at 4-5 weeks of age, at the mother's postpartum examination and at the child's 1-year examination. The minimum 4-week interval between the first and second vaccination and also between the second and third vaccine are to be observed. These three vaccines may be ordered free of charge from Statens Serum Institut. Procedures and tasks associated with the screening of pregnant women and vaccination of their children is described in the Danish Health and Medicines Authority's guideline on general screening of pregnant women for hepatitis B virus, human immunodeficiency virus (HIV) and syphilis, 2010, www.sst.dk.

The GP receives a fee for every hepatitis B vaccine given in accordance with the prophylaxis agreement, which is available in Danish at www.laeger.dk. Provider numbers are presented in Table 1.

During the first two years with general screening (2006-2007), Statens Serum Institut intensively monitored the scheme. Monitoring efforts included contact to the maternity ward as well as the GP with a view to ensure the complete vaccination sequence for the child, EPI-NEWS 18/06. Monitoring was terminated after the two initial years. We have studied the consequences of this for the vaccination coverage in these children and determined risk factors for lacking vaccination.

Vaccination at GP
Many children did not receive the subsequent follow-up vaccinations at their GP or the vaccinations were administered later than recommended (at 1 month, 2 months and 12 months). At 5 weeks, 10 weeks and 15 months, vaccination coverage was 44%, 43% and 52%, respectively, Table 2. 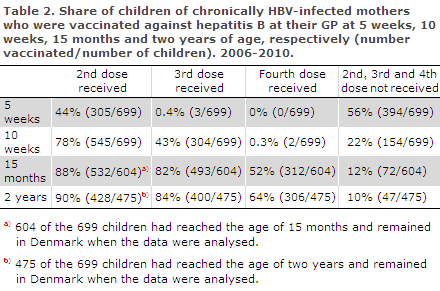 A total of 475 children were followed up to the age of two years, and at such age 64% were fully vaccinated, while 10% of the children had not received a single hepatitis B vaccine at the GP, Table 2. Only a very limited number of children had been given the vaccination earlier than recommended. It was not stated if the three children who had received the third dose before five weeks of age and the two who had revceived the fourth dose before ten weeks of age had been administered the vaccine shortly before (e.g. at an early 5-week examination).

In addition to the considerable variation observed with regard to the vaccination efforts made by the various places of birth, the study revealed that ethnic Danish origin was a marked risk factor for lacking vaccination at the place of birth. Furthermore, children of mothers who had accepted one or more pregnancy examinations, the more the better, enjoyed a superior follow-up vaccination coverage at their GP.

No association was observed between coverage and hospital size, country/city localization or region.

The scheme needs optimization. The initial vaccination is decisive to prevent the child against transmission of hepatitis B from the mother, and 7% adverse events in the form of lacking vaccination at the place of birth is unsatisfactory. Additionally, the efforts made by the places of birth were very inhomogeneous, and it is assessed that routines and procedures are of great importance to vaccination coverage.

It is thus essential that the places of birth ensure correct interpretation of the blood sample results for hepatitis B in order to avoid procedural errors and that pregnancy and birth records are filled-in and read correctly.

The places of birth should be particularly attentive to mothers of Danish origin with chronic hepatitis B because they are not per se considered as being at risk. Furthermore, it is important that the GPs are informed that the vaccination sequence has been initiated and know of the plan for subsequent treatment, etc. stated in the hospital's discharge summary.

The more pregnancy examinations the pregnant women had attended, the greater the probability that their children were vaccinated at their GP. The GPs should pay particular attention to ensure that pregnant women with chronic hepatitis B attend all pregnancy examinations. If it becomes known that a child has not received the vaccination series as recommended, the child should be called in for vaccination.

At the vaccination of the children at the GP, it is important to employ the special provider numbers (ydernumre), which form the basis of any assessment of the vaccination coverage in this group of children. Furthermore, any future possibility to study which vaccines a given person has received depends on correct registration of his or her vaccinations.

Both places of birth and GPs are encouraged to revise their vaccination procedures and routines for the group of pregnant women, mothers with chronic hepatitis B and their children. If several cases of lacking vaccination are observed, measures such as audit and/or analysis of core causes may be relevant. Similarly, mapping of procedures and routines in place at well-functioning practices, etc. may also serve to establish "best practice" in this field. This applies to places of birth, to general practice and to any cooperative schemes connecting the two.