Acute and chronic hepatitis B 2011

2011 saw 18 notifications of acute hepatitis B virus (HBV) infection, including 15 males, Table 1. The median age was 35 years (range 18-57 years). Of the patients notified, 16 (89 %) were born in Denmark, and two (11 %) were immigrants. Among the 16 Danish-born, 14 were infected in Denmark. One was infected in Thailand, and in one case the country of infection was not stated. Ten were infected by heterosexual contact, one by homosexual contact, one via a work-related needle stick injury, and one by drug abuse. In five cases, the source of infection was unknown.

Among the seven persons below 30 years of age, one was infected in Thailand and the rest in Denmark. Three of these were probably infected by a partner with known hepatitis B and/or coming from another country than Denmark. In the remaining three cases, information on sexual transmission was provided, but no further details were available. 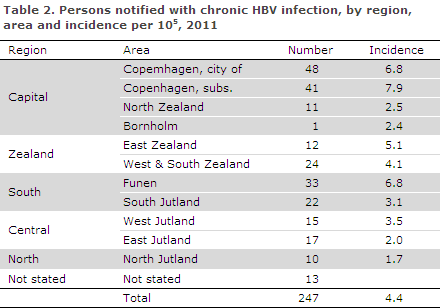 Four persons born by foreign parents were infected at birth in Denmark; all were born before the introduction of routine hepatitis B screening of pregnant women. Ten persons were notified as nosocomially infected, two of these were of Danish origin, one of the two stated having been infected by blood products in Denmark prior to the introduction of donor blood screening in 1983. 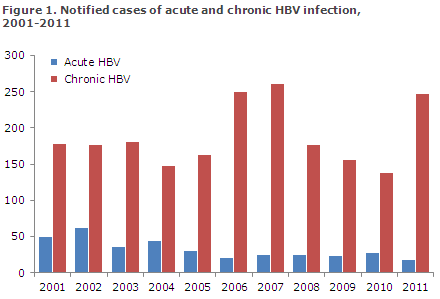 Hepatitis B screening of pregnant women

In 2011 the general screening of pregnant women yielded 181 pregnant HBsAg positives, of whom 114 had not previously tested positive. This number is in line with previous years. EPI-NEWS 14-15/12.

The number of acute notified HBV infections in 2011 remained in line with the low level observed in later years. In the group of young persons below the age of 30 years, a minimum of three cases of sexual infection from a person of foreign origin were observed in Denmark. Even though the number of cases is typically very low, it deserves mention that hepatitis B infection can be prevented by offering free vaccination to persons who have sexual contact with risk group persons.

The number of persons notified with chronic HBV infection increased considerably from 2010 to 2011, and the 2011 numbers are now in line with those observed in 2006-07. This increase is probably due to the fact that the SSI from 2011 has sent out reminders for notifications whenever the pregnancy screening reported cases that had not previously been recorded.

This was also the practice employed in 2006-2007 when the general screening of pregnant women had been introduced as a trial scheme with intensive monitoring. During the trial period, the number of HBV notifications increased, but then decreased again when intensive monitoring was no longer in place, Figure 1. As a consequence of the systematic screening of pregnant women, a high number of chronic hepatitis B cases in women of non-Danish origin is recorded. There is no reason to assume that the male incidence should be any lower. An undiagnosed reservoir thus exists, primarily consisting of immigrant males with chronic hepatitis B.

HBV infection acquired at birth remains the most frequent cause of chronic HBV infection, and in Denmark it mainly affects children of immigrants from highly endemic areas. Screening of pregnant women is therefore the most important activity in the prevention of chronic HBV infection in Denmark. Females who test HBsAg positive during pregnancy should be immediately referred to a specialist department for further assessment and, if relevant, treatment - even if they are symptom-free.

If a child who is born by a HBV carrier is vaccinated at birth and subsequently at 1, 2 and 12 months of age, if can be protected against transmission of the infection. It is therefore important that midwives and obstetricians check if the pregnant woman's hepatitis B status is duly marked in pregnancy and hospital records. It is also important that GPs check if a the pregnant woman has tested positive in a HBsAg test, and - if so - follow up on such result. The Danish Health and Medicines Authority's guideline on general screening of pregnant women is available at www.sst.dk.

Once again it is possible to apply for the two-year European training programme to become a field epidemiologist, EPIET (European Programme for Intervention Epidemiology Training). Participants will achieve skills comprising, among others, monitoring and control of infectious diseases, outbreak tracing and handling, applied research, communication, etc. The programme consists of two years of stationing in another European country. Participants are expected to have undergone relevant training, possess experience in the field of public health and to have an interest in field epidemiology.

It is also possible to apply for a similar two-year European training programme for microbiologists, EUPHEM (European Public Health Microbiology Training). This laboratory training programme is also completed as two years' of stationing in another European country. Programme participants will achieve proficiency in performing independent laboratory tasks in connection with the surveillance and control of infectious diseases, tracing and management of outbreaks, applied research and communication, etc. Participants are expected to have some work experience in the field of microbiology, a PhD degree and an interest in field epidemiology.

Both programmes are offered by the European Centre for Disease Prevention and Control (ECDC) and start as a joint three-week introductory course held mid-September 2013. It is “on-the-job training” and participation in the study programmes is remunerated.

Applicants to EPIET and EUPHEM shall be citizens of the EU, Iceland, Liechtenstein or Norway with proficiency in English. The deadline for application is 3 February 2013.