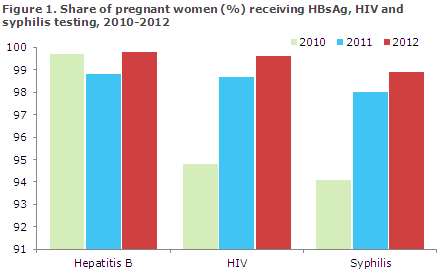 A total of 118 women tested HBsAg-positive for the first time in 2012. Among these, 109 (92 %) were reported to the statutory national hepatitis notification system.

The remaining 73 women (38 %) had previously tested HBsAG-positive.
HBeAg, a marker for disease activity, was detected in 27 (14 %) of the women. HBeAg occurrence was highest among females from South-East Asia, Table 1. 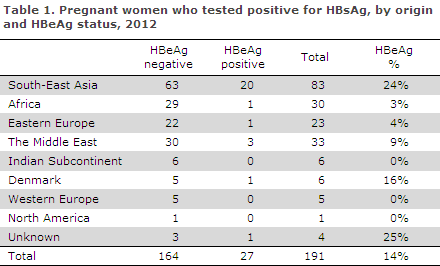 The general hepatitis B screening has been in place for more than seven years and is now starting to take effect. Thus, the number of children infected with hepatitis B during labour in Denmark has decreased considerably, Figure 2. 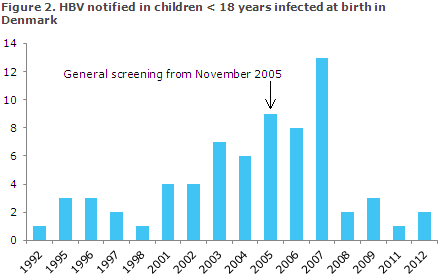 Among 63,876 HIV tests, 34 (0.05 %) were positives. Five women had newly detected HIV and 29 were known HIV positives. All were notified via the statutory national HIV notification system.

They were known to have had HIV for 6-16 years. A total of 18 were from Africa and had resided in Denmark from zero to 12 years.

Two of the remaining cases were from South-East Asia; two were from Eastern Europe and one from South America. They had resided in Denmark for 8-13 years.

Among the 63,372 tests, a total of 100 were positive. Subsequently, 92 of the 100 (92 %) were re-tested by confirmatory serological testing: In nine of these women active syphilis was established, corresponding to 0.01 % of the tested pregnant women.

Owing to the general hepatitis B, HIV and syphilis screening of pregnant women, mother-to-child transmission with these three diseases may be avoided in most cases. Furthermore, newly diagnosed pregnant women may be offered work-up and treatment.

It is therefore important that the treating physician refers any pregnant women diagnosed with one of the three infections to the relevant specialist departments.

In accordance with the Danish Health and Medicines Authority's guideline on general screening of pregnant women for hepatitis B, HIV and syphilis, the woman's partner(s) and other children, should be called in for blood sampling and should be referred to medical specialists if test results are positive. Children and partners of HBV carriers may be vaccinated against HBV free of cost, if they test negative in the above-described test.

The Danish Health and Medicines Authority’s new guideline of 13 March 2013 on HIV and hepatitis B and C virus recommends, that children of carrier mothers who receive hepatitis B vaccination at birth, be tested for vaccination effect and also for current infection one month after finishing the vaccination series.

This is so because studies have demonstrated that inter-uterine infection does occur in some children, in which case the vaccine is ineffective. The GP is responsible for this test. If a child has been infected despite the vaccinations or is insufficiently covered, he or she should be referred to a specialist department.

It is encouraging that the hepatitis B screening is now proving to have effect, Figure 2. As hepatitis B transmitted at birth primarily causes symptoms decades later, some children infected after the introduction of the screening may not have been diagnosed. Once testing for vaccination effect is fully in place, such children will be diagnosed much sooner than is presently the case.

The majority of the pregnant women who test positive for hepatitis B (HBV), HIV or syphilis under the pregnancy screening programme continue to belong to risk groups.

In 2012 like in 2011, a limited number of Danish non-risk group women were diagnosed with HBV and syphilis, whereas HIV was not diagnosed in any pregnant woman who was not known to be at risk.

The proportion of pregnant women who were screened for HIV and syphilis has increased continually since the introduction of screening in 2010, EPI-NEWS 15/11, Figure 1. In a few blood banks, however, the screening is not yet fully implemented.

All of the four newly diagnosed HIV-positive immigrants had resided in Denmark for several years. These women should have been diagnosed upon arrival to Denmark, as this would have speeded up treatment and possibly improved their prognosis.

The National Danish Health and Medicines Authority recommends testing of immigrants from countries with a high HIV prevalence as soon as possible after their arrival to Denmark, EPI-NEWS 46/09.

According to the guidelines on pregnancy screening from the National Danish Health and Medicines Authority, EPI-NEWS 27-33/10, pregnant women who test positive for syphilis in the screening should undergo full serological testing to exclude false positives.

Nine pregnant women who tested positive for syphilis in the screening have not currently been re-tested. Some of thesemay have active syphilis.
(S. Cowan, A.H. Christiansen, B. Søborg, Department of Infectious Disease Epidemiology, S. Hoffmann, Microbiology and Infection Control)

In February 2013 Statens Serum Institut observed an increase in the number of notified hepatitis A cases.

The notified cases had no travel history previous to disease onset and most had no evident contact to each other. Cases did not belong to the traditional hepatitis A risk groups and were geographically spread across Denmark. Hypothesis generating interviews conducted in the beginning of March indicated that the source of infection was likely food-borne.

In March 2013, the SSI conducted a case-control study in which the patients' answers to a series of questions on which food items they had eaten were compared with the answers from a comparable group of healthy Danes.

The study indicated that the source of infection was frozen berries, which had been consumed, e.g. as smoothies or otherwise ingested without first undergoing heat treatment. Particularly frozen strawberries were suspected, but infection from other types of berry could not be excluded. This finding was made public on 14 March 2013.

As a response to the Danish findings, other Nordic countries (Finland, Norway and Sweden) also reported an increase in the number of hepatitis A cases. The hepatitis A genotype involved in the Danish outbreak has later been confirmed among cases in all the countries, which strongly suggests a common source of infection.

At present, it has not been possible to pin point a specific producer or the country of origin of the strawberries, but the issue is being investigated closely in a concerted effort by the four Nordic countries.

As a safety precaution, the Danish Veterinary and Food Administration recommends that all frozen berries be cooked for a minimum of one minute before being used in smoothies, for cake toppings or in desserts.

The total number of cases observed since 1 October 2012 is currently 56 cases in Denmark (Figure 3), and 90 cases have been recorded in all across the four Nordic countries. Denmark has thus recorded more cases than any other country. Among the 56 Danish cases, 34 are women and 22 men.

The youngest case is 4 years old and the oldest affected patient is 76 years old. The majority of cases have been observed in persons aged 10-29 years, Figure 4. The cases live across Denmark. 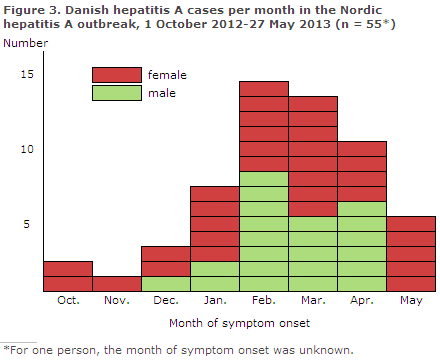 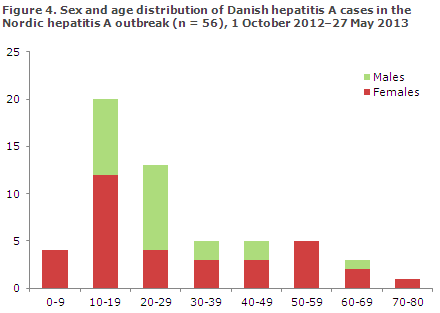 The Department of Infectious Disease Epidemiology at the SSI still receives notifications of hepatitis A cases with no recent travel history, which suggest the outbreak is still on-going. The prolonged outbreak is probably associated with the long shelf-life of frozen strawberries.

Physicians are encouraged to remain attentive and examine patients presenting with symptoms consistent with hepatitis A. Furthermore, the treating physician should contact the regional Medical Officers of Health without undue delay in order to obtain an opinion on the need for post-exposure vaccination of close contacts.

If possible, this should be done immediately after the patient has presented his or her complaint or as soon as the laboratory diagnose is avaliable.
(S.G. Lassen, B. Søborg, Dept. of Infectious Disease Epidemiology, on behalf of the Outbreak Group)

Further information on the outbreak

Coordination of the investigation lies in the hands of The Joint Outbreak Group counting representatives from Statens Serum Institut, Technical University of Denmark and the Danish Veterinary and Food Administration.

During the current outbreak, the Medical Officers of Health and the National Danish Health and Medicines Authority have also contributed.

In Denmark, Statens Serum Institut published the first news of the outbreak on 3 March 2013:

Disease Encyclopaedia, Hepatitis A (in Danish)

Theme on the hepatitis A outbreak (in Danish)

EuroSurveillance's description of the outbreak