The high numbers recorded in 2020 reflect that the whooping cough epidemic that started in the summer of 2019 remained at a high level through March 2020, EPI-NEWS 27-33/20. In contrast, the figure recorded for 2021 is historically low, probably reflecting a general effect of the transmission-reducing measures adopted in connection with COVID-19 and increased immunity in the population after the epidemic. Additionally, the introduced whooping cough vaccination offer targeting pregnant women has probably also contributed to reducing the occurrence, particularly in neonates below three months of age.

In non-epidemic periods, around 50-100 monthly whooping cough cases are typically detected in Denmark. During the previous epidemic in 2016,EPI-NEWS 14/17, the highest monthly number recorded was 284 cases. During the epidemic in 2019-2020, the highest recorded level was 874 detected cases in January 2020. Following the March 2020 lockdown, the level dropped abruptly - initially due to heavily reduced sampling activity for diagnostic analyses, but subsequently the sampling figures have increased again, whereas a corresponding increase in the number of cases detected has not been recorded. The average number of cases in 2021 was a mere 6.7 monthly cases, which is historically low. The monthly number of detected cases is presented in Figure 1. 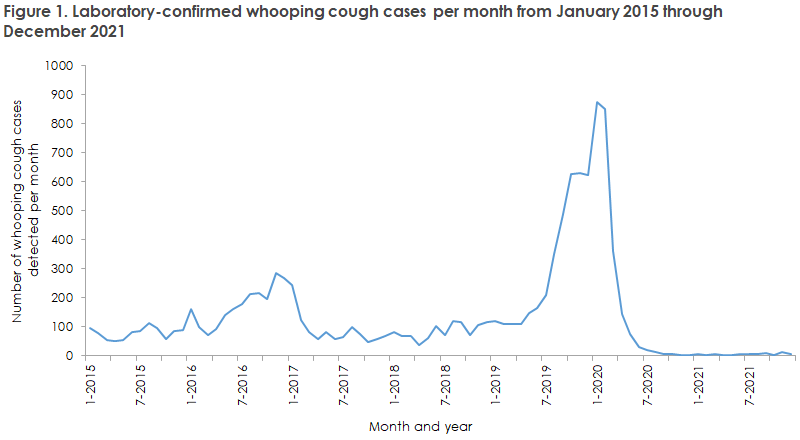 The age profile for whooping cough in 2020 and 2021 was very much in line with the age profile otherwise seen, Figure 2. Thus, whooping cough was detected in all age groups, but with a higher incidence among young, primarily unvaccinated infants and among older schoolchildren. Furthermore, an increased occurrence was seen among 38-49-year-olds, probably due to increased transmission and possibly also increased attention to the condition among parents to children with whooping cough. The low occurrence among 5-6-year-old children and the gradually increasing trend thereafter mirror the effect of booster vaccination at five years of age and the subsequent waning protective effect of the vaccines as the effect of whooping cough vaccine recedes in the course of 5-10 years. 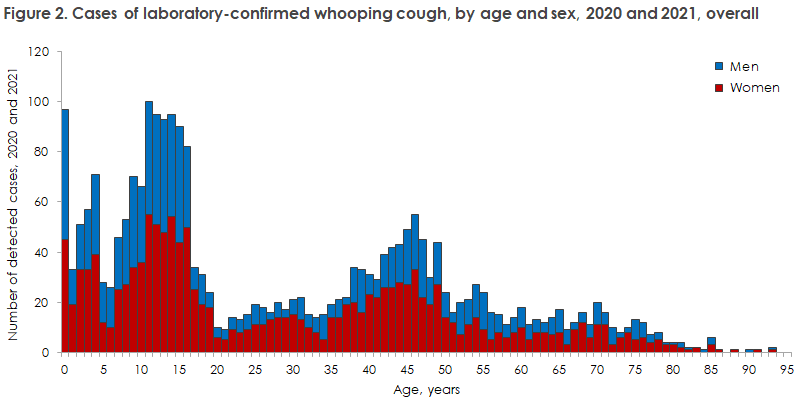 Whooping cough may give rise to serious disease courses in children below two years of age. Therefore, the infection is individually notifiable on Form 1515. Since October 2021, it has been possible to notify electronically using the Danish Health Data Authority’s Electronic Notification System (SEI2), EPI-NEWS 38/21.

A total of 122 cases were notified among children below two years of age in 2020 and 2021. 2020 (n = 117) and 2021 (n = 5) are presented jointly as the whooping cough occurrence was extraordinarily low throughout 2021. Compared with the latest Annual Report for 2019 (n = 299), a considerable decline has been observed in the occurrence of whooping cough among children below two years of age. This is probably owed to a combination of the measures implemented to prevent infection introduced in the community in mid-March 2020 due to the COVID-19 epidemic, and the fact that whooping cough occurred epidemically in 2019 and early 2020, why more cases were recorded in this period than is normally the case.

Among the 122 notified children below two years of age, 31 (26%) were unvaccinated, whereas 26 (21%) had received all three primary whooping cough vaccinations. Compared with the two preceding years, the share of unvaccinated children among all whooping cough cases had declined. The decline may possibly be explained by the introduction of free whooping cough vaccination for pregnant women in the autumn of 2019, whereby children below three months of age of recently vaccinated mothers have enhanced their antibody-based protection through their mother; see also below.

The share of children below two years with whooping cough that had received all three primary vaccines (21%) is in line with the 2019 level (19%) but higher than the 14% recorded in 2018. The explanation for this increase may be increased infectious pressure during the 2019 epidemic and in early 2020.

The largest share of admissions was recorded among the youngest children below six months of age. Among the 122 notified whooping cough cases below two years in 2020 and 2021, a total of 53 children (43%) were admitted to hospital for one or more days, Figure 3. Among children who had received none or only one vaccination, a total of 22 of 32 (69%) and 17 of 30 (57%) children were admitted to hospital. As presented, the unvaccinated and partially vaccinated children (one vaccine) have the highest risk of being admitted to hospital. Among children who have received two primary vaccines, seven out of 34 (21%) required admission, and among children who had received all three primary vaccines, seven of 26 (27%) required admission to hospital. Thus, considerable protection against admission is achieved already after two whooping cough vaccinations. It is therefore important to ensure that the vaccines are given as close as possible to the recommended time points at three and five months.

For 2020 and 2021, no deaths were recorded among the whooping cough notifications received

Due to the 2019 whooping cough epidemic, in the autumn of 2019 the Danish Minister of Health decided to introduce a temporary free offer of vaccination against whooping cough for pregnant women in their 2nd and 3rd trimester.

From 1 November 2019 to 23 December 2021, a total of 63,574 pregnant women accepted the offer. The vaccination coverage was particularly high in November 2019, but has since declined to a lower level, Figure 4. 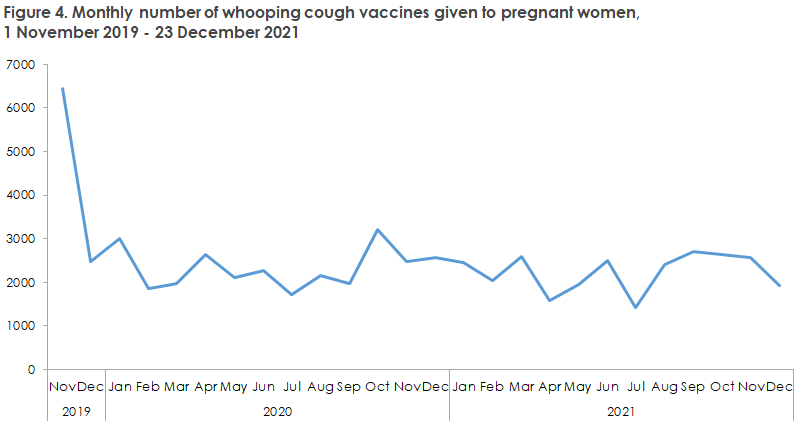 Even so, increases were observed in October of 2020 and 2021, probably owed to concurrent influenza vaccination of pregnant women and therefore an enhanced focus on whooping cough vaccination. Based on an assumption of 5,000 monthly pregnant women (corresponding to 60,000 annual births), the total coverage in the period has been slightly below 50%. This should be considered satisfactory as the whooping cough epidemic disappeared already in the spring of 2020 and the infection risk has therefore been more limited. Even so, Statens Serum Institut still recommends that all pregnant women receive vaccination under the temporary whooping cough programme. This recommendation applies to all new pregnancies.

Based on the share of whooping cough cases among children below three months of age among vaccinated and unvaccinated pregnant women in the period from 1 November 2019 to 31 December 2020, a significant vaccination effect of 71.7% was estimated for infants below three months of age, but with a wide confidence interval because of the relatively few whooping cough cases recorded in most of 2020.