This report comprises all cases of laboratory-confirmed whooping cough in Denmark in 2016, detected either by culture, PCR or serology at a department of clinical microbiology or at Statens Serum Institut (SSI). Data analysis is based on automatic registrations in the Danish Microbiology Database (MiBa).

A total of 2,086 cases of whooping cough were detected in 2016. The incidence was 36.6 per 105, which is markedly higher than in the previous years, Figure 1. Already in July of 2016, the SSI reported a heightened whooping cough incidence, EPI-NEWS 27/16; and following a continued and considerable increase in the autumn, a whooping cough epidemic was reported in November 2016, EPI-NEWS 46/16.

The number of cases and incidence per area in the 2014-2016 period are presented in Table 1. Data from previous years are available in the EPI-NEWS archive and under Numbers and Graphs for children below 2 years of age (in Danish).

The area with the highest whooping cough incidence in 2016 was North Zealand with nearly 70 cases per 105. However, compared with previous years, there was a clearly increased incidence in all parts of Denmark. A high incidence exceeding 47/105 was seen, particularly in the areas of Funen, Copenhagen subs., East Zealand and West Jutland. At the municipal level, within the North Zealand area, the municipality of Elsinore was particularly heavily affected with a total of 105 cases, corresponding to an incidence of 168 cases per 105. 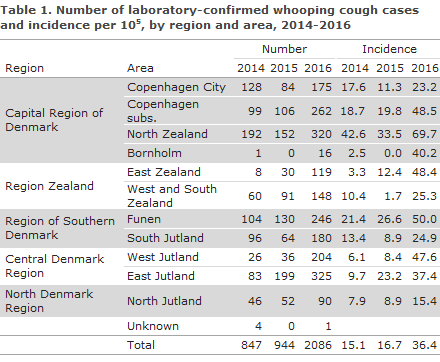 The incidence of whooping cough followed an even and increasing trend as from the spring of 2016; but after the newsletter on the epidemic was published in November of 2016, sampling for whooping cough diagnosis received more attention, and therefore more cases were also detected, Figure 1. On the basis of the latest data for January and February 2017, however, there is a clear downward trend for both the diagnostic activity and the number of detected cases. 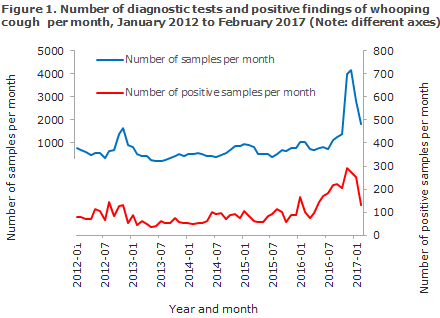 The distribution of positive whooping cough cases per region is presented in Figure 2. 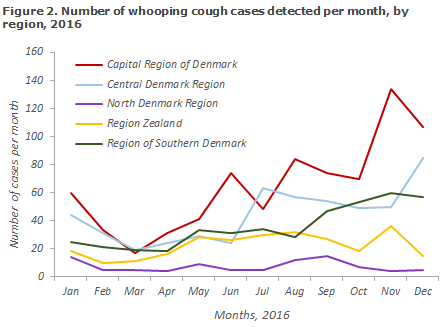 Distribution by age and age-specific whooping cough incidence is presented in Table 2. The highest incidence was recorded among infants below 1 year of age (see “Whooping cough in children below 2 years of age” below), among the 3-4-year-olds and generally among children up to 15 years of age. Among adults in their late thirties and early forties, a relatively high incidence was also observed. Among the 3-4-year-olds with whooping cough, 85% were registered as having been fully vaccinated. 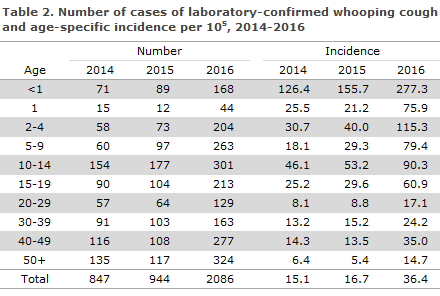 The number of cases observed in 2016 is presented by age and sex in Figure 3. 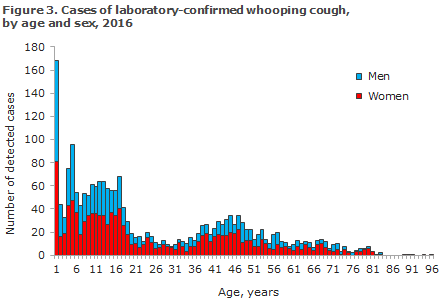 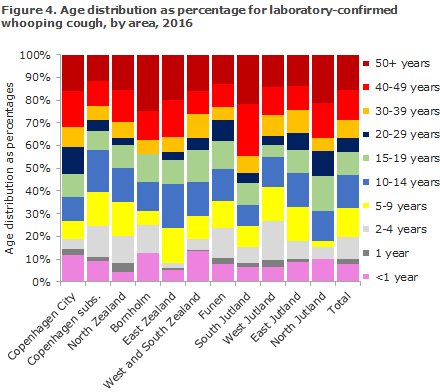 As in previous years, PCR was the most widely used method for detection of whooping cough (83.1%). Serology was used in 16.6% of the detected cases, and culture in 0.3%.

Serology should be used for diagnostics only in persons aged 8 years or older as antibodies from whooping cough vaccinations may interfere with the analysis for a few years after vaccination. Serology is particularly well-suited for diagnosis of adults, which is also reflected in the distribution showing diagnostic method by age, Figure 5. PCR and serology complement each other as PCR can be employed only in the initial 2-3 weeks of the disease course, whereas serology can be used only after a few weeks with symptoms. 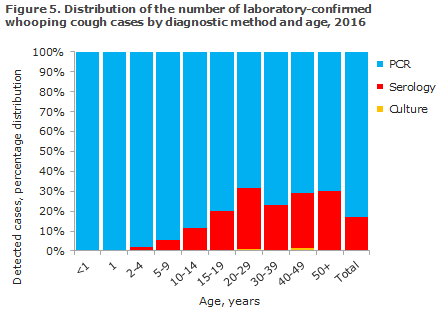 Furthermore, the effect of whooping cough vaccines starts to decrease already some years after vaccination. This is underlined by the fact that a very high share of the 3-4-year-olds was registered as having been fully vaccinated. Although the vaccine does not protect against clinical disease, fully vaccinated children will typically run a milder disease course.

The vaccination programme mainly aims to directly and indirectly protect infants against whooping cough, whereas whooping cough in older children and adults is normally not a serious condition (even though it can be extremely bothersome).

As in previous years, the highest incidence was observed among children below the age of 1 year. Children in this age group are particularly exposed to serious and occasionally life-threatening whooping cough infection; partly because they are young, and partly because they have not yet been fully vaccinated as they have received no more than a maximum of two of the three DTaP-IPV/Hib vaccines recommended for infants at 3, 5 and 12 months of age (see “Whooping cough in children below 2 years of age).

The 2016 whooping cough epidemic affected the various parts of Denmark differently, but all areas experienced a marked increase in the number of whooping cough cases compared with the preceding years. Now, in early 2017, the incidence is once again decreasing and it seems that the epidemic has peaked.

Among the 207 notified children below 2 years of age, 102 (49%) were unvaccinated, whereas 23 (11%) had received all three whooping cough vaccinations (DiTeKiPol/Hib® or Infanrix Hexa®). 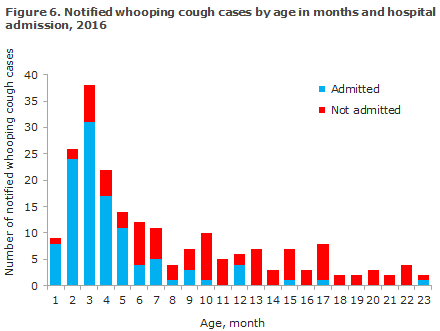 Among the 207 cases notified, a total of 112 (54%) children were admitted for one or more days, Figure 7. Among infants below 5 months of age who had received a maximum of one vaccination, 91 of 109 (83%) were admitted. As shown, the young unvaccinated or partly vaccinated children are more affected by the condition and require admission to hospital. 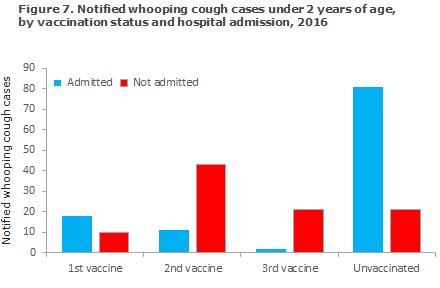 Based on the notifications, no deaths due to whooping cough were recorded in this age group in 2016.

The main prophylactic measure for whooping cough is vaccination, and it is particularly important that infants do not unnecessarily delay their vaccinations under the childhood vaccination programme and that the recommended vaccination times at 3, 5 and 12 months are observed to the extent possible. A mild cold and fever up to 38 degrees Celsius do not constitute contraindication for vaccination.

Furthermore, under the childhood vaccination programme, a DTaP-IPV booster is recommended at 5 years of age. The rationale of the 5-year whooping cough booster is to prolong protection in the vaccinated children to reduce the risk of transmitting the condition to younger children. Older children who have only received primary vaccination have a greater risk of getting whooping cough at a later stage and also constitute an infection reservoir for younger, unprotected children, e.g. new siblings below 1 year of age who are not yet fully vaccinated.

Fully or partly unprotected children below 24 months of age who are exposed to whooping cough infection should be offered prophylactic treatment with antibiotics in accordance with the guidelines provided in EPI-NEWS 16/16. Furthermore, it has been shown that the risk of developing pneumonia and the risk of admission and death among unprotected children who are exposed to infection may be reduced by vaccinating the child against whooping cough concurrently with the administration of PEP. The primary vaccines DiTeKiPol/Act-Hib® and DiTeKiPolHepB/Hib may both be given from 2 months of age.

Furthermore, it is important that the older siblings of infants are vaccinated as recommended. In pregnant women in whom whooping cough is detected shortly before giving birth, i.e. less than 3 weeks before term, treatment is initiated immediately.

It is well-known that whooping cough occurs cyclically in unvaccinated and sufficiently vaccinated populations alike with peaks every 3-5 years. In 2016, nearly twice as many children were notified with whooping cough (207) as in 2015 (113). This increase is in line with the increase observed for all cases, but whereas the incidence among the 0-year-olds doubled, it increased 5-fold among 1-year-olds, see “Whooping cough 2016” above. Nevertheless, slightly more than half of the 1-year-olds (23/43) were not fully vaccinated, and six were fully unvaccinated. Seemingly, the epidemic has now receded as the months of February and March 2017 have brought a notably lower number of whooping cough cases than previous months among children below 2 years of age.

As described above, the young unvaccinated or partly vaccinated children are affected more severely by the condition and face the ensuing risk of being admitted to hospital and the risk of sequelae.

Physicians are encouraged to remain extra attentive to the diagnosis, particularly among unvaccinated infants, but also in fully or partly vaccinated young children, and to ensure sampling and PEP, if relevant, to reduce the risk of serious episodes of whooping coughinfection.

Through a working group in The Vaccination Committee, the Danish Health Authority is currently assessing if the prevention of whooping cough among infants may be improved.
(L.K. Knudsen, P.H. Andersen, Department of Infectious Epidemiology and Prevention)

Easter vacation
Unless special circumstances arise, EPI-NEWS will not be published in weeks 15 and 16. We wish all readers of EPI-NEWS a happy Easter.
(Department of Infectious Epidemiology and Prevention)