In 2019, a whooping cough epidemic affected Denmark and the epidemic continued until the spring of 2020.

For a detailed epidemiological description of the 2019 occurrence, please see the 2019 annual report on laboratory-confirmed whooping cough.

The highest incidence observed during the 2019-2020 epidemic was recorded in January 2020 when 874 cases were detected, Figure 1. 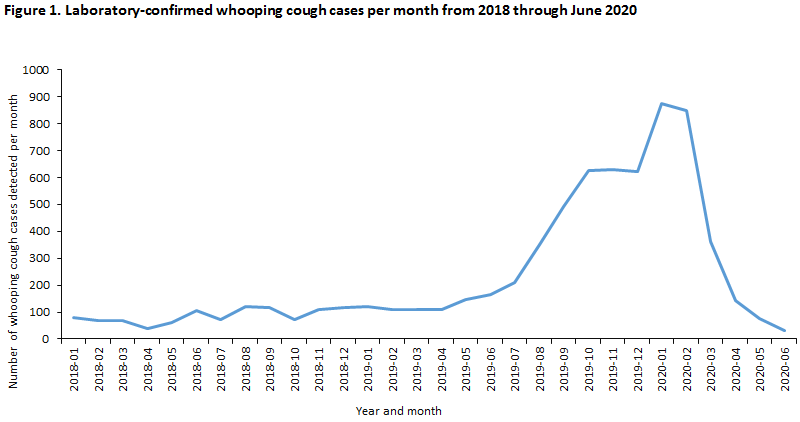 The age profile for whooping cough in 2019 during the epidemic was very much in line with the age profile otherwise seen, Figure 2. Thus, whooping cough was detected in all age groups, but with a higher incidence among young, unvaccinated infants and among older schoolchildren. Furthermore, an increased occurrence was seen among 35-55-year-olds, probably due to increased transmission and increased attention to the condition among parents to children with whooping cough.

2019 saw a total of 299 notified cases of children under 2 years with whooping cough.

For a detailed epidemiological description of the 2019 occurrence, please see the annual report on whooping cough in children below the age of two years .

Among the 299 notified children below 2 years of age, 116 (39%) were unvaccinated, whereas 57 (19%) had received all three primary whooping cough vaccinations. Eight of the notifications among unvaccinated children stated that the lacking childhood vaccination was due to conscious opt-out.

No whooping cough-related deaths were recorded among children below 2 years of age in 2019.

From 1 November 2019 to 22 June 2020, a total of 24,279 pregnant women have accepted the offer. At 60,000 annual births, approx. 5,000 will need vaccination every month, provided the coverage is 100%. Based on this number of births, the coverage in the initial six months has been 76%, though it has followed a decreasing trend as the period has passed. Data on the effect of the vaccination to avoid whooping cough among infants below three months of age will be presented at a later date.