In EPI-NEWS 28-33/19, the SSI brought attention to an increased incidence of whooping cough in several Danish areas, recording a total of 210 cases in the month of July alone. This increase has continued into the month of August, reaching a total of 351 persons diagnosed with whooping cough, Figure 1. This figure is more than three times higher than the one normally observed, and as the increase now includes nearly all Danish areas, Figure 2, we consider that an epidemic is underway.

At the end of August, a total of 1,323 whooping cough cases had been detected this year, which exceeds the numbers recorded for all of 2017 and 2018, respectively. The heavily increased incidence covers nearly all age groups. Among children below two years of age, a total of 138 cases have been notified. This number also exceeds the full annual number recorded in each of the two preceding years.

Whooping cough can be serious in small children, and we therefore recommend that doctors be especially attentive to any whooping cough among patient with spells of dry cough, particularly among young children, but also among older children and adults who may pass on the infection to young, unprotected children.

The whooping cough incidence was heightened in the spring months on Funen and in South Jutland; and in the month of July, a substantial increase was recorded in several other Danish areas.

After including the data for August, it is now clear that the increase has continued in 9 of the 11 Danish country areas, Figure 2. Part of the increase from July to August may be explained by increased attentiveness to the condition and therefore an increased analysis activity following the publication of the 33/19 issue of EPI-NEWS. However, as the increase has been substantial as well as widespread, this in isolation cannot explain the increased number of detected cases. We assess that an epidemic is currently evolving, and that it may be expected to continue its course for months to come, also because whooping cough is normally more frequent in the second half of the year. 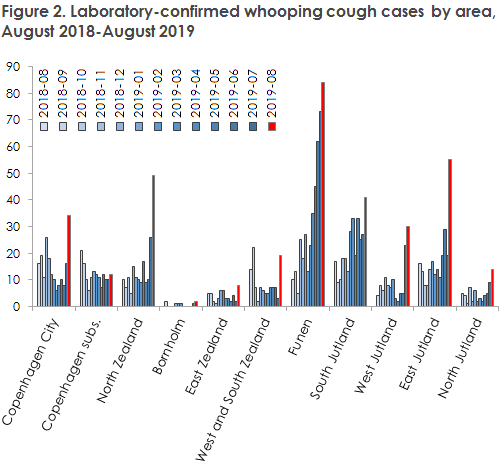 Whooping cough is a bacterial infection caused by Bordetella pertussis that occurs in small children and adults alike, Figure 3. 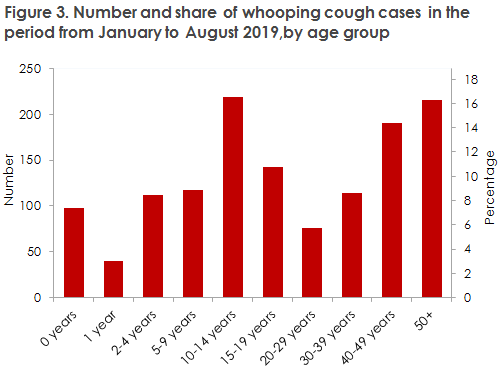 Neither vaccination nor previous whooping cough yield life-long protection against new infection, and whooping cough is extremely infectious during the first 3-4 weeks of the up to three-month course the disease typically runs. It is of particular importance to avoid infecting unvaccinated infants, as whooping cough may run a serious course in this group of patients. Antibiotic therapy is primarily used to prevent transmission but cannot be expected to alleviate symptoms.

Prophylactic treatment with antibiotics following exposure (PEP) is relevant primarily for unvaccinated children below two years of age (and for children below six months regardless of vaccination status), but may, in special cases, also be a relevant option in adults, e.g. in case of whooping cough in a family; for more information, see the SSI website. EPI-NEWS 28-33/19 also describes the symptoms and prophylactic measures in more detail, and further information is available in the SSI’s Disease Encyclopaedia at the SSI website.

The primary preventive measure is vaccination, and it is important to ensure that the recommended vaccination times are observed whenever possible, particularly at three and five months of age. Whooping cough vaccination is not recommended as stand-alone treatment following exposure to infection (PEP), but if the child has reached the age at which vaccination is warranted, vaccination should be given along with relevant prophylactic antibiotic therapy.

A vaccine is available that may be used to vaccinate adults against whooping cough (the DiTekiBooster). This vaccine may be used regardless of any previous primary vaccination of the patient.

Booster vaccination may be considered in persons who come into close contact with infants, e.g. healthcare workers.

The booster vaccination may also be considered for pregnant women (optimally in their late second or early third trimester). According to the current summary of product characteristics, sufficient data are not available to recommend the use of the diTekiBooster in pregnant women, as the vaccine has not been tested in this group of patients. As is the case for other inactivated vaccines, the diTekiBooster is not expected to harm the foetus. In the countries where pregnant women have been vaccinated, follow-up studies have demonstrated no increased risk for the pregnant woman or her foetus. The cost of any vaccination of adults will be defrayed by the patient.

The report on laboratory-detected chlamydia infections (oculogenital infection caused by Chlamydia trachomatis) is based on data from the Danish Microbiology Database (the MiBa) and comprises all positive and negative results of chlamydia tests.

For a detailed epidemiological description of the 2018 incidence including tables and figures, please see the annual chlamydia report.

More than twice as many women as men were tested for chlamydia; and in nearly all age groups, the share of positive samples was substantially higher among men than among women. The male share of the total number of cases detected has remained practically unchanged at only 41%. This skewed gender distribution of the tested population is unfortunate, and increased sampling among men is therefore desirable.

Generally, there are grounds for enhanced preventive action, especially among 15-29-year-olds, particularly among men. There is a need for growing attention to information about safe sexual behaviour, increased sampling activity and partner tracing in case of positive findings.

For treatment of uncomplicated chlamydia, the Danish Health Authority recommends azithromycin 1g administered orally as a single dose, or doxycycline 100 mg x 2 administered orally for seven days. These two drugs are equally effective in the treatment of uncomplicated chlamydia, and resistance to the drugs is considered to be rare. Doxycycline in the same dose is superior in uncomplicated rectal infections, and as a relatively high share of women with chlamydia is also asymptomatically positive in the rectum, there is a risk of relapse if rectal infection goes untreated. Higher doses are used in the treatment of LGV.

A mutated variant of C. trachomatis

In April 2019, reports from Finland stated that researchers had discovered a variant of C. trachomatis which, due to a mutation, went undetected by a very widespread diagnostic method (Aptima Combo 2® Assay; Hologic Inc., USA) (AC2). Researchers had discovered this because a couple in whom both had symptoms tested positive and negative, respectively, using AC2 and another diagnostic method. AC2 is also used in Denmark, and the departments of clinical microbiology have been informed via a safety alert from the manufacturer. In June 2019, the ECDC issued a risk assessment concerning false negative tests associated with AC2.

In case of ambiguous findings when using AC2, it is recommended to repeat the analysis using another method not affected by the above-mentioned mutation, e.g. Aptima CT® Assay (Hologic Inc., USA).

The SSI has requested that departments of clinical microbiology using AC2 submit material from samples that have yielded ambiguous findings where AC2 was used. In the context of the EU, these samples will be tested for the mutation in question at a Swedish reference laboratory.