In the spring and summer of 2019, a high incidence of whooping cough has been observed in several parts of Denmark, and the level is currently higher than the one recorded at the beginning of the 2016 epidemic. This may mean that a new epidemic is upcoming, and doctors should currently be extra attentive to the diagnosis in children and adults alike.

The whooping cough occurrence was already slightly increased in the first months of the year with just over 100 laboratory-confirmed cases per month compared with approx. 70 cases/month normally. In contrast, the number of cases observed in May, June and July was substantially increased with 147, 165 and 209 cases, Figure 1. 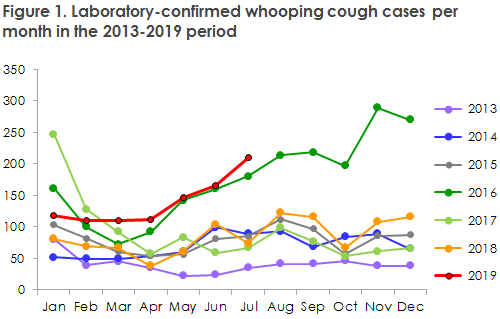 The increased occurrence of whooping cough was observed mainly on Funen, and, to a lesser degree, in South Jutland; and in both of these areas, the occurrence started increasing in spring. In July, we have now also recorded an increased number of cases in the areas Copenhagen City, North Zealand and West Jutland. The incidence per month for each area is presented in Figure 2.

The age distribution among the detected whooping cough cases is as normal, and thus the majority of cases are seen in young children below five years of age and among 10-15-year-olds, Figure 3. 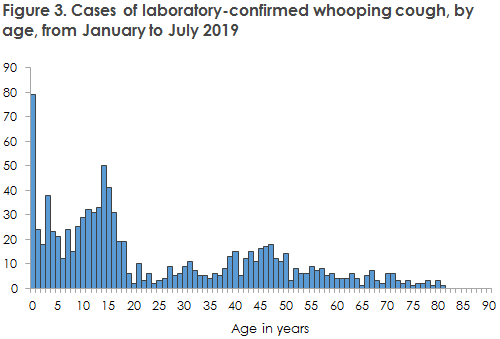 Among young children below 1 year of age, 53% were unvaccinated, 15% had received one of the three vaccines given as part of the infant vaccination programme, and 32% had received two of the vaccines. The third vaccine is given at 12 months of age, and it is only with the third vaccine that the best possible protection until the 5-year vaccination may be expected. Whooping cough vaccination does not yield life-long protection, and the effect gradually recedes in the course of an estimated 5-10-year period. Even so, studies have demonstrated that among children below two years of age, vaccination provides very good protection against whooping cough that requires hospital admission, which is frequent, particularly among infants.

The classic course of whooping cough is characterised by sudden, severe spells of coughing that cause difficulty breathing, vomiting after the coughing spell and a wailing (whooping) sound when the person once again manages to breathe in. This classic course is mainly seen in young children. In infants, cases of apnoea and cyanosis may occur. In larger children and adults, whooping cough may present as a prolonged disease course with coughing spells where the whooping sound and vomiting may not be observed. In all age groups, the condition may last for up to three months, and it is extremely contagious in the beginning of its course. For more information and recommendations about choice of diagnostic modality, please see the disease encyclopaedia at the SSI website.

First-choice prevention against whooping cough is vaccination, and it is particularly important that the two initial vaccines are given timely, when the child turns 3 and 5 months old, respectively. Data for the 2007-2017 period have demonstrated that only 15% of infants receive the initial vaccination in the week that they turn 3 months old, whereas 40% are vaccinated one week later, approx. 20% two weeks later and approx. 10% are only vaccinated once they have turned 4 months old, thereby recording a minimum delay of one month.

Children born after 1 August 2019 will be comprised by the new reminder scheme, EPI-NEWS 26/19, and the parents of these children will be reminded of their child’s vaccination in a letter sent to their e-Boks 14 days before the recommended vaccination time.

It is recommended that children below 2 years of age who have been exposed to infection and who have not yet received the two initial infant vaccines receive preventive antibiotics treatment, regardless of any symptoms they may have. The child should be throat swabbed (nasopharynx) before treatment is initiated. If whooping cough is present in the child’s household, all household members should receive preventive treatment. In whooping cough, antibiotics treatment aims primarily to prevent any further infection, as it will only rarely have an effect on the disease course.

Healthcare workers may be at risk of becoming infected with whooping and also risk passing on the infection to other children, e.g. health visitors who have contact with neonates. No national Danish guidelines exist on vaccination of adults, but if adults wish to boost their immunity against whooping cough, e.g. the diTekiPol Booster, Tetravac or diTeki Booster may be used.