Tetanus (lockjaw) is caused by the Clostridium tetani bacterium. The bacterium is found in dirt and in the intestinal systems of some animals. If the skin has become damaged (e.g. a wound or similar), the bacterium may enter the body and release its toxin.

Tetanus is a rare condition in Denmark with 0-2 annual notified cases having been recorded in the past many years EPI-NEWS 11-17/21. This is owed to a very high population immunity achieved via the long-standing free childhood vaccination programme, which includes three primary tetanus-containing vaccinations in the first year of life and a booster vaccination at five years of age.

In case of acute wound injury, tetanus immunity must always be assessed, see the website of Statens Serum Institut (in Danish). The SSI has prepared flow charts for use when assessing the vaccination need in case of acute wound injury, including the need for any TIG treatment (TIG was previously termed Tetanus Anti-Toxin/TAT). The anti-toxin currently carried by the SSI is called

TIG may be indicated in case of lacking or incomplete previous tetanus vaccination, depending on the time passed since the most recent vaccination and on the character/size of the wound, including cases with considerable blood loss, see Table 1. 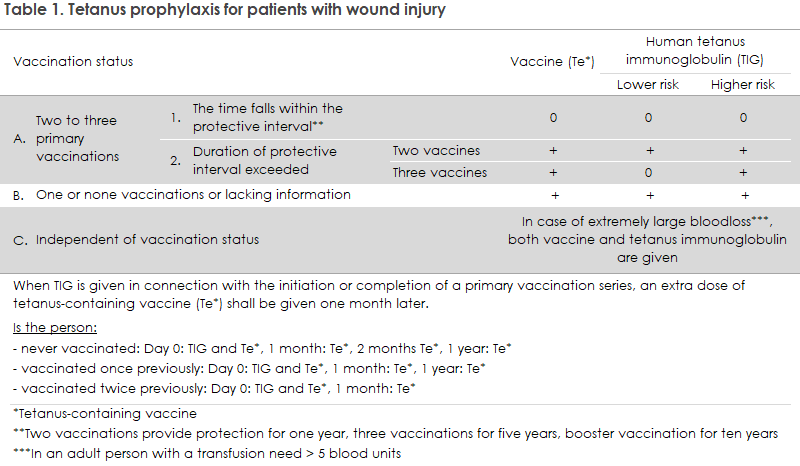 Insect stings/bites alone do not constitute a tetanus risk. However, you need to be attentive to the risk of secondary bacterial contamination whenever the protective skin barrier has been compromised.

The risk is particularly high in connection with:

TIG should therefore be stored at all accident and emergency departments/acute treatment clinics and possibly also in general practices with a long driving distance to the closest emergency department. The shelf life of TIG is approximately two years, and it is a preparedness product that may be ordered free of charge from the SSI for post-exposure treatment.

TIG is an immunoglobulin and therefore should not be registered in the Danish Vaccination Register (DVR). Therefore, the SSI does not have good data on the real use of the product. TIG is a preparedness product, why some waste may be expected due to expiry during storage, either centrally or locally. Based on the number of doses issued in the past five years, a declining trend has been observed in the consumption, and some regional differences have been recorded in the ordering pattern, Table 2. Even so, it is hard to assess if this trend reflects a real difference in the use of TIC.

At EU level, tetanus is also a rare condition. In the latest annual report on tetanus from the ECDC covering 2018, it appears that 26 EU/EEA countries reported a total of 92 cases (compared with 82 in 2017). Italy reported nearly 40% of all cases, whereas Poland, Rumania, Spain and Great Britain nearly accounted for an additional 30%. Persons aged 65 years or more comprised 75% of all cases, whereas only two cases were reported in persons below 25 years of age. More than two thirds of all cases were females. Among persons aged 65 years or more, this share was nearly 80%.

Historically, this gender difference has been attributed to the fact that more men than women have been offered (booster) vaccination when serving in national armed forces. A short report on the Danish tetanus cases in the period from 1994 to 2016 is available in EPI-NEWS 47/16. Here, the median age was 70.5 years, and the youngest case was 29 years old.

In the period from 2017 to 2021, a total of six tetanus cases were notified. Two cases occurring in 2017 were previously described in EPI-NEWS 47/17. 2018 also recorded two notified cases; both were women in their eighties. One of the women was previously unvaccinated, whereas the other had reportedly received a single dT booster more than ten years before her infection. In 2020, a single case was notified: a man in his thirties who developed tetanus symptoms (muscle spasms) three days after burning his hand. Following re-assessment of the disease course and in consultation with the clinician, it was decided to cancel the notification, primarily because a blood sample taken on admission had revealed a protective level of tetanus antibodies. This year, one case of tetanus was notified; a woman in her sixties who died two days after being admitted with signs of septic shock. For a prolonged period of time, the patient had had a patellar wound following osteosynthesis due to a tibial fracture. TIG treatment was attempted applying treatment doses. The patient had not previously received tetanus vaccination.

Tetanus can originate from very small wounds, and it is important that all Danish citizens be protected against this life-threatening infection. It is particularly important to ensure that persons born before 1950, when tetanus vaccination was introduced into the childhood vaccination programme, undergo tetanus risk assessment. The SSI assesses that it remains important to consider the indication for TIG when assessing a specific wound injury and vaccination history. This is in line with recommendations from, e.g., the British (PHE) and American (CDC) health authorities. Previously given tetanus-containing vaccines may have been recorded in the DVR, which may be used in the assessment of the TIG treatment indication. The healthcare worker responsible for the treatment has an obligation to record tetanus vaccination, even if the vaccination is given as part of wound injury treatment.