Statens Serum Institut (SSI) received 18 notifications in 2015 and 37 in 2016 of persons who had become infected with hepatitis A virus (HAV). Figure 1 presents the development in the number of notified HAV cases by infection in Denmark and abroad in the 2007-2016 period. Compared with the preceding years, the number of cases observed in 2015 and 2016 were low. The many cases recorded in 2013 were due to a major outbreak caused by frozen strawberries, EPI-NEWS 48/13 and 48/14.

Notified HAV cases by origin and place of infection are presented in Table 1. A total of 27 persons had become infected in Denmark (49%). The majority of these (74%) were of Danish origin. A total of 28 persons had become infected abroad. Eleven persons of Danish origin were reported to have become infected abroad in the following countries: Cyprus, Indonesia, Malta, Poland, Senegal, Spain (2), Egypt, India; and in two cases, more than one country had been reported. Five second-generation immigrants were infected abroad in connection with family visits in the following countries: Ethiopia (2), Lebanon, Somalia and Pakistan.

Twelve persons born abroad had acquired HAV abroad. Seven of these persons were infected before their arrival to Denmark – five were refugees, from Syria (4) and The Democratic Republic of Congo; and two were workers from Romania. Additionally, four persons who were born abroad became infected while visiting family in Romania (2), Turkey and Bulgaria, and one while travelling as a tourist in the Philippines.

No food-borne HAV outbreaks were recorded in Denmark in 2015 or 2016. Four clusters with presumed person-to-person transmission counting 2-4 persons were recorded. 2015 saw the first ever recorded Danish case of infection via a blood product. The infection was documented by means of sequencing, and additional products from the donor were discarded. Since 2016, a large HAV outbreak has been reported in Europe among men who have sex with men (MSM). At present, more than 1,000 HAV cases have been reported in a total of 15 European countries, see EPI-NEWS 10/17 and rapid risk assessment from ECDC. Molecular biological HAV typing has shown that three variants of the IA genotype are in play. In Denmark, one HAV case from 2016 and eight from 2017 have been linked to the MSM outbreak in Europe by typing. An additional three HAV cases in MSM from 2016 may form part of this outbreak, but sub-typing of the patient samples was not possible. 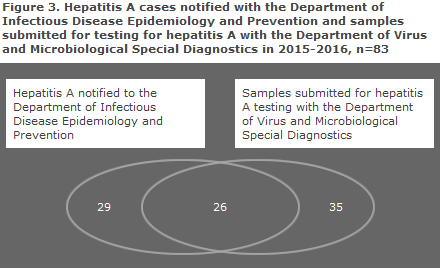 In 2015 and 2016, the laboratory of the Department for Virus and Microbiological Special Diagnostics received a total of 61 samples from patients with a presumed HAV infection. Among these, 26 had also been reported to the Department of Infectious Disease Epidemiology and Prevention, Figure 3. HAV-RNA was detected in 28 samples in 27 of which virus could be sub-typed. Thirteen cases were caused by type 1A (10 of which occurred in 2016), seven were of type 1B and seven were of type 3A. A total of 23 cases could be subjected to sequence analysis by phylogeny, Figure 4, and this analysis reveals the clusters described above. The Danish-acquired HAV cases were primarily of type 1A, while HAV acquired during travels to other countries was primarily of type 1B.

The number of hepatitis A cases in Denmark in the 2015-2016-period was low and the cases were mainly sporadic, with about half of the cases having become infected abroad. Only a limited number of HAV infection cases were reported among refugees.

In 2016, virus typing and sequencing showed that a limited number of HAV cases were linked to a major European outbreak among men who have sex with men (MSM) in 2016-17. The comprehensive spreading of the same virus types internationally may be explained by an active European cross national sexual network among MSM. The outbreak underlines the risk of sexual infection with hepatitis A and the continued need to ensure accessible knowledge and information for risk groups about effective protection through vaccination.

Several European countries are currently experiencing a shortage of monovaccines for protection against hepatitis A, in particular for children as well as for adults. See EPI-NEWS 42-43/17 for professional guidance to doctors about how the available hepatitis A-containing vaccines may be used most appropriately.

Even though the occurrence of hepatitis A is low in Denmark, it is important to follow the development with a view to identifying outbreaks, including any food-borne infection. It is also important to monitor any imported cases in view of the recommendations about hepatitis A vaccination before stays in the countries in question. Virus typing of HAV-IgM-positive samples is an important part of outbreak tracing and linking to other countries. We therefore take this opportunity to encourage Danish laboratories to continue submitting all HAV-IgM-positive samples for virus typing. PCR for HAV and any subsequent sequencing is provided free of charge at Statens Serum Institut.

In the summer of 2017, two cases of tetanus were notified at a short interval. Both patients were elderly women with an uncertain tetanus vaccination status. Below is a brief outline of the cases.

Case 1.
A 74-year-old Danish woman was hospitalised with trismus (lock-jaw). Eight days earlier, the patient had fallen in her garden. The fall had caused superficial wounds on the extremities and a haematoma of her face. The initial wound care included no tetanus vaccination.

Initially, trismus was believed to have been caused by the trauma. The patient was therefore treated with penicillin and received a tetanus booster. The jaw problems increased despite the treatment. On the third day of her admission, she presented with stiffness of the neck, hyperreflexibility, dysphagia and transitory convulsions of the muscles of the neck. Hours later, sudden opisthotonus and circulatory collapse occurred due to cardiogenic shock. The patient was transferred to an intensive care unit for artificial respiratory support and other supportive treatment.

The patient was receiving treatment with a janus kinase (JAK) 1-2 inhibitor due to severe myelofibrosis, and she had received her most recent tetanus vaccination more than 15 years earlier. JAK inhibitors may have an immuno-compromising effect, and the treatment was therefore discontinued. After two months of admission, the patient was transferred for rehabilitation; and after a total of three months, she was discharged for further outpatient rehabilitation in her home.

The patient’s previous vaccination history was uncertain, and the delayed tetanus vaccination and the immuno-compromising treatment may have contributed to the insufficient antibody response of the tetanus booster vaccination administered.

Case 2.
An 89-year-old woman had a wound on her shinbone cleaned and sutured. She had acquired the wound during gardening work. In connection with her treatment, she received a single dose of injected penicillin 5 MIE along with a diphtheria-tetanus booster. Due to poor wound healing with skin necrosis, the wound underwent surgical revision a week later and once more during the following week. Due to the clinical picture and a positive culture from the wound, the patient was treated with injection Piperazillin/tazobactam. Four days after the revision, when her leukocyte count and CRP were decreasing, she described pain when opening her mouth. A CT scan of her mandible showed degenerative changes with no signs of fracture or dislocation. Antibiotics treatment was discontinued 10 days after being initiated. During the disease course, she had difficulty opening her mouth and complained about increasing muscle pain from both thighs.

Myositis - which the patient had been treated for years earlier - was suspected, but rejected owing to a normal CPR value.

Three weeks after the initial visit to the emergency room, the patient was still admitted and now developed generalised pain and stiffness of the muscles of the back, constant convulsions of both legs and trismus. On suspicion of tetanus, she was treated with anti-tetanus immunoglobulin (Tetagam®P). This treatment was repeated a day later. Subsequently, a rapid clinical improvement was observed, and the patient was discharged approx. 2 weeks later for rehabilitation. The patient was in a good state of health at an outpatient check-up one month later.

The patient's initial tetanus vaccination status remains unknown. The protracted course may possibly be due to the administration of a diTe booster vaccine at the time of the injury and the repeated surgical revision.

Tetanus is a rare infection in Denmark. In the 1994-2016 period, a total of 29 cases were reported, i.e. an average of slightly more than one annual case, spread: 0-4 annual cases. A total of five patients died. Among the 29 notified cases, 16 were women and 13 were men.

The median age for women was 70.5 years, spread 63-86, and for men the median age was 71 years, spread 29-87 years. A total of three patients have received one tetanus vaccine, one had received two, none had received three or more, whereas 13 were unvaccinated according the notifications. For nine patients, there was no information about vaccination status. A clear seasonal variation was observed as 17 of the 29 cases were notified in the months of July, August and September (and another eight cases in the months from March to June). This may probably be explained by the fact that the risk of exposure to soil bacteria is much lower in the winter season.

Tetanus can develop from very small wounds, and it is important that all Danish citizens be protected against this life-threatening infection, EPI-NEWS 5b/2015. It is particularly important to ensure that assessment for tetanus risk includes persons born before 1950 when tetanus vaccination was introduced into the childhood vaccination programme; and that anti-tetanus immunoglobulin treatment is given already at the initial contact, if this is recommended according to current guidelines, EPI-NEWS 25/17.