Status on the coverage of the HPV vaccination programme

As from 1 February 2016, a new HPV vaccine, Cervarix®, was introduced as a two-dose programme, following a statutory vaccine tender. Girls who have already received a minimum of one Gardasil® will conclude vaccination with this vaccine until the end of December 2017, or as long as the vaccine is on stock. Gardasil® can be ordered by phone by contacting the Order Office, EPI-NEWS 49/16. 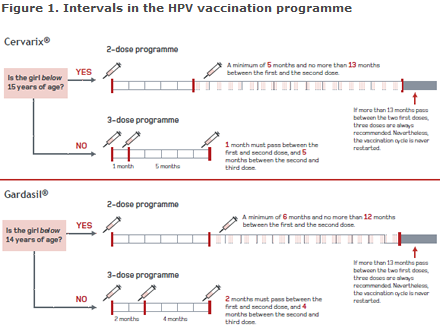 Link to pdf-version of figure 1

This issue of EPI-NEWS summarises and assesses the coverage of the HPV vaccination programme, and also accounts for the adjustment of the calculation of the share that is stated as having concluded vaccination with HPV vaccine.

In October 2016, the calculation method used to establish the HPV vaccination coverage was changed as it needed to take into account that girls may be fully protected after either a two-dose or a three-dose programme. Additionally, the statutory registration of vaccinations directly in the Danish Vaccination Register (DVR), which came into force on 15 November 2015, made it more expedient to calculate the vaccination coverage based on the number of vaccinations registered in the DVR, and not only on the basis of the service code that the SSI receives with several months’ delay.

Nevertheless, it has been shown that a relatively large number of the girls who had received two doses of HPV vaccine were not recorded as having concluded their HPV vaccination. This is due, among other things, to the fact that the calculation model that was used to establish the interval between HPV vaccinations was imprecise.

The calculation model for “HPV vaccination concluded” has now been changed so that the time between the two doses is determined in days. Furthermore, many girls have received two HPV vaccinations at excessively short intervals or at the incorrect age; or two different HPV vaccines have been used; Table 1. Thus, for birth cohort 2002, only 57% received the two vaccinations correctly. Vaccinations are given at incorrect (either too short or too long) intervals in a third of those vaccinated; but in 4 out of 10 of these cases, the vaccination was given within 4 days of the recommended interval. 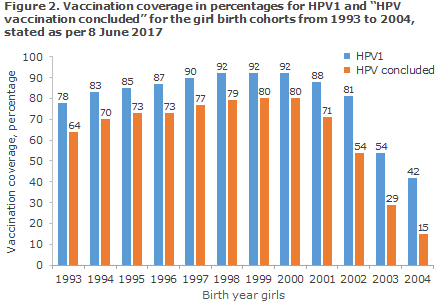 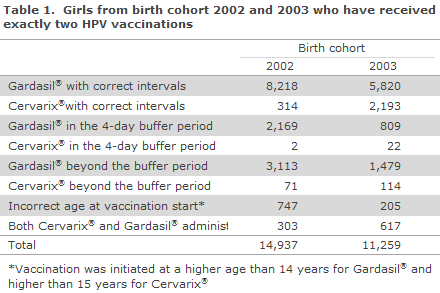 To take into account the above-mentioned issue, the calculation model for “HPV vaccination concluded” has been adjusted to allow the minimum and maximum interval between two doses to deviate by up to four days from the recommended date (buffer), which is acknowledged internationally. The consequences of the changes in the calculation model used to determine the share of concluded vaccinations for birth cohort 2003 are presented in Figure 3. 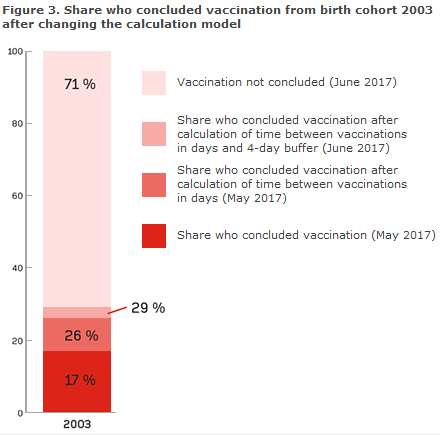 A positive trend has been observed in the vaccination activity during the past three months. Thus, in March, April and May, approx. 4,200 vaccines have been administered a month, compared with 2,200 monthly vaccines in the corresponding months of 2016. Thus, the vaccination coverage for HPV1 for birth cohorts 2003 and 2004 has increased, corresponding to approx. 3-4 percentage points since the previous report, and an increasing share of the girls conclude their vaccination.

In the latest report published on the SSI’s website (from 3 May 2017), the corresponding shares were 38% and 18% (17% in a statement from 28 April). Thus an increase of 16 and 11 percentage points has been observed for the 2002 and 2003 birth cohorts, respectively. This increase is owed to a combination of increased interest in the vaccination programme and to the introduction of the changed calculation method.

A relatively high share of girls from birth cohort 2002-3 has received two doses of Gardasil®, but not within the recommended interval. According to international guidelines, e.g. from US Centers for Disease Control, a deviation of up to four days from the minimum interval for which the vaccine was approved is acceptable, and this has therefore been added to the revised calculation model.

The share of girls who concluded vaccination increased in birth cohorts 2002-2004, but remains substantially below the nearly 80% that was achieved for the birth cohorts 1997-2000. Despite the increase, many girls from these birth cohorts have received two doses, but nevertheless fail to meet the requirements for a two-dose programme. If the girls are not vaccinated at the correct intervals, they will receive a reminder letter from Statens Serum Institut when they turn 14 years old.

A flowchart was prepared, Figure 1,that may serve as an aid to ensure that these girls conclude their vaccination correctly. HPV vaccination is more effective before sexual debut and is targeted at 12-year-old girls. The offer covers girls and young women aged 12-17 years of age.

Tetanus mono vaccine will be discontinued

AJ Vaccines A/S has announced that it will not maintain the production of tetanus mono vaccine, which was previously produced by Statens Serum Institut (SSI). The current stock expires on 31 July 2017. No other tetanus mono vaccines are registered in Denmark, and it is therefore not possible to acquire a corresponding vaccine from another manufacturer.

For children aged 10-17 years, DiTeKiPol Booster® can be used for both primary and booster vaccination, EPI-NEWS 5a/15.

For adults aged 18 years and above, either the diTeBooster®, the diTekiBooster® or the DiTeKiPol Booster® my be used for primary vaccination as well as booster vaccination, depending on whether there is a need to protect against diseases other than tetanus (and diphtheria).

Henceforth, in connection with wound injury, an alternative combination vaccine may also be used. The previously prepared age-group-based flowcharts for decision support, EPI-NEWS 5b/15, have been updated (in Danish). The main change is that the diTe vaccine has replaced the tetanus mono vaccine. The SSI has just entered into an agreement with AJ Vaccines A/S to continue providing the diTeBooster® for the next 4 years.

Healthcare workers can put any further questions they may have to the advisory phone line at Department of Infectious Disease Epidemiology and Prevention (+45 32683037) or via epi-info@ssi.dk

(P.H. Andersen on behalf of the Consultancy Team, Department of Infectious Disease Epidemiology and Prevention)