Monitoring of mortality in Denmark in relation to influenza

Systematic monitoring is a prerequisite to targeted control and prevention of infectious diseases. Influenza serves as a good example, associated with a considerable disease burden and occasionally with excess mortality in Denmark and in the rest of the world. Therefore, considerable influenza monitoring efforts are done in many countries during the influenza season, i.e. the winter period from Week 40 to Week 20.

These monitoring efforts are based on clinical and laboratory-based reports of the number of influenza cases from Danish hospitals, emergency service physicians and GPs.

These reports provide a weekly updated picture of the spread of influenza in the population, the level of influenza activity and the types of influenza virus that are in circulation. On this basis, the seriousness of the influenza season can be assessed, including if the used seasonal influenza vaccine matches the viruses in circulation. The Danish influenza monitoring system is handled by Statens Serum Institut (SSI), which publishes the latest figures and recommendations on the SSI’s website weekly.

In addition to the influenza monitoring that is based on reports from hospitals, emergency service physicians and GPs, the prevalence and severity of influenza can be monitored indirectly through ongoing monitoring of mortality in the population. In countries with a temperate climate, mortality patterns usually display a distinct seasonal variation with more deaths in the winter months and less during summer.

This effect is seen especially among the elderly and may be associated with periods with very low temperatures, among others.

Furthermore, influenza outbreaks typically cause a rise in mortality that may be detected by the systematic monitoring of all-cause mortality throughout the influenza season in conjunction with temperature data and information about the number of reported influenza cases, among others. Since 2009, the Department of Infectious Disease Epidemiology has continually received data on deaths reported to the Central Person Register and used these data in the routine influenza monitoring.

The expected number of deaths is determined on the basis of the historically observed number of deaths per week, and excess deaths are estimated based on the calculated deviation from the expected level for the period. The calculations are done with the use of some relatively simple statistical methods and models that also assess the uncertainty of the derived estimates. A more detailed description of the methods and SSI’s experiences have previously been published in EPI-NEWS 7-8/11.

Apart from the mortality monitoring in Denmark, SSI has since 2009 coordinated a programme that monitors mortality across Europe, known as EuroMOMO (www.euromomo.eu). On a weekly basis, the programme collects the same type of information about the observed and expected mortality from about 20 European countries, analyzee these data using the same statistical model and shares the weekly mortality curves with the participating countries’ health authorities. The mortality curves are also published on the EuroMOMO website and are displayed in weekly newsletter FluNewsEurope (www.flunewseurope.org) published by WHO and ECDC.

In conjunction with data on reported influenza cases and circulating virus types, the mortality curves are used to assess if there are signs of an influenza epidemic in the participating countries. The efforts form part of the regional and global programme that monitorspossible influenza epidemics/pandemics.

Mortality in Denmark during the 2015/2016 influenza season

As presented in Table 1, the 2015/16 influenza season was associated with some excess all-cause mortality in Denmark. The overall mortality was slightly higher than in the 2014/15 season, but not nearly as high as in the 2012/13 season when the excess mortality was considerable. In contrast, the mortality was low in both 2011/12 and 2013/14.

Figure 1 presents the changes in the number of deaths per week overall for the Danish population from 2011/12 to 2015/16. The curve illustrates, among others, the particularly high mortality in the last weeks of 2012 and the first weeks of 2013, which was higher than three standard deviations. 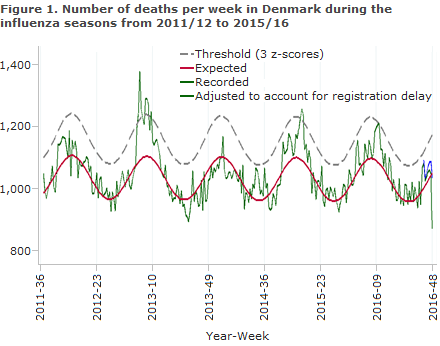 Figure 2 shows the seasonal variation in weekly mortality by age groups for the three most recent influenza seasons. The relatively low level of excess all-cause mortality seen in the 2015/16 season is in agreement with the circulation of predominantly influenza type A(H1N1)pdm09 (pandemic virus from 2009), which is usually not associated with a very high morbidity among the elderly. 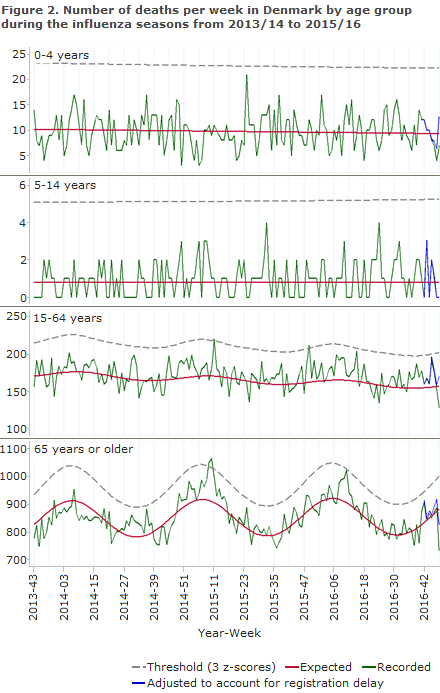 The 2015/16 influenza season was dominated by influenza A(H1N1)pdm09, particularly during the first part of the season. Later in the season, an increase was observed in the number of influenza B cases concurrently with a decrease in influenza A, EPI-NEWS 24/16. The antigenic match between the circulating type A(H1N1)pdm09 and the used vaccine strain was good, but the observed vaccine effectiveness was not quite as high as expected. The type B influenza that affected Denmark during the previous influenza season did not form part of the three-valent influenza vaccine that was used in Denmark.

The moderate excess mortality observed among elderly persons in the 2015/2016 season and the generally low level of mortality is in line with the fact that the dominant virus type was A(H1N1)pdm09. A high level of excess mortality among elderly people is typically seen in seasons when influenza A(H3N2) is the dominant type, as was the case in the 2012/13 season. In contrast, the 2015/16 season was characterised by a relatively higher mortality among younger persons, which is typically the case in seasons with circulation of influenza A(H1N1)pdm09.

The systematic monitoring of mortality in Denmark and in Europe through the EuroMOMO programme illustrates how changes in mortality related to the spreading of seasonal influenza in the population may be described. Based on the monitoring of mortality in the population, the severity of particularly virulent influenza types or other threats against the public health may be assessed. Thanks to the European collaboration, the participating countries can therefore rapidly prepare to counter the effects hereof.

Furthermore, the World Health Organisation (WHO-EURO) provides financial support for the SSI’s work to expand the EuroMOMO programme, thus to include new member countries, and thereby further strengthen the capacity to ensure the early detection and control of a developing influenza epidemic/pandemic. The EuroMOMO annual report for the 2015/2016 season will be published shortly.
(L.S. Vestergaard, J. Nielsen, T.G. Krause, K. Mølbak, Department of Infectious Disease Epidemiology)

Furthermore, it was determined that all girls who at this time had received a minimum of one Gardasil® should conclude their vaccination with this vaccine before the end of January 2017. As fewer vaccines than expected have been ordered for both of the HPV vaccines in 2016, some Gardasil® vaccine remains in stock, and the vaccine has a long shelf life. To avoid that the vaccine should go to waste, it was decided to extend the offer to conclude vaccination with Gardasil® to the end of December 2017, or as long as the vaccine remains in stock. Gardasil® will remain available only through order by phone to the SSI Order Office.

Girls aged 9-13 years of age who had initiated a vaccination course with the four-valent HPV vaccine Gardasil® before 1 February 2016 should be given two doses at a minimum 6-month interval, and the vaccination series must be concluded within one year. If these intervals are not observed, or if vaccination is initiated in girls who had turned 14 years old at the time of their vaccination, three injections are recommended on Day 0, and then at 2 and 6 months.

In case of delayed vaccination, the next vaccine should be given as soon as possible; under no circumstances should the vaccination sequence be re-initiated.
(L.K. Knudsen, P.H. Andersen, P. Valentiner-Branth, Department of Infectious Disease Epidemiology)