Two waves of influenza, initially influenza A (H1N1)pdm09 virus and subsequently influenza B virus characterised the 2015/16 influenza season in Denmark. Even though the influenza activity only increased towards the end of January 2016, the season was prolonged and included the highest number of laboratory-confirmed influenza cases since the introduction of monitoring of laboratory results via the microbiology database (Miba), in the 2010/11 season.

Even though more patients were admitted to intensive care units than in the two preceding seasons, the excess mortality was in line with that observed last year.

From Week 40 in 2015 to Week 20 in 2016, the occurrence of influenza-like illness (ILI) was reported to the sentinel surveillance by an average of 122 GPs weekly. The ILI occurrence was also followed daily via the nationwide surveillance performed by emergency call service physicians and also via the 1813 Helpline in the Capital Region of Denmark.

Since 2013/14, ILI in the population has also been monitored through Influmeter; a web-based monitoring system in which anyone residing in Denmark can report influenza-like symptoms. In contrast to the other monitoring systems that are based on healthcare contacts, Influmeter contributes with information about ILI in the part of the population that does not see a doctor when they are affected by ILI. More information about Influmeter.

Since 2014/15, serious influenza has been monitored through weekly data capture from existing registers. Patients diagnosed with influenza are identified in the MiBa, and information on admission to hospital, intensive care therapy and underlying condition is collected from the National Patient Register.

Mortality in the population in general is assessed through daily collection of information on deaths from the CPR Register.

The share of patients who contacted their GP for ILI was increased from week 5 through week 12 and reached medium intensity. According to sentinel as well as emergency call service physician surveillance, the influenza activity was higher than in the two previous seasons, but not higher than in seasons 2009/10, 2010/11 and 2012/13 (Figures 1 and 2). 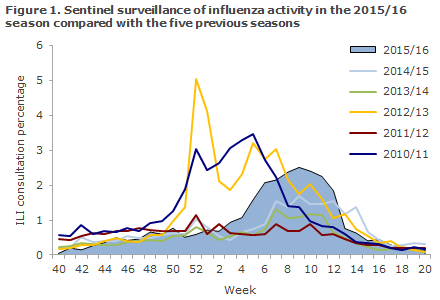 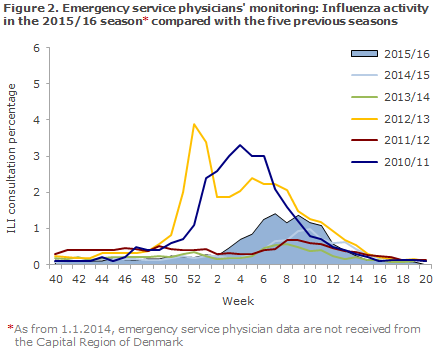 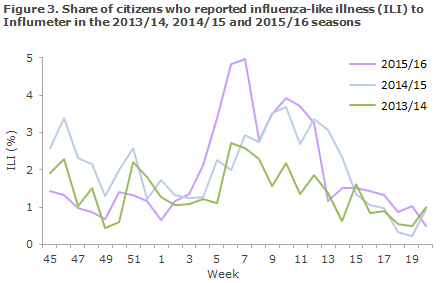 For comparison, in Denmark the 2012/13 season, which is the season with the second-highest number of samples, only 15,000 patients were tested of whom 3,500 tested positive to influenza, Figure 5. 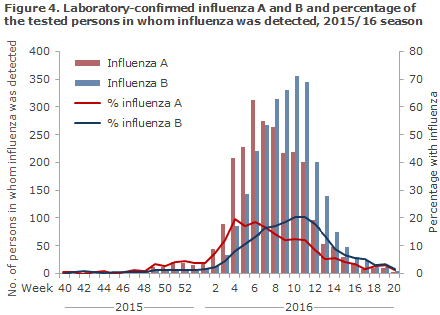 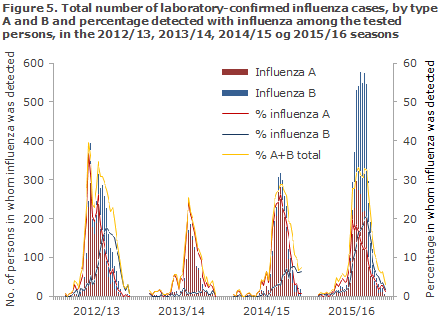 In the course of the season, the National Danish WHO Influenza Centre at the SSI tested a total of 2,317 influenza samples, including 287 submitted by the sentinel physicians, 308 diagnostic samples submitted by GPs and other laboratories, and 1,722 surveillance samples submitted by departments of clinical microbiology. Among these, 1,899 patients tested positive for influenza virus type A or B. The distribution of patients by identified virus strains is presented in Table 1. A total of 51% of the influenza-positive patients had become infected with H1N1pdm09 virus, 5% with H3N2 virus and 44% with influenza B virus.

The Department of Virology, SSI, performed PCR-based testing of 373 airway samples for more than 20 known airway viruses of which 176 (47%) were positive for influenza, and 197 (53%) tested positive for other airway viruses. Rhinovirus (16%) was the second-most frequently occurring virus, followed by RSV (12%), human metapneumovirus (6%), parainfluenza virus (6%), adenovirus (5%), coronavirus (4%), enterovirus (4%) and parechovirus (0.3%) Figure 6. 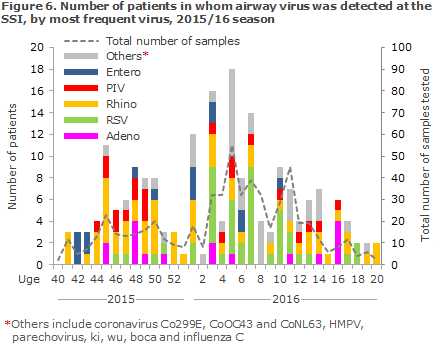 The National Danish WHO Influenza Centre at the SSI offers testing of influenza samples for antiviral resistance. Furthermore, the Centre is responsible for an antiviral project performed in cooperation with departments of clinical microbiology that focus specifically on the development of resistance in patients receiving treatment with antiviral medicines at Danish hospitals. In the 2015/16 season, a total of 90 samples were tested for resistance to the neuraminidase inhibitors oseltamivir (Tamiflu®) and zanamivir (Relenza), and no samples were resistant to both of these antiviral agents. Last year, double-resistance was seen in one patient. The currently circulating influenza viruses are all naturally resistant to the ion channel inhibitors Amantadine and Rimantadine.

From week 40 through week 20, a total of 325 patients with laboratory-confirmed influenza received intensive care, according to the National Patient Register. This is more than in the previous two seasons when 202 and 145 patients, respectively, received treatment, but fewer than in 2012/13 when 340 patients with confirmed influenza received intensive care, Figure 7. Information about ECMO (extracorporal membrane oxygenation) treatment was given for 18 patients. 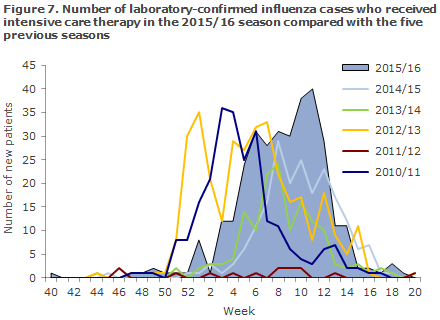 Even though no periods have recorded a higher number of deaths than expected, the full season from week 40 through week 20 has seen an excess mortality of 445 deaths among 15-64-year-olds. This is at par with the past four seasons.
Calculation of excess mortality includes all deaths, regardless of cause.

Seasonal influenza vaccination was offered free of charge to specific groups from 1 October to 31 December 2015 and also to pregnant women in their second and third trimesters and to persons with immunodeficiency and their contacts until 1 March 2016, EPI-NEWS 39/15.

According to data from the Danish Vaccination Register, a total of 593,445 citizens accepted the offer, including 103,330 chronically ill patients, 18,649 early retirement pensioners, 7,412 pregnant women, 2,100 household contacts to immunosuppressed persons and 434,032 persons aged 65 years or above. Compared with last year, slightly fewer vaccinations were given to all risk groups - apart from the group of pregnant women in which approx. 2,000 more were vaccinated than in the 2015/16 season.

The vaccination coverage among elderly citizens aged > 65 years decreased slightly from 45% to 44%. A total of 27,000 vaccinations were registered as having been given to persons not belonging to the risk groups, compared with approx. 500 persons last year. This considerable increase was owed to an increase in the number of vaccinations that were registered directly in the DVR by health workers. The number of influenza vaccinations given to risk groups and the vaccination coverage among elderly persons above the age of 65 years distributed by area and municipality are available at www.ssi.dk/data.

Season 2015/16 started with a wave of influenza A that peaked in the beginning of February after which followed an even larger wave of influenza B that would not peak until mid-March. Despite the high number of detected cases, the influenza activity in the population, assessed by the share of patients who contacted their GP or the emergency call physicians, was only slightly above the number recorded in the previous two seasons and at medium-level.

The majority of influenza A cases are due the subtype (H1N1)pdm09 that has been in circulation since the 2009 influenza pandemic. This subtype is known for affecting young adults and middle-aged persons more. In these age groups, the virus may cause serious infection, whereas older people are less susceptible. The patients with this subtype who received intensive therapy were also younger than patients who had influenza A H3N2 or influenza B. In the European surveillance of mortality (EuroMOMO), which is headed by the SSI, an excess mortality was also observed among persons aged 15-64 years in Europe, which coincided with influenza activity. Nevertheless, the excess mortality was lower than last year.

Influenza B Victoria also established a strong footing in the population. This type has not been in circulation in Denmark for several years, nor was it included in this year’s seasonal influenza vaccine and therefore more people were susceptible. Influenza B is said to run a milder course than influenza A. This concurs with the fact that only 30% of the patients who received intensive therapy had influenza B compared with 54% of all detected influenza cases. Several influenza vaccine manufacturers have shifted to producing four-valent influenza vaccines that protect against two influenza B viruses and which would have provided a better protection against influenza B in this season. Nevertheless, the new vaccines are in too short supply to satisfy the demand on the European market, and the new vaccines are much more expensive. Therefore they have not yet been introduced in Denmark.

This year, the protection against influenza infection afforded by the influenza vaccine was limited due, among others, to the high occurrence of the influenza B Victoria type that did not form part of the vaccine. Nevertheless, influenza vaccination remains the best available prevention against complications to influenza, complications which may lead to admission and death, particularly in the risk groups. It is therefore cause for concern that the vaccination coverage among the elderly remains below 50%; far from the 75% coverage recommended by the WHO.