In Denmark, invasive meningococcal disease (MD) is monitored via the clinical notification system (Form 1515) and by the Neisseria and Streptococcal Reference Laboratory, which receives meningococcal isolates from the departments of clinical microbiology. 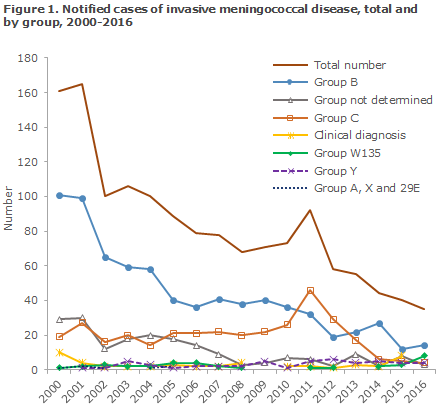 The highest incidence of MD was seen in 1987 and in 1993 with 287 and 276 cases, respectively. Subsequently, a gradual decrease in MD incidence has been seen, apart from a brief period in 2011 when the incidence increased to a total of 92 cases. The 2011 increase was caused by an increase in the number of group C cases, Figure 1 and EPI-NEWS 1/12. The incidence of group C MD has now decreased spontaneously once again. In 2016, a total of 35 MD cases were reported, which is the lowest number since monitoring was initiated in 1980, EPI-NEWS 37/16. These cases were distributed on 14 cases caused by Group B, 8 by W135, 4 by Y, 3 of the unknown group and 1 case of X and 29E, respectively.

The eight cases of W135 detected in 2016 were scattered across the entire country, and are assessed to have been sporadic, i.e. unrelated cases. The majority of the cases, six, occurred in persons aged more than 50 years of age with no information about foreign travel. Two cases were seen in young persons aged 17 and 24 years, respectively. Both of these cases occurred after travel abroad to England and France, respectively. One death occurred among the cases detected in 2016; please see the next section for a more detailed description.

The W135 cases were typed. At least six out of the eight cases belong to clonal complex (cc) 11.

MD cases in the Copenhagen area in January 2017

Subsequently, a young man, who was also a student at Birkerød High School and who had been ill in December, tested positive by antibody detection (MAT). The group cannot be determined, but it is considered likely that this was also a W135 case.
At the end of January 2017, a young man died of MD W135.

In the first of the mentioned W135 cases, the diagnosis is based on DNA exclusively, and the typing is not definite, but it is assessed that this case - like the second confirmed case - will eventually be shown to belong to clonal complex cc11, which is the most frequently occurring W135 variant in Denmark.

Furthermore, a suspected, but not confirmed case of clinical MD has occurred more recently. This patient was admitted to hospital, received treatment for possible MD and has now recovered. The patient is from Birkerød High School and has received antibiotic prophylaxis and vaccination based on the two previously observed cases from the same place.
Additionally, 2017 has seen a group Y patient and a confirmed case of MD in a 2-year-old child that has yet to be grouped.

As according to guidelines, the Unit for Supervision and Guidance of the Danish Patient Safety Authority has treated all close contacts to the six MD patients. Following the detection of two MD cases at Birkerød High School, the Danish Patient Safety Authority and Statens Serum Institut decided to offer antibiotic prophylactic treatment and vaccination to all students and members of staff at Birkerød High School. Approximately 1,150 single doses of ciprofloxacin 500 mg were administered by healthcare workers at Birkerød High School on 19 and 20 January 2017. Subsequently, the SSI provided more than 1,200 doses of AWCY meningococcal vaccines to GPs for subsequent vaccination of these persons.

Prophylactic measures and duty to notify on suspicion of MD

Background for prophylactic measures on suspicion of MD

The risk that close contacts to a MD case fall ill within the next 30 days is assessed to be approx. 0.3% if no prophylactic treatment is given. The increased risk for close contacts may in part be due to a genetically conditioned increased susceptibility to MD, e.g in a family, to increased exposure to particularly pathogenic types of meningococci and to environmental factors, e.g. crowding or tobacco smoke. Antibiotic prophylaxis is given to 1) eradicate any meningococcal carrier state in persons who have had the bacterium in the upper third of the throat and who have therefore established some degree of immunity (these persons may transmit the condition to others), and 2) to eradicate the carrier state in newly infected people (who are at risk of presenting with symptoms themselves).

The effect of the vaccination adds to the effect of antibiotic prophylaxis and is given to avoid the occurrence of any new cases in the slightly longer term. It is estimated that at least 1,000 persons need to be vaccinated in order to prevent one additional case of MD.

Neither antibiotic prophylaxis nor vaccination is 100% effective. Persons who have been given preventative treatment must therefore continuously be aware of any signs of disease.

The vast majority, 97%, of MD cases are sporadic. In such cases, it is sufficient to treat close contacts as described above.

If clusters are observed (more than one case) in a delimited group of persons within a period of 1-2 months, the risk of further cases is increased. Some studies report that when two cases have been observed at a school, the risk that a third case will occur reaches 30-50%. As described above, the rationale for treating all persons in a delimited group of persons, such as a school, is to eradicate the carrier state of the pathogenic meningococcal bacterium in question.

2016 saw a total of eight notified cases of W135. W135 is normally a rare group, and in the past 30 years less than two mean annual cases have been recorded. The recent increase should be seen in the light of the fact that 2016 saw the lowest number of MD cases recorded since the monitoring was introduced in 1980. This means that W135 is now the second most common group, surpassed only by group B.

The most common variant of W135 in Denmark, clonal complex cc11, is on the rise in other countries. Thus, since 2000, W135 cc11 has caused outbreaks in the African “meningitis belt”, e.g. in 2012 in Burkina Faso, in 2015 during a large scout jamboree in Japan, and also in several South American countries. Furthermore, an increase in incidence has been observed in France, the Netherlands and England, among others. In England, the incidence of this variant has increased from less than 5% of MD cases to currently causing nearly a fourth of all cases. The mentioned clonal complex, cc11, is also seen in other meningococcal groups, e.g. in Group C. In England it was reported that whereas about 75% of the cases of W135 clonal complex cc11 have a typical clinical presentation with meningococcal bacteraemia/sepsis and/or meningitis, the final quarter are characterised by a more atypical presentation with e.g. pneumonia, septic arthritis, endocarditis or epiglottitis. Finally, an increased occurrence of gastrointestinal symptoms has been described, diarrhoea in particular. This variant is believed to have a heightened propensity to cause outbreaks and may be more aggressive than the remaining groups of meningococci. In response to the increase observed in England, a vaccination programme with tetravalent conjugate vaccine against meningococci of groups A, C, W135 and Y for the 13-18-year-olds was introduced as this age group has the highest incidence of the carrier state and an increased MD risk.

MD is an increasingly rare, but also serious infection. Therefore, continued attention to prophylactic measures is important to minimise the occurrence of outbreaks. An increase was seen in W135 in 2016, mainly caused by clonal complex cc11. The occurrence of this group will therefore be monitored very closely in 2017. It should be noted that infection with this clone can present with atypical symptoms. However, natural fluctuation characterises the incidence of various meningococcal groups. Thus, an increase was seen in the incidence of meningococcal group C in 2011, triggering considerations about the introduction of meningococcal vaccination in the Danish childhood vaccination programme (Mini HTA on meningococcal C vaccination). But the incidence receded spontaneously in subsequent years.

On 6 January 2017, the Pan American Health Organisation (PAHO) informed the WHO about 23 suspected cases, including 14 deaths, of yellow fever in Minas Gerais. The index case had symptom onset on 18 December 2016. The first laboratory-confirmed case was recorded on 19 January 2017.

Until 2 February 2017, a total of 901 suspected cases have been reported, of which 151 have been laboratory-confirmed, Figure 2. A total of 54 deaths (36%) have been reported among the confirmed cases. This is the highest number of yellow fever cases in Brazil since 2000.

In parallel, a large number of cases have been reported among non-human primates (NHP), i.e. monkeys, in São Paulo and Espírito Santo, several of which are laboratory confirmed. Espírito Santo, which borders on Minas Gerais, is not normally considered a yellow fever-endemic area, although cases have previously been reported in the 1933-1940 period.

In January 2017, several municipalities in Espírito Santo reported the occurrence of dead monkeys. Reports of mortality in the monkey population is considered a risk marker for human yellow fever and is used to define risk areas in order to prevent and control yellow fever outbreaks.

Vaccination, including in extended risk areas

There is no requirement for yellow fever vaccination when entering Brazil from Denmark, but vaccination is normally recommended for all travellers above 9 months of age to areas of Brazil that are associated with a risk of yellow fever transmission, i.e. anywhere in the states of Acre, Amapá, Amazonas, Distrito Federal - including Brasilia - Goiás, Maranhão, Mato Grosso, Mato Grosso do Sul, Minas Gerais, Pará, Rondônia and Roraima and Tocantins.

Due to the outbreak, the yellow fever risk areas have currently been extended to also include the following states:

- Espírito Santo: The entire state, except for urban areas of Vitoria

Specifically, yellow fever vaccination is recommended for anyone visiting the Iguazu Falls, regardless of whether they are entering the area from Argentina, Paraguay or Brazil. The coastal cities, including Rio de Janeiro, Sao Paulo, Salvador, Recife and Fortaleza, are not yellow fever risk areas. In addition to vaccination, mosquito bite prophylaxis is recommended for protection.

The vaccine may be given as from 9 months of age. Onset of protection is 10 days after vaccination. A single vaccination provides lifelong protection. This also applies to persons who have previously been vaccinated against yellow fever, EPI-NEWS 27a/16.

Yellow fever in Brazil follows a cyclical pattern alternating between endemic occurrence, with e.g. isolated cases among unvaccinated patients, and epidemic occurrence with outbreaks in human populations with low vaccination coverage. This cyclic pattern is caused by changes in the occurrence of infections among NHP. The previous outbreak of yellow fever, which occurred in 2007-2009, counted more than 100 cases and recorded a mortality of 52%.

The WHO estimates that the risk that yellow fever may spread within Brazil is currently high. The growing number of confirmed cases in Minas Gerais and the cases recorded in the two new states as well as the infection of NHP in the states indicate that the outbreak is spreading geographically. The Brazilian health authorities have implemented several measures relating to the outbreak, including among others, vaccination campaigns and mosquito control.