The SSI's vaccination recommendations for foreign travel have been updated slightly, EPI-NEWS 27b/16.

The Department of Infectious Disease Epidemiology has revised the WHO’s latest country-specific recommendations for yellow fever vaccination and reports the following changes for 2016:

Burkina Faso: no longer a requirement for all travellers, but for travellers above 9 months of age from endemic areas, including transit stays.

Rwanda: Now only vaccination requirement for travellers above one year of age who arrive from countries where there is a risk of yellow fever transmission.

Meningococcal disease:
To obtain a visa for Saudi Arabia, anyone doing a pilgrimage shall have received the tetravalent vaccine against meningococcal disease of serogroups A+C+W135+Y no later than 10 days prior to entering the country, and the vaccine must have been administered within a 3-year-period.

Two four-valent conjugate vaccines have been registered for protection against meningococcal disease caused by group A, C, Y or W135, Nimenrix® and Menveo®.

Nimenrix® can be used for children aged ≥ 1 year of age and for adults. The vaccine is administered as a single dose.

Menveo® can be used for children aged ≥ 2 year of age and for adults. The vaccine is administered as a single dose.

If indicated, children aged 2 months to 1 year may receive primary vaccination in the form of two Menveo® doses given at a minimum 1-month interval. The Danish Medicines Agency has previously assessed that the vaccine may be used off-label in this age group, EPI-NEWS 37/10. In case of continued risk of exposure, a booster dose is given 12 months after the primary vaccination schedule.

Influenza:
Influenza vaccination is not a requirement, but is recommended by the Saudi Arabian authorities, particularly in persons with chronic conditions.

Furthermore, it is recommended that travellers observe standard hygiene advice, including:

Persons who in the first 14 days after returning from the Arabian Peninsula experience severe infection of the respiratory tract (fever with pneumonia and/or difficulty breathing) or other severe infectious disease should see a doctor.

For travellers visiting the Olympic Games in Rio in the summer of 2016, on 9 June 2016 the ECDC published an updated health risk assessment for travellers. It is still assessed that the risk of being bitten by a mosquito and therefore of becoming infected with Zika virus or other mosquito-transferred conditions (dengue fever and chikungunya) is generally very low as the games coincide with the Brazilian winter in August/September.

Nevertheless, the risk of malaria and yellow fever is higher in Manaus, Belo Horizonte and Brasilia, where some soccer matches will take place. Visitors to these areas should consider pharmacological malaria prophylaxis and receive yellow fever vaccination. Furthermore, travellers should always use mosquito bite protection when visiting areas with a risk of mosquito-transferred conditions, i.e., all of Brazil.

The main health risk for travellers visiting the Olympics is considered to be gastrointestinal infections due to poor food hygiene and infection with resistant intestinal bacteria. All travellers to Brazil should be protected against diphtheria, tetanus and hepatitis A through vaccination.

The first half of 2016 has seen an increased occurrence of whooping cough in Denmark. In the months of May and June in particular, the number of laboratory-confirmed cases was higher than expected. In the first six months of 2016, a total of 726 cases of whooping cough were detected. This constitutes a substantial increase compared with the corresponding period in 2015 and 2014, respectively, when 437 and 363 cases were detected. The increase was particularly pronounced in the areas of North and East Zealand, but signs of an increased occurrence were also observed on Funen and in East Jutland.

Whooping cough is less seasonal than other airway infections, but the highest number of cases is normally seen in the autumn. The monthly occurrence varies considerably, Figure 1, but whereas the 2007-2015 period saw 56 detected cases per month, 2016 has so far seen an average of 121 detected cases per month. The age distribution for whooping cough in 2016 is in line with the corresponding distribution from previous years. 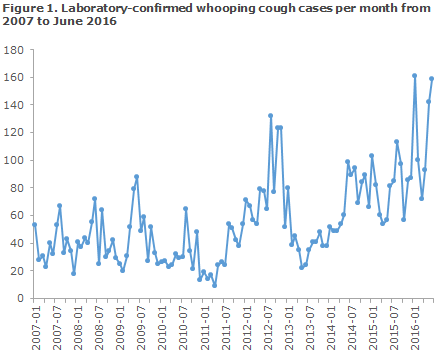 The most recent whooping cough epidemic in Denmark occurred in 2002 counting a total of 1,946 cases, Figure 2. Since then, the diagnostic possibilities have been improved through the introduction of serological analyses, and increasing use of this method in recent years may have contributed to the increased number of detected cases, mainly among older children and adults, EPI-NEWS 16/16. It is presently too early to say if the current increase is the beginning of a nationwide whooping cough epidemic, but physicians should currently pay extra attention to the diagnosis in children as well as adults. 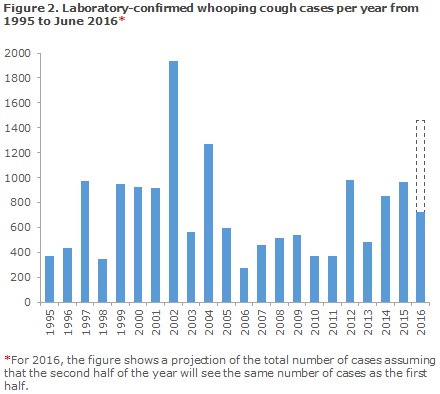 The classic course of whooping cough is characterised by sudden, severe spells of coughing that cause difficulty breathing, vomiting after the coughing spell and a whooping sound when the child manages to breathe in once again. In older children and in adults, the vomiting and the whooping sound may be absent. The condition may last for up to three months, but is only infectious in the early part of its course.

Antibiotics treatment may be used to reduce the infectious period, but will only rarely affect the symptoms. The most important use of antibiotics is for post-exposure prophylaxis for vulnerable persons, see EPI-NEWS 16/16 or the SSI’s website.
In the early stages, whooping cough may be detected by PCR analysis of a nasopharyngeal swab, but if the patient has coughed for more than a few weeks, PCR will rarely test positive. Detection of antibodies in a blood sample is then the optimal choice (but not for children below the age of eight years or other persons who have recently received whooping cough vaccination, see Diagnostik-Nyt (in Danish), March 2010).

The Department of Infectious Disease Epidemiology is receiving an increasing number of requests from citizens who state that their GP has invited them to contact the SSI. The Department of Infectious Disease Epidemiology provides advice to healthcare workers only, and is unable to provide counselling of private citizens/patients, including in the form of travel advice. For travel-related advice, physicians may refer their patients to Travels and Infectious Diseases (Rejser og smitsomme sygdomme, in Danish) or to a vaccination sites.

Unless special circumstances arise, EPI-NEWS will not be published in Weeks 28-32. The editorial team wishes the readers of EPI-NEWS a pleasant summer.