This report comprises all cases of whooping cough detected in Denmark in 2015, by culture, PCR or serology.

This constitutes a slight increase with respect to 2014, and is nearly at par with the incidence in 2012 when whooping cough was observed at high levels across Denmark, Figure 1. The number of cases and incidence per country area in the 2012-2015 period are presented in Table 1. 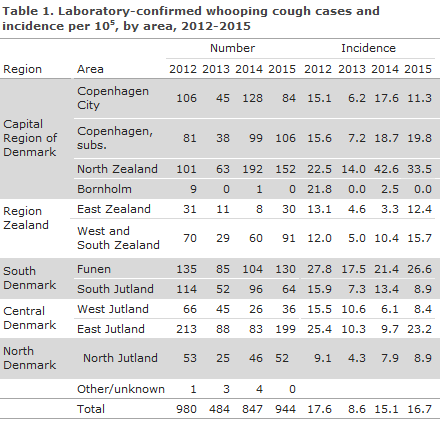 Table 1 shows that the highest frequency in 2015 occurred in the months of August and September.

Distribution by age and age-specific incidence are presented in Table 2. The highest incidence was recorded among infants below 1 year of age, see “Whooping cough in children below 2 years of age” below, and among larger children in the 10-14 years age group.

As in previous years, a female preponderance was observed as the F/M ratio was 1.3.

The number of cases observed in 2015 is presented in Figure 2, by age groups. 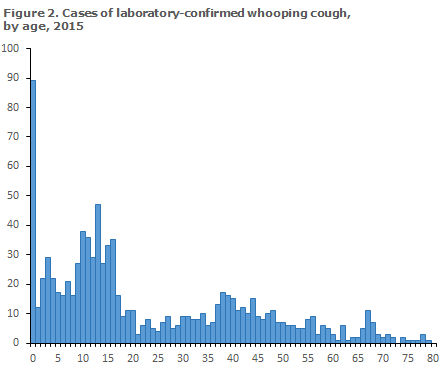 Table 3 shows the age distribution by area, and reveals considerable regional differences. Thus, 23% of the cases in West and South Zealand occurred among adults aged 50 years or above, whereas this share was only 3% in East Zealand. Correspondingly, 23% of the cases recorded in East Zealand were adolescents/young adults aged 15-19 years of age, whereas the corresponding share was only 4% in North Jutland and in the City of Copenhagen. 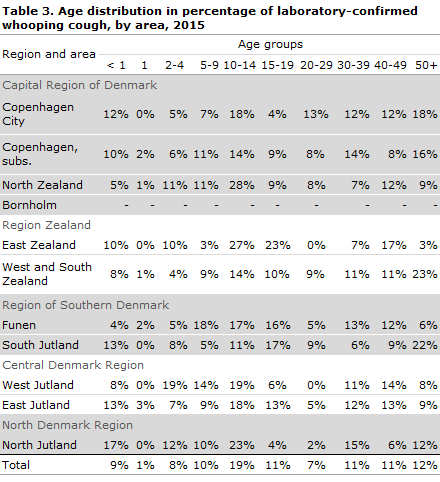 As in previous years, PCR was the most frequently used method as it was employed in 75.6% of the total number of detected whooping cough cases. Serology was used in 23.8% of the detected cases, and culture in 0.5%.

Serology is used for diagnostics only in persons aged 8 years or older as antibodies from whooping cough vaccinations disturb the analysis for a few years after vaccination. Serology is particularly well-suited for diagnosis of adults, which is also reflected in the distribution showing diagnostic method by age, Figure 3. PCR and serology complement each other as PCR can be employed only in the beginning of the disease course, whereas serology can be used only after a few weeks with symptoms.

In 2015, the occurrence of laboratory-confirmed whooping cough in Denmark was in line with that observed in 2012 and 2014.

As in previous years, the highest incidence was observed among children below the age of 1 year. Children in this age group are particularly exposed to serious and occasionally life-threatening whooping cough infection; partly because they are young, and partly because they have not yet been fully vaccinated as they have received no more than a maximum of two of the three DTaP-IPV/Hib vaccines recommended for infants; see “Whooping cough in children below two years of age”, below.

As in previous years, the age group that recorded the second-highest incidence was older children and adolescents. The high frequency in this age group clearly underlines that the protection achieved through booster vaccination at 5 years of age is not prolonged, but rather recedes already after 4-12 years.

Worldwide, an increasing number of whooping cough epidemics is seen, but the latest epidemic in Denmark was recorded in 2002, with an incidence of 36 per 105. The increased frequency recorded in recent years, Figure 1, may, in part, be explained by an increase in the use of serology as a diagnostic method.
(T. Dalby, Microbiology and Infection Control)

2015 saw a total of 108 notified cases of whooping cough in children below 2 years of age, including 56% boys and 44% girls. Small differences between the number of laboratory-confirmed and notified cases < 2 years are caused by different registration and reporting procedures at year’s end.

The age distribution in months for children below the age of 2 years is presented in Figure 4. A total of 96 (89%) were children below 12 months of age.

Among the 108 notified children below 2 years, 71 (66%) were unvaccinated, whereas four (4%) had received all three whooping cough vaccinations (DTaP-IPV/Hib or Infanrix Hexa®).

Among the 108 cases notified in 2015, a total of 72 children (67%) were admitted for one or more days, Figure 4. Among the youngest infants below 5 months of age, who had received a maximum of one vaccination, 62 of 70 (89 %) were admitted.
Based on the notifications, no deaths due to whooping cough were recorded in this age group in 2015.

The source of infection was known in 42% of the notified children. Among the known sources of infection, siblings and other household members comprised 73%.

In 2012, a total of 159 cases of whooping cough were notified in children < 2 years of age. This number was markedly higher than any other number recorded over the past many years, EPI-NEWS 15/13. In 2013 and 2014, the frequency was once again at a par with the level observed in the 2007-2011 period, whereas the number of notified cases in 2015 followed a slightly increasing trend.

Surveillance data seem to indicate that this trend will continue as a total of 32 cases in children below two years of age have been notified in the first three months of 2016 compared with 19 cases in the first three months of 2015. Timely whooping cough vaccination of infants in the form of DTaP-IPV/Hib is essential as significant protection against whooping cough is achieved only after two vaccinations.

Therefore, the recommended vaccination times at 3, 5 and 12 months of age should be followed, to the extent possible.

Furthermore, a DTaP-IPV booster is recommended at 5 years of age. The reason why whooping cough booster vaccination is done at 5 years of age is that the protection achieved recedes in the course of some years. Older children who have only received primary vaccination therefore risk getting whooping cough at a later stage and constitute an infection reservoir for younger, unprotected children, e.g. new siblings below 1 year of age who are not yet fully vaccinated.

It is to be expected that some children below the age of 2 years will fall ill with whooping cough despite full vaccination and that the majority of those who fall ill will be infants below 5 months of age. The vaccine does not provide 100% protection against the condition, but does protect against a serious disease course. None of the four children who were notified with whooping cough in 2015 despite having received 3 vaccinations were admitted to hospital due to the condition.
(L.K. Knudsen, P.H. Andersen, Department of Infectious Disease Epidemiology)

Vaccination prior to exposure to infection is the most important strategy in the prevention of whooping cough. Vaccination only provides significant protection after two vaccinations, and vaccination alone is not recommended for post-exposure prophylaxis.

Whooping cough is extremely infectious, mainly in the first 2 weeks of the disease course, corresponding to the catarrhal and the first part of the paroxysmal (coughing) stage. After 3 weeks, the risk of infection is negligible.

Assessment of the degree of exposure is important when deciding on initiation of prophylactic treatment with antibiotics.

Exposure is defined as:

- stay for a minimum of 1 hour in the same room as a patient who is presenting with whooping cough symptoms.

Prophylactic treatment after relevant exposure should be considered, after swabs have been taken, in:

- All children < 6 months, regardless of their symptoms

- Unprotected children aged 6-24 months. (no or only one vaccination), irrespective of symptoms.

A negative swab result should not lead to cessation of treatment.

On suspicion of whooping cough, specimens should be taken for PCR examination from siblings and other household contacts with unprotected children aged < 2 years, even where there is no known exposure. If these persons are more than 8 years old and have been coughing for more than 2 weeks, the throat swab for PCR examination should be replaced by a blood sample for serological testing.

Whooping cough often requires no medical treatment. Antibiotics may, however, reduce the infectious period. It remains unknown if antibiotics can also reduce the duration of the condition. This presupposes that correct treatment is initiated during the catarrhal stage, which is often difficult unless the person in question is known to have been exposed to whooping cough.

Whooping cough is treated with macrolide antibiotics in the form of clarithromycin for 7 days in children > 2 years and in adults.

Clarithromycin should not be used in children < 2 years of age or in pregnant women.

For children below 2 years of age and for pregnant women in their second and third semesters, 5 days of azithromycin may be given.

Treatment should therefore be based on advice from the local department of clinical microbiology.

Precautions in case of disease cases

The Medical Officers of Health are responsible for initiating any measures in day-care institutions and schools in case of whooping cough. Children with whooping cough who seem otherwise unaffected may attend their child-care institution or school in the period in which a certain risk of infection remains.

This is owed to the fact that the overwhelming majority of children have received vaccination.

However, children should not attend their institution or school while the spells of coughing are severe enough to cause a clear difficulty in breathing orvomiting.
(C.H. Møller, P.H. Andersen, Department of Infectious Disease Epidemiology, K. Fuursted, Microbiology and Infection Control)