2016 saw a total of 128 notified cases of purulent meningitis. Table 1 shows the distribution by aetiology and age. The incidence was highest in infants. Other age groups with a high incidence included 1-4 years, 15-19 years and above 50 years of age. Meningococci caused 17 cases in 2016, EPI-NEWS 49/17.

The other bacteria reported were other streptococci than pneumococci and Listeria monocytogenes, Haemophilus influenzae, Escherichia coli and Staphylococcus aureus. The category 'Unknown' covers clinically reported cases where bacteria are not detected, Figure 1.

Underlying diseases were established by linking the civil registration numbers (CPR) recorded in the monitoring of purulent meningitis with the National Patient Registry. Underlying diseases and sequelae were categorised into groups based on diagnosis codes. Infections were included as from one month prior to the current meningitis case, but no time restrictions were applied for the remaining underlying diseases/predispositions. Only diagnosis codes given more than five days after disease onset or after the patient’s admission for meningitis were categorised as sequelae. 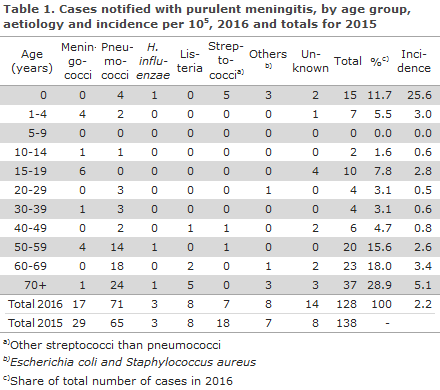 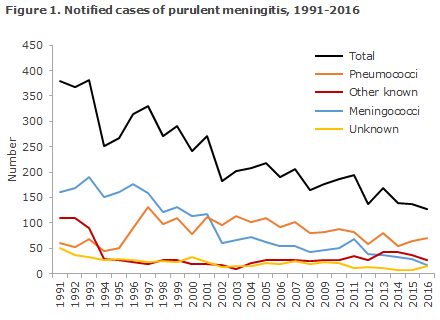 Seven children aged 0-10 years had meningitis, five of whom were unvaccinated. Sequelae were recorded in four children: three 0-year-olds suffered hearing impairment, visual defect and epilepsy, respectively; and one child aged 10 years who had intracranial lesions as a predisposing factor suffered visual and hearing impairment. One child aged four years had a dural defect, but recovered without sequelae.

For a total of 29 out of the 71 (41%) cases, information was stated about another infection prior to the condition, most frequently an infection of the ear (23 persons). Two persons had pneumonia and sinusitis, respectively.

For a total of 41 out of 64 persons above 10 years of age (64%), an underlying disease was recorded: 21 with heart disease, 19 with an endocrine condition, 15 with pulmonary disease, 10 with cancer, 6 were immunocompromised and 5 had previously undergone shunt surgery. Several persons had more than one condition recorded. One was splenectomised, and one person had suffered several previous meningitis episodes.

A total of nine patients died in connection with their disease (seven women and two men), one person was 21 years old, the remaining were between 64 and 88 years. A total of six had underlying disease, five had another infection prior to their condition and one had several previous meningitis episodes.

Among the 55 surviving patients aged more than 10 years of age, 46 (84%) had information about sequelae; 22 suffered impaired hearing, 10 developed epilepsy, 6 persons had shunts inserted and for 1 person hydrocephalus was recorded. Five suffered other neurological damages, three visual defects, two headaches and one suffered learning disabilities. More than one sequela was recorded for several persons.

Meningitis due to other streptococci than pneumococci was detected in seven non-fatal cases.

Additionally, one case of non-haemolytic streptococci, S. mitis, was notified.

The five GBS cases occurred in infants, one of whom was premature. The children were 1, 1, 2, 9 and 16 days old, respectively. Neonates with GBS aged 0-7 days have presumably been infected in the birth canal. Sequelae were recorded for two children in the form of epilepsy and hydrocephalus.

Three cases of H. influenzae were notified; one was a type b case in a 5-month-old child who had received one vaccination. The child had congenital malformations.

Two cases occurred in men aged 56 and 76 years with non-capsulate strains of biotype II and III, respectively, the groups of which could therefore not be determined. One of the men had suffered a fracture to the base of the skull; the other had cardiopulmonary disease. For the latter man, hearing impairment was reported.

A total of eight cases of meningitis caused by L. monocytogenes were reported in seven Danes and one refugee. Four of the cases were women aged 64-89 years, and four were men 44-76 years; all cases had become infected in Denmark. For three of the cases, the diagnosis was based on clinical particulars and a positive blood culture. Four cases had type 1 and another four cases type 4.

Underlying disease and or predispositions were recorded for five patients, two patients subsequently had epilepsy, one patient suffered visual impairment and one patient died.

Five patients had meningitis caused by Escherichia coli. Three were neonates and premature and were presumably infected via the birth canal. One of the children subsequently developed epilepsy. Two of the men were in their seventies; both had underlying disease recorded; one of the two patients died.

Three persons were notified with meningitis caused by Staphylococcus aureus; two men and one woman aged 20, 66 and 75 years, respectively. One of these patients had underlying disease and was a dialysis patient; the other had a disseminated infection; both of these patients died. The 20-year-old patient subsequently developed arthritis.

In a total of 14 cases, patients were notified on the basis of clinical tests and/or cell counts and microscopy of cerebrospinal fluid consistent with purulent meningitis, but without detection of bacteria by culture or PCR. Seven of these cases had initiated treatment before a lumbar puncture had been performed.

Underlying disease and/or risk factors were recorded for 12 of the patients.

Subsequently, one child was registered with hearing impairment/loss and two adults with epilepsy. No patients died.

The number of purulent meningitis cases has followed a decreasing trend over time. Thus, more than 300 cases were seen in 1997 and only 128 in 2016, which is the lowest number recorded since monitoring was introduced, Figure 1. The decrease is driven by a drop in the number of cases of meningococcal meningitis, EPI-NEWS 49/2017. Furthermore, pneumococcal vaccination was introduced into the childhood vaccination programme in 2007, and this has produced a decrease in the occurrence of pneumococcal meningitis (and other invasive pneumococcal disease) in children and in the rest of the population, EPI-NEWS 41/17.

Effective childhood vaccination programmes have considerably reduced the disease burden caused by purulent meningitis in small children. Thus, 2016 saw only a single case of Haemophilus influenzae of type b (part of the vaccination programme as from 1993) compared with the approx 80 annual cases previously observed in small children, Figure 1. Similarly, the number of cases of invasive pneumococcal disease in children below 2 years of age has now been reduced by more than 70% from approx. 64 cases to 18 cases in 2016. Despite this decrease, infants still have by far the highest occurrence of purulent meningitis, Table 1. In 2016, the most frequent causes of purulent meningitis in infants were GBS, Escherichia coli and pneumococci.

The past five years have seen a total of 18 notified meningitis cases caused by Escherichia coli. This constitutes a slight increase from the usual level of approx. 7 notified cases per 5-year period which has remained stable for 15 years. This may be due to increased diagnostic attention and increased attention to notification of meningitis, but it may also reflect a real increase.

All seven cases of pneumococcal meningitis in children aged 0-10 years of age were caused by pneumococcal serotypes that do not form part of the 13-valent conjugate pneumococcal vaccine, which has been included in the childhood vaccination programme since 2010.

For the elderly, a limited increase has been observed in meningitis caused by listeria. Thus, 57 cases were detected in the past 5-year period, whereas the previous 5-year periods recorded 31 and 24 cases per 5-year period, respectively. Once again the cause of the increase is not clear, but may in part be due to a large listeria outbreak in 2014 counting a total of 20 cases, EPI-NEWS 35/14.