The 7-valent pneumococcal conjugate vaccine (PCV-7) was introduced into the Danish childhood vaccination programme on 1 October 2007, and as from April 2010 it was subsequently gradually replaced by the 13-valent conjugate pneumococcal vaccine (PCV-13) which has superior coverage. A total of three vaccinations are recommended at 3, 5 and 12 months of age.

Coverage was calculated using data from the Danish Vaccination Register obtained on 4 September 2017.

The coverage of the PCV vaccines in the childhood vaccination programme for birth years 2007-2016 was in the range 85-95% for the first PCV, 82-94% for the second PCV, and for 2007-2015 the coverage was 69-94% for the third PCV, Table 1. Modest geographical variation was observed with a slightly lower coverage for the third PCV in the areas of West and South Zealand and in the City of Copenhagen (i.e. in the municipalities of Copenhagen, Frederiksberg, Tårnby and Dragør) compared with the remaining parts of the country, www.ssi.dk/data.

Figure 1 shows the age-specific incidence of laboratory-confirmed IPD cases per 100,000 inhabitants before and after the introduction of PCV-7 and PCV-13 into the childhood vaccination programme. IPD is primarily seen in very young children and among elderly people.

The report is based on nationwide data from the Neisseria and Streptococcus Reference Laboratory (as from 2000) with the addition of data from the Danish Microbiology Database (the MiBa, as from 2010). An IPD case is defined as a disease episode for which pneumococci (Streptococcus pneumoniae) have been detected in cerebrospinal fluid, blood or another normally sterile sampling material, such as a joint. As from 1 October 2007, submission to the SSI of pneumococcal isolates for serotyping has been required by law to support the national monitoring of IPD.

The total IPD incidence in the population in the period from 2000 to 2007, i.e. before the introduction of PCV vaccination, was approx. 20 cases per 100,000 or an average of approx. 1,060 annual cases. In the PCV-13 period, the incidence has been reduced significantly by approx. 25%, equivalent to 15 cases per 100,000. With 731 detected cases, 2016 has recorded the lowest incidence since PCV was introduced. The decrease in IPD incidence is still observed both among vaccinated and unvaccinated age groups.

The most pronounced decrease was observed in children below 2 years of age whose incidence dropped by approx. 70% in the PCV-13 period (2011-2016) compared with the period prior to the introduction of PCV. This corresponds to a decrease in incidence from 55 cases prior to the introduction of PCV vaccination to 17 cases per 100,000 in the PCV13-period for this age group. 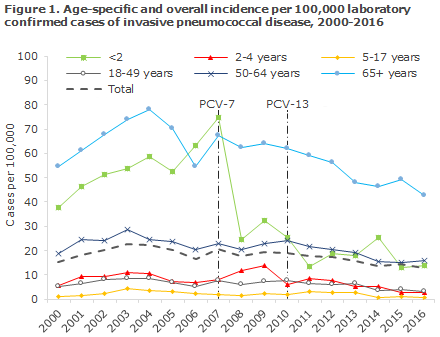 Among persons above 65 years of age, a significant decrease in IPD incidence has been seen; from approx. 66 cases per 100,000 before PCV vaccination to approx. 43 cases per 100,000 in 2016. This decrease is mainly owed to a decrease in the occurrence of the serotypes included in PCV-7 and PCV-13. The observed decrease in incidence among unvaccinated elderly persons is presumably owed to the fact that PCV reduces the carrier state in vaccinated children for the serotypes comprised by PCV and thereby reduces the circulation of vaccine serotypes in the population; the so-called herd effect.

Fluctuations are seen in the IPD incidence recorded for the different age groups. 2015 observed a minor increase for +65-year-olds, whereas the incidence in 2016 was at the lowest level recorded since the introduction of PCV. In 2014, a minor increase was seen for children below 2 years of age, which was due to an increased occurrence of a serotype that is not included in the vaccine. The increase was transitory and short-lived, and the incidences in 2015 and 2016 are on a par with the incidence seen in 2011 and are the lowest incidences seen among children below 2 years of age since the introduction of PCV.

The introduction of PCV has had a significant and lasting effect on the IPD incidence in Denmark. The effect of the vaccine is observed both among vaccinated and unvaccinated population groups, but is most pronounced among children below 2 years of age. In addition to the changes in the occurrence of serotypes, which is likely an effect of PCV, the occurrence of pneumococcal disease and the various pneumococcal types vary randomly over time. These changes may, in part, be related to factors that are not owed to vaccination; among others, a varying occurrence of the types not included in the vaccines. Since 2010 and as part of the monitoring efforts, we have included IPD cases recorded in the MiBa only. These are IPD cases that were diagnosed at a department of clinical microbiology (DCM), but where the isolate was not submitted to the SSI for serotyping of where DNA was detected without cultivable isolate. Serotyping is the most valid information available for assessment of the effect of PCV. These lacking cases are limited in number and have not changed the previously reported occurrence of the disease or the overall effect of the vaccine. We would like to take this opportunity to thank all Danish departments of clinical microbiology for their contribution to the national monitoring efforts and for a fruitful collaboration in 2016.

Since 2013, Denmark has had a special focus on notification of symptoms to the Danish Medicines Agency that are not known adverse effects of the vaccine, e.g. prolonged headache and marked fatigue. The medicine authorities have concluded that no association can be established between these symptoms and the vaccine. The negative debate about HPV has resulted in a drastic drop in the vaccination coverage in Denmark, whereas the remaining Nordic countries enjoy a high and stable coverage.

It now seems that the trend in Denmark is turning. Thus, from March to August this year, approx. 4,200 HPV vaccinations have been administered per month compared with 2,200 vaccinations per month in the same period last year. 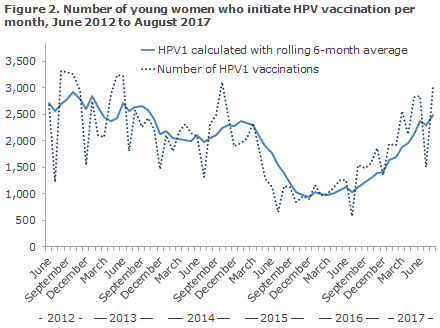 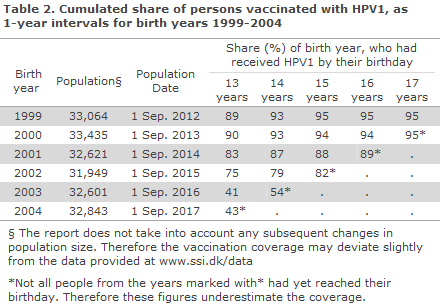 HPV vaccination is offered to all young women until they turn 18 years old. The four birth years 2001-2004 have seen a relative decrease in vaccination coverage compared with girls from previous birth years, e.g. 1999-2000. The coverage follows an increasing trend, which gives hope that these, as well as future birth years, may achieve adequate protection against HPV infection. Nevertheless, there is a trend towards more girls initiating their course of the programme at a later age than was the case when the programme was implemented. The Danish Health Authority recommends vaccination at 12 years of age to ensure protection of HPV before onset of sexual activity.