In Denmark, invasive meningococcal disease (MD) is monitored via the clinical notification system (Form 1515) handled by the Department of Infectious Disease Epidemiology and Prevention (DIDEP) and by the Neisseria and Streptococcal Reference Laboratory, which receives meningococcal isolates from the departments of clinical microbiology. MD covers meningitis, sepsis, and culture or DNA detection of meningococci in material from normally sterile locations, e.g. joints. 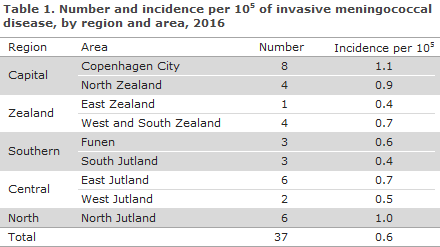 Of the 37 cases, 15 had meningitis, 18 sepsis, 2 both meningitis and sepsis; and in 1 patients meningococci were found in synovial fluid from the ankle. One patient presented with pain of the neck, increased CRP and was running a high fever; the patient was notified on clinical suspicion with no information about clinical manifestation. 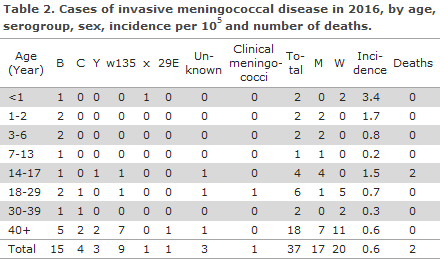 In 29 (78%) of the cases, meningococci were detected by culture, including three which were also detected by PCR. An additional six cases were diagnosed by PCR alone, one by meningococcal antibody test alone, and one patient was notified on the basis of the clinical particulars alone. In the last two cases and in two of the four PCR-detected cases, the group had not been determined.

Underlying diseases were established by linking the civil registration numbers (CPR) recorded in the MD monitoring with the National Patient Registry.

Only diagnosis codes given more than five days after disease onset or after the patient’s admission for meningitis were categorised as sequelae. Sequelae were recorded for 10 patients: Two had epilepsy, three had hearing impairment or hearing loss, two had headaches, two thromboses and subsequent amputations and one had the diagnosis code for “Other or unspecified symptom or abnormal finding in the nervous and musculoskeletal system”.

Any physician receiving an MD patient for treatment shall immediately notify the case when clinical suspicion arises. Notification is by phone to the Danish Patient Safety Authority , Supervision and Guidance (DPSA) , division North, South or East, depending on where the patient is admitted, and in writing on Form 1515 to Statens Serum Institut, DIDEP.

Household-like contacts to patients with suspected or verified MD must be offered prophylactic antibiotics.
Vaccination is offered via the DPSA following verified MD caused by group A, B, C, W135 or Y to the group of persons who have been offered antibiotics prophylaxis, EPI-NEWS 6/2017, Table 4. Vaccination must be given no later than 4 weeks after exposure. The information provided below about the various vaccines concerns persons who are offered vaccination following MD exposure.

Infants aged from 2 months to 4 months of age: Two doses, each of 0.5 ml, are given at a minimum interval of 2 months.

Infants from 4 months and older children, adolescents and adults: A single 0.5 ml dose.

Nimenrix®
May be used from 6 weeks of age: The first vaccine dose may be given as from 6 weeks of age, and the second dose must be given a minimum of 2 months later. A third (booster) dose is recommended at 12 months of age. Data on vaccination of children aged 3-12 months are limited, but we recommend that this group receive 2 doses at a minimum interval of 2 months and a third dose at least 6 months after the second dose. Nimenrix® may also be used for children ≥ 1 year and for adults.

Menveo®
As previously, Menveo® may be used for children aged ≥ 2 years of age and for adults. A single dose is given.

Trumenba®
This vaccine has been approved for prevention of infection with meningococci of group B. Henceforth, like Bexsero®, EPI-NEWS 33/14, this vaccine will be offered as free post-exposure prophylaxis to persons who have been in close contacts with a person with group B meningococcal disease. Trumenba® is marketed in Denmark and can be dispensed freely.

Trumenba® is approved for protection against MD of group B in persons aged 10 years of age or more. The primary vaccination series may be given as a two-dose or as a three-dose programme. The effects of the two programmes are comparable as they yield nearly the same antibody response once the vaccination series has been concluded. A two-dose programme is slow to provide protection as a 6-month interval is needed between the two doses. In the three-dose programme, two doses are given at a minimum interval of 1 month, and a protective effect is therefore achieved sooner. Therefore, we recommend that the three-dose programme be used for post-exposure prophylaxis in persons who are at an increased risk of invasive MD, followed by a third dose at least 4 months after the second dose.

Bexsero®
This vaccine is approved for protection against MD of group B in persons above 2 months of age. See Table 5 for the vaccination programme. As Bexsero® is not marketed in Denmark, an issue permit is needed for the vaccine when used in children below 10 years of age. Such permit is issued by the Danish Medicines Agency. It is possible to apply for an issue permit only for a single patient (individual permit).

The highest MD incidence observed so far was recorded in 1987 with 287 cases, followed by 1993 with 276 cases. Subsequently, a gradual decrease in MD incidence has been seen, apart from a brief increase in 2011 when the incidence rose to a total of 92 cases. Overall, the number of group B MD has followed a decreasing trend since the 1990s, and in the past 10-year-period it has decreased from approx. 40 annual cases in 2005-2009 to 14 in 2016. Group B has been the most frequently occurring group, except in 2011 and 2012 when an increase was observed in group C MD; an increase which was also seen in several other European countries EPI-NEWS 37/11 and EPI-NEWS 1/12. The incidence of group C MD decreased already in 2012-2014 without interventions of any kind. Since 2005, no group A MD has been notified. In 2005, two imported cases were notified. Figure 1 presents MD by groups for the years 2005-2016. 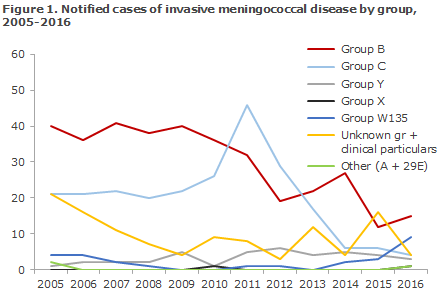 The 37 cases of MD represented the lowest number recorded since monitoring of the disease was introduced in 1980. These cases were distributed on 15 cases caused by Group B, 9 by W135, 4 by C, 3 by Y, 4 of unknown group and 1 case of group X and 29E, respectively. The latter groups are rare and were detected in synovial fluid from the ankle of an infant and in a patient who had a lumbar drain in the vertebral canal.

Serogroup W135 was previously a rare group; one or no cases have been observed annually since 2008. But in 2014, two cases of W135 were recorded, in 2015 three, and in 2016 nine. The nine cases of W135 were scattered across Denmark and are believed to have been sporadic, i.e., independent of each other. Whole-genome sequencing of the meningococcal strains in question could be performed in eight of the cases. Six of these eight cases were found to belong to the cc11 clonal complex. In recent years, this complex has caused some cases of aggressive MD with a deadly course in other countries in and beyond Europe, including England and the Netherlands.

Seven cases occurred in persons above 50 years of age for whom no information was stated about foreign travel. Two cases were seen in young persons aged 17 and 24 years, respectively. Both of these cases occurred after travel abroad to England and France, respectively. There was one fatality among these cases in 2016. Denmark has seen 33 notified cases of MD in the period from 1 January 2017 to 7 November 2017. Ten of these cases were of group W135.

In England it was reported that about 75% of the cases of W135 clonal complex cc11 have a typical clinical presentation with sepsis and/or meningitis, whereas the final quarter of cases are characterised by a more atypical presentation with, e.g., pneumonia, arthritis, endocarditis or inflammation of the epiglottis. Finally, an increased occurrence of gastrointestinal symptoms has been described, diarrhoea in particular. Currently the increase is primarily seen in adolescents. W135 clonal complex cc11 is believed to have an increased propensity to cause outbreaks and may run a more aggressive disease course than the remaining meningococcal groups.

Denmark has also seen gastrointestinal symptoms such as diarrhoea and vomiting in a patient with MD caused by W135, and we take this opportunity to emphasize that MD may also present atypically. The occurrence of MD is at an all-time low in Denmark, and fluctuations are seen in the occurrence of different meningococcal groups, but the SSI follows the development in the occurrence of W135 in Denmark closely.