In EPI-NEWS 27a+b 2016 we described that the first 6 months of 2016 had witnessed an increased occurrence of whooping cough in Denmark with an average of 121 cases per month. The increase continued and reached epidemic level after the summer period where the months of August and September recorded more than 200 cases each, including all age groups, Figure 1. This is the highest monthly occurrence since 2002 when the latest whooping cough epidemic was observed in Denmark, 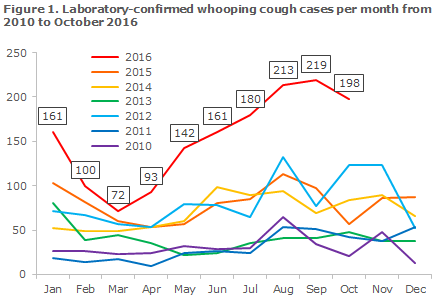 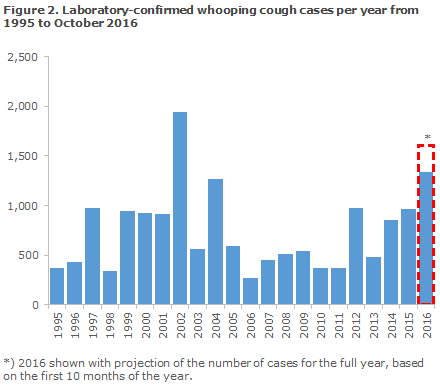 The positive rate peaked in July with 24% positive samples, but the rate has since decreased to 15%, which may be owed to the fact that the submitted number of samples rose considerably from August to October, Figure 3. Overall, nearly one in every five samples tested positive for whooping cough in 2016. The positive rate has previously reached this level in the “whooping cough season”, i.e. the second half of the year, even in non-epidemic years, Figure 3. Part of the increase may therefore be due to seasonal variation in the occurrence with more cases in the second half of the year. 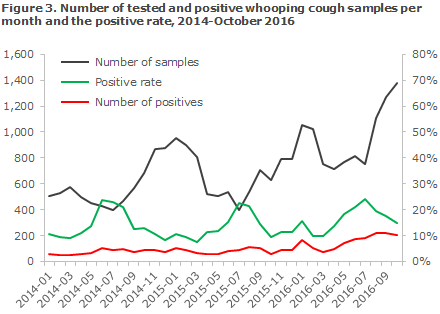 An increased number has been detected at all laboratories that perform whooping cough testing, but currently a particularly high number of positive samples are detected at the departments of clinical microbiology in the Capital Region of Denmark, Figure 4. 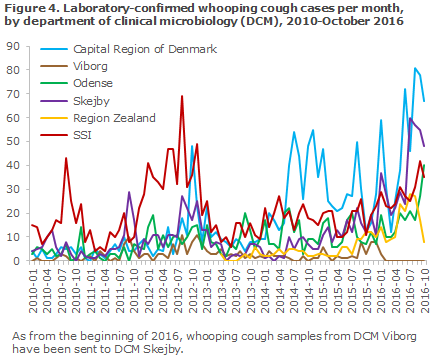 So far, 2016 has seen an increase in the age-specific whooping cough occurrence (incidence), particularly for the age groups of 1-year-olds and 2-4-year-olds, but the incidence among people above 40 years of age has also increased by nearly 100%, Figure 5. As previously, the highest incidence is being recorded among 0-year-olds. The increase observed in 2016 for this age group is approx. 32%. In children below 2 years of age, a total of 167 cases have currently been detected, compared with a total of 113 detected cases in all of 2015. 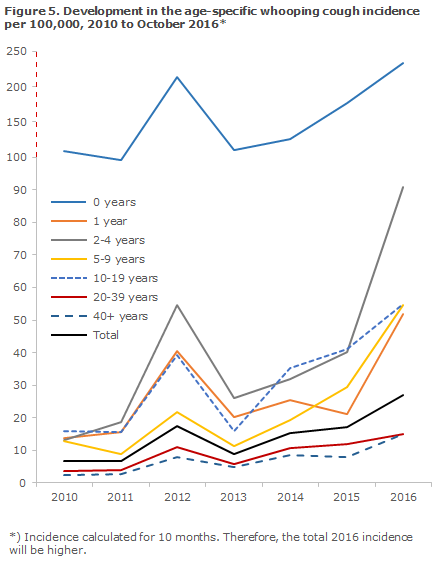 2016 has seen an increasing share of cases detected among 2-4-year-olds, 5-9-year-olds and in people over 40 years of age, whereas the share of cases in the remaining age groups is in line with or slightly lower than in the two preceding years, Figure 6. It is noteworthy that the share of children below 2 years with whooping cough seems not to be increasing. 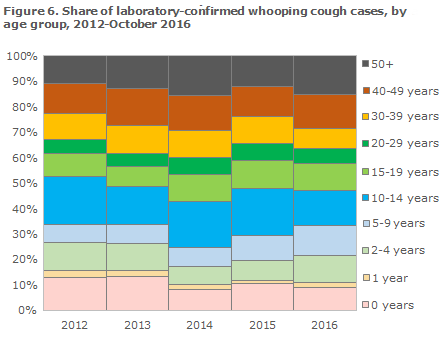 The classic whooping cough disease course is characterised by a 7-10-day catarrhal stage (range 4-21 days) with a mild cough and normally with no or only a low fewer, followed by a prolonged paroxysmal stage with sudden, severe spells of coughing with difficulty breathing, vomiting after the coughing spell, and a wheezing (whooping) sound when the child manages to breathe in. In older children and in adults, the vomiting and the whooping sound may be absent. The condition may last for up to 3 months, but is only infectious in the early part of its course.

Antibiotics treatment may be used to reduce the infectious period, but will only rarely affect the symptoms. The most important use of antibiotics is post-exposure prophylaxis (PEP) for vulnerable individuals, see EPI-NEWS 16/16 or the SSI’s website (in Danish).

In the early stages, whooping cough may be detected by PCR analysis of a nasopharyngeal swab, but if the patient has been coughing for more than a few weeks, PCR will rarely test positive. Detection of antibodies in a blood sample is then the optimal choice (but not for children below the age of 8 years or other persons who have recently received whooping cough vaccination, see Diagnostik-Nyt (in Danish), March 2010).

The main prophylactic measure for whooping cough is vaccination, and it is particularly important that infants do not unnecessarily delay their vaccinations under the childhood vaccination programme and that the recommended vaccination times at 3, 5 and 12 months are observed. A mild cold and fever up to 38 degrees Celsius do not constitute contraindication for vaccination.

Fully or partly unprotected children below 24 months of age who are exposed to whooping cough infection should be offered prophylactic treatment with antibiotics in accordance with the guidelines provided in EPI-NEWS 16/16. Furthermore, it has been shown that the risk of developing pneumonia and of admission and death among unprotected children who are exposed to infection may be reduced by vaccinating the child against whooping cough concurrently with the administration of PEP. The primary vaccines DTaP-IPV/Hib and DTaP-IPV-HepB/Hib may both be given from 2 months of age.

Furthermore, it is important that the older siblings of infants are vaccinated as recommended. In pregnant women who have whooping cough detected shortly before giving birth, i.e. less than 3 weeks before term, treatment is initiated immediately.

It is well-known that whooping cough occurs cyclically in unvaccinated and sufficiently vaccinated populations alike with peaks every 3-5 years. Barring a peak in 2012 with approx. 1,000 cases, the previous whooping cough epidemic was recorded in 2002, when approx. 2,000 cases were detected. Since then, serology has been introduced as a diagnostic method, comprising approx. 25% of all positive samples in 2012-2015, but decreasing slightly to 18% of the laboratory-confirmed cases in 2016. The vast majority of the 2016 increase was owed to an increase in the number of PCR-positive samples, indicating that the sample was taken within the first 2-3 weeks of the disease course.

Physicians are encouraged to remain extra attentive to the diagnosis, particularly among unvaccinated, but also in vaccinated young children, and to ensure sampling and PEP, if relevant, to reduce the risk of serious episodes of whooping cough infection, particularly in infants.
(T. Dalby, Microbiology and Infection Control, L.K. Knudsen, P.H. Andersen, Department of Infectious Disease Epidemiology)

Next week will be the fourth European HIV-Hepatitis Testing Week; once again, the week will focus on increasing the number of people who are tested for HIV and/or hepatitis.

The objective of the European HIV-Hepatitis Testing Week is to raise awareness of HIV and hepatitis, and not least to draw attention to the advantages of being tested so that treatment may be initiated early.

It has been demonstrated that the sooner you start treatment, the better are your chances of maintaining good health, and the risk of infecting others decreases. Even so, far too many remain unaware of their HIV and/or hepatitis status.

During the European HIV-Hepatitis Testing Week, nearly 500 NGOs, hospitals and clinics from more than 45 countries join forces to raise the number of people tested. A wide range of activities will be celebrated, from testing offered at clubs, in the street and outside of normal opening hours, to information campaigns designed to raise the awareness about HIV and hepatitis testing both locally, nationally and among the European policy makers.

You can register for the European HIV-hepatitis Testing Week at the week's website, where you will also find more information and materials that are used to underpin the various activities.

Today, at least one in three of the 2.5 million people who are living with HIV in Europe are unaware that they are HIV positive. Also, 50% are diagnosed late, which delays their access to treatment. For hepatitis, it is estimated that a similar share is unaware of their status, but unfortunately data on this are lacking. It is important to reverse this trend and have more people tested and achieve that more people initiate treatment.

The European HIV Testing Week is coordinated by HIV in Europe, which is located with CHIP under The Copenhagen University Hospital (Rigshospitalet), Clinic for Infectious Medicine. Contact CHIP at hie.rigshospitalet@regionh.dk.

(I. Sperle, D. Raben, Centre of Excellence for Health, Immunity and Infections (CHIP))

On 18 November, the Danish Ministry of Health in collaboration with the SSI, among others, will launch this year’s national antibiotics campaign. This year, the objective is to contribute to a more rational consumption of antibiotics for treatment of urinary tract infections.

The background for the campaign is the fact that women are frequently treated with antibiotics for symptoms from the urinary tract that are not due to bladder infection.

In Denmark, it is estimated that nearly 50% of women experience symptoms of urinary tract infection (UTI) without having pathogenic bacteria in their urine. Women below 30 years and above 70 years of age, in particular, often experience UTI symptoms and therefore receive antibiotics treatment. Furthermore, the number of women who are treated has increased: In 1999 an average of 82 per 1,000 women were treated with the two groups of antibiotics most frequently used for urinary tract infection; in 2015, the corresponding number was 98. In the 20-24-year age group, a particularly large increase has been observed – here, the number of patients who received a prescription to curb UTI increased from approx. 100 per 1,000 women in 1999 to nearly 150 in 2015.

Urinary tract infection is caused by bacteria, but women may also have bacteria in their urine for other causes. It is therefore important to inform women in order to ensure that they understand their symptoms correctly, and to let GPs know how to optimise diagnostic efforts to avoid over-treatment.

Younger and older people - 2 campaigns in 1

One part of the campaign targets women below 30 years of age. A film clip has been prepared that uses humour to spread the message that self-medication is not a good idea, and that you should not always pay attention to well-meant advice from your friends. The clip links to in-depth information at antibtiotikaellerej.dk (in Danish).

The second part of the campaign is designed to contribute to preventing urinary tract infections in elderly women at nursing homes. For this part of the campaign, a pamphlet will be sent out to social and healthcare assistants. The pamphlet contains messages - primarily about hygiene - that may serve to prevent urinary tract infections in elderly people.

Furthermore, information material has been sent to the GPs.

All campaign materials and further information are available (in Danish) at www.antibiotikaellerej.dk.

The organisers of the campaign include the Danish Ministry of Health, Statens Serum Institut, the Danish Health Authority, The Danish Medicines Agency, Danish Regions, The Association of Danish Pharmacies, the Danish Medical Association, Danish College of General Practitioners, Local Government Denmark and FOA.

(U.W. Sønksen, the Reference Laboratory for Antimicrobials Resistance and Staphylococci, B. Jørgensen, Secretariat of the Management)