National monitoring of gonorrhoea at Statens Serum Institut (SSI) is effected by reporting (submission of isolates) to the Laboratory Notification System (LNS), the Department of Microbiology and Infection Control, and by clinical notification to the Notification System for Infectious Diseases (NSID), the Department of Infectious Disease Epidemiology. Furthermore, as in 2014, EPI-NEWS 40/15, data were extracted from the Danish Microbiology Database (MiBa); a nationwide auto-updated database of all test results from the departments of clinical microbiology (DCMs), EPI-NEWS 45/13.

For gonorrhoea, this includes results from culture and PCR or other nucleic acid amplification technique (NAT), as most DCMs perform combined NAT for gonococci and Chlamydia trachomatis. In case of repeated episodes in a person, a new gonorrhoea case is defined as the passing of more than 21 days since the latest positive finding. 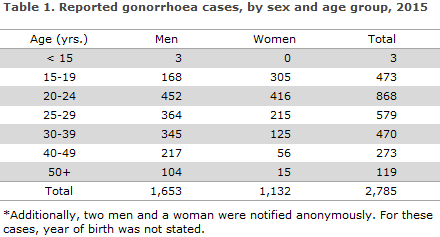 A total of 53 cases could not be retrieved from the MiBa, either because no civil registration number had been provided on the notification form (39 cases), or because the diagnosis had been made on the basis of clinical tests, epidemiology or microscopy the results of which are not added to the MiBa (14 cases). The distribution was different among the remaining 1,784 cases who were recorded both in the MiBa and had been notified with the NSID and/or reported to the LNS. In this group, a total of 1,025 (57%) had both a positive NAT and a positive culture, 460 (26%) had a positive NAT, but a negative culture, 157 (9%) had been tested only using NAT, and 142 (8%) had been tested only by culture. 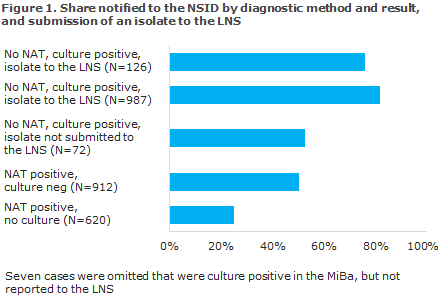 Three children were notified with gonorrhoea in 2015. One of these was a neonate who had been reported either to the LNS or the NSID, but for whom the MiBa made it clear that it was a case of gonococcal conjunctivitis transmitted at birth. The two other children had been notified to the NSID as sexually transmitted cases, and it was clear from the notifications that the cases would undergo further follow-up at a clinic of infectious disease medicine and at the Centre for Sexual Assaults (Center for Seksuelle Overgreb).

A considerable increase was seen in all areas except for South Jutland, Table 2. In 2014, South Jutland recorded the country’s highest increase in incidence (149%), EPI-NEWS 40/15, but the incidence decreased slightly in 2015. 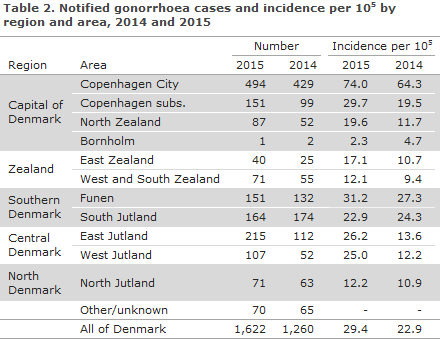 Among the 665 cases in women, six had become infected by women.
Furthermore, eight of the female cases were notified as having been established owing to examinations made in connection with pregnancies. 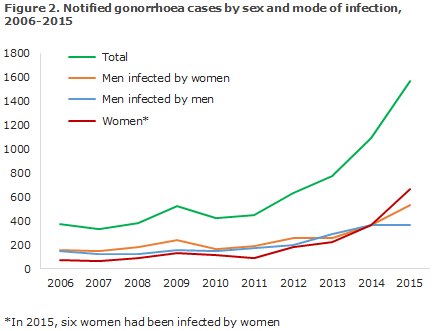 Of the 82 cases (62 in men and 20 in women) which were notified as having been acquired abroad, 14 were acquired in Thailand: 12 in HIM and two in men for whom the mode of infection was not stated.

Information about HIV status was available for 346 (95%) of the 364 men who were notified as MSM. Among these, 77 (22%) were HIV positives; 67 of whom were already known to have HIV. Among the 533 men who stated that they had been infected through heterosexual contact, 367 (69%) had been tested for HIV. Including two known HIV positives. Among 665 women, a total of 446 (67%) had been tested for HIV. Including one woman who had emigrated from Sub-Saharan Africa and who had previously been registered as a HIV positive.

In five cases, gonococci were established in culture from the eye: a 20-year-old and a 28-year-old woman, a 7-year-old boy and a 23- and a 54-year-old man. Additionally, a neonate was registered in the MiBa with a NAT-positive eye test.

In 2014, the Reference Laboratory received gonococcus isolates relating to a total of 1,127 cases of gonorrhoea from the Danish departments of clinical microbiology (DCMs). The isolates were tested for ciprofloxacine, azithromycin and ceftriaxone sensitivity by determination of MIC (minimum inhibitory concentration, mg/l) and for formation of penicillinase, which indicates high resistance to penicillin. 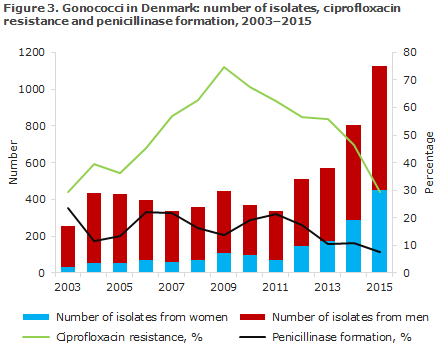 As part of a joint EU effort, the Reference Laboratory annually tests approx. 100 isolates against an expanded panel of antibiotics. In 2015 it was determined that among 110 isolates, 0% (6% in 2014) were resistant to cefixim (an oral cephalosporine) and 0% to spectinomycin (0% in 2014). None of the two latter drugs are marketed in Denmark.

Ciprofloxacine resistance occurred more frequently among MSM than among men notified as HIM, Table 3. Among HIM, transmission abroad was associated with a higher occurrence of resistance than transmission in Denmark, Table 3. 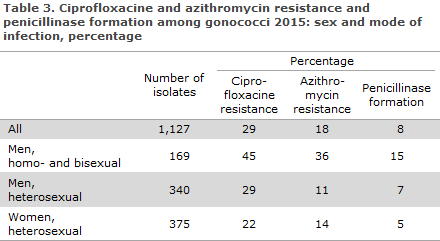 Several locations abroad, but not in Denmark, have reported ceftriaxone treatment failure and detection of ceftriaxone-resistant strains.

In late 2015, the Danish Health Authority published amended Danish guidelines on the diagnosis and treatment of sexually transmissible infections (in Danish). The standard treatment is 500 mg ceftriaxone intramuscularly and 2 g azithromycin orally, both as a single dose. The exception to this rule is uncomplicated urogenital gonorrhoea detected by culture. Here, the first-line treatment is ceftriaxone 500 mg intramuscularly alone, and - in case of documented susceptibility - ceftriaxone 500 mg orally as a single dose.

Gonorrhoea should not be treated with azithromycin alone. Doses of 1g carry a considerable risk of treatment failure and resistance development. It is important that all treated patients attend check-ups. Asymptomatic patients should have a NAT performed 2 weeks after treatment has been concluded, and any positives should be supplemented by culture and sensitivity testing - as is the case during primary diagnostics.

As in 2014, inclusion of data from the MiBa yielded a total number of cases that was 51% higher than the sum total reported to the LNS and the NSID. We consider that MiBa is accurate as it is complete and covers all parts of Denmark, and because the methods used for detection of gonococci are considered to have a high sensitivity and specificity.

According to the notifications, the majority of the cases had become infected in Denmark, and the second most frequent country of infection was Thailand.

As opposed to syphilis, which is mainly seen in MSM, gonorrhoea is now increasingly reported among heterosexuals. It causes concern that more cases of gonorrhoea are also seen in pregnant women, and health workers are encouraged to be attentive to gonococci as the cause of conjunctivitis in neonates, particularly in the initial 14 days of life. Gonorrhoeal conjunctivitis, which is increasingly being diagnosed in non-neonates, is a potentially very serious condition that shall be referred acutely to a specialist department and treated rapidly to maintain vision in the eye/eyes.

Thorough diagnostics remains an important measure to counter further spreading of gonorrhoea. Diagnostics should include sampling from all relevant anatomical locations (urethra, rectum, throat and in women also the cervix) along with barrier protection with by use of condom and partner tracking. Gonorrhoea can show few symptoms and be asymptomatic, and this is practically always the case for gonorrhoea of the throat and rectum. If the infection is located to these anatomical sites exclusively, and if it is not diagnosed, the patient constitutes an infection reservoir.

Nearly half of the NAT positives who had a culture performed tested negative. This may be due to the fact that gonococci are very fragile and will not tolerate prolonged transport in the mail system. In other cases, the infection may be in the early stages, which are, indeed, detectable with the more sensitive NAT, but not yet by culture. Finally, it is possible that a limited number of the positive NAT results are false positives.

This latter possibility is probably rare and as NAT is considered to have a good specificity, a positive NAT test shall always trigger immediate treatment. In the Danish Health Authority’s recommendations on the prophylaxis, diagnosis and treatment of STI (in Danish) immediate initiation of treatment is recommended following a positive NAT test, but after taking specimens from all relevant localisations for culture and susceptibility testing.

The Department of Infectious Disease Epidemiology has contacted a number of those who had ordered a test, which according to the MiBa later came back positive, but for which a notification was missing. It turned out that several of those who ordered the tests had misunderstood the text sent out with the positive NAT test result.

These texts may vary from one DCM to the next. In some cases the text has a wording similar to: “The result needs confirmation by culture” or “should be followed-up by a culture”, and several physicians had interpreted this to mean that the NAT result alone was not indication for treatment, but that they should await the result of the culture. A subsequent negative culture result was interpreted as if the patient did not suffer from gonorrhoea, and therefore no treatment of the patient was initiated and no notification submitted. The SSI is currently scrutinising more closely the cause and effects related hereto.