The national monitoring of gonorrhoea at Statens Serum Institut (SSI) is effected by reporting to the laboratory notification system (LNS), the Department of Microbiology and Infection Control and clinical notification to the Notification System for Infectious Diseases (NSID), the Department of Infectious Disease Epidemiology. 2014 saw 1,260 reported gonorrhoea cases in 1,211 persons as 37 persons were notified with 2 and 6 persons with 3 cases. A total of 851 (68%) were male and 409 (32%) were female cases.

No children below the age of 15 years were notified in 2014.

In addition to these 1,260 cases which were reported to the NSID and/or the LNS, the (Danish Microbiology Database, MiBa) recorded 657 unreported cases of laboratory-confirmed gonorrhoea. These cases occurred in 635 persons; 385 cases (59%) in men and 272 cases (41%) in women. The total number of gonorrhoea cases is therefore 1,917 of which 66% were notified to one or to both notification systems.

In the following, we only describe the 1,260 cases reported to the SSI. 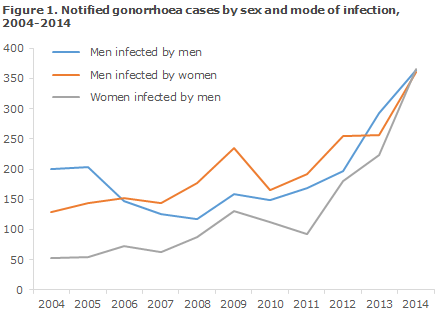 Of the 80 cases (69 in men and 11 in women) who were notified as having been acquired abroad, 17 were acquired in Thailand: 15 among heterosexually infected men and two in women. The second most frequent country of infection was the Philippines with 7 cases among heterosexually infected men, including 2 notified as having immigrated from the Philippines and 5 as Danes.

Information about HIV status was available for 344 (95%) of 364 MSM. Among these, 69 (20%) were notified as HIV positives; 60 of whom were already known to have HIV. Among the 361 men who stated that they had been infected through heterosexual contact, 237 (66%) had been tested for HIV. Including 2 (1%) already known HIV positives. Furthermore, one man for whom the route of infection had not been stated was notified as a HIV positive.

Among 360 women, a total of 227 (63%) had been tested for HIV. This figure included 2 (1%) who were notified as HIV positives; a Danish drug user and an immigrant from Russia. Both were notified as having been infected in Denmark, but the previous HIV status was known for neither of the two.

In one case, gonococci were found by culture from the eye of a 43-year-old man.

In 2014, the Reference Laboratory received a total of 804 gonococcus isolates from the Danish departments of clinical microbiology (DCM). The isolates were tested for ciprofloxacin, azithromycin and ceftriaxone sensitivity by determination of MIC (minimum inhibitory concentration, mg/l) and for formation of penicillinase, which indicates high resistance to penicillin.

As part of a joint EU effort, the Reference Laboratory annually tests approx. 100 strains against an expanded panel of antibiotics. In 2014 it was determined that among 109 strains, 6% (12% in 2013) were resistant to cefixim (an oral cephalosporin) and 0% to spectinomycin (0% in 2013). None of the two latter products are marketed in Denmark. 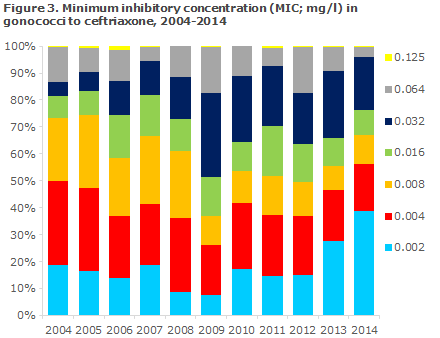 Based on the total numbers, no noticeable change in the probability of susceptibility to antibiotics was ascertained for any of markers, i.e. sex, sexual orientation and country of infection or HIV status. Thus, no markers were found that could be useful in the choice of antibiotic treatment.

Several locations abroad have reported ceftriaxone treatment failure and detection of ceftriaxone-resistant strains. The most recent European guidelines from the IUSTI (International Union against Sexually Transmitted Infections) recommend 500 mg ceftriaxone and 2 mg azithromycin given as a single dose. In Denmark, treatment failure in ceftriaxone treatment and strains with reduced sensitivity to ceftriaxone has yet to be documented. We expect that revised Danish guidelines will be published this year and that the revised guidelines will be in line with the IUSTI guidelines. In case of documented sensitivity to ciprofloxacin, a single dose of 500 mg may be given orally.

Gonorrhoea should not be treated with azithromycin alone. Doses of 1g carry a considerable risk of treatment failure and resistance development. It is important that all treated patients attend check-ups. Asymptomatic patients should have a NAAT performed 2 weeks after treatment has been concluded, and any positives should be supplemented by culture and sensitivity testing - as is the case during primary diagnostics.

The number of gonorrhoea cases recorded at the SSI follows an increasing trend. The increase was observed in all parts of Denmark, apart from East Jutland, and both among men (both heterosexually infected and homosexually infected) and women, and the number of cases was at same level in these three groups. The relative increase with respect to 2013 (EPI-NEWS 35/14) was larger among women (71%) than among men (41%).

By end of September, a total of 883 notifications and 822 gonococcus isolates had already been received at the SSI for 2015. This indicates that the increase may continue.

To supplement the notification systems administered at the SSI, we have extracted data from the MiBa for the first time in 2014. This produced a joint number of cases that was 52% higher than without the MiBa data. We consider that MiBa is accurate as it is complete and covers all parts of Denmark, and because the methods used for detection of gonococci are considered to have a high sensitivity and specificity.

The majority of the cases were notified as having been infected in Denmark; and among the remaining cases, the majority were infected in South-East Asia.

As opposed to syphilis, which is mainly seen in MSM, gonorrhoea is now increasingly being reported among heterosexuals, including also younger women. Furthermore, the prevalence of HIV among gonorrhoea patients deserves attention.

Like other sexually transmitted diseases, gonorrhoea is a so-called indicator condition for HIV which means that more than 0.1% of patients with a sexually transferred condition are co-infected with HIV. Among the notified patients whose HIV status was stated, 1% were co-infected with HIV among heterosexually infected men and women, and 20% among MSM. Physicians are therefore encouraged to test for HIV when diagnosing gonorrhoea, regardless of the mode of transmission. Furthermore, it is recommended to test for other relevant sexually transmitted diseases like syphilis, chlamydia and possibly LGV.

Thorough diagnostics remains an important measure to counter further spreading of gonorrhoea. Such diagnostics should include sampling from all relevant anatomical locations (urethra, rectum, throat and in women also the cervix) and partner notification. As the specificity of NAAT is considered to be good, a positive NAAT test should always lead to initiation of treatment without delay, but before treatment is initiated, samples should be taken for culture and resistance testing.

At present, substantial resistance issues have not been detected in Denmark, but it is important to follow developments, both for the individual patient and at the national level.

We have no knowledge of the transmission, etc., for the cases that were not notified, but found only in the MiBa. Since 2003 we have sent out reminders informing of the clinical duty of notification, as we send Form 1510 to the clinician when we receive a bacterial isolate from the diagnosing DCM. This is not possible for the cases in which the diagnostics are not followed up through submission of isolates. We hope that electronic reminders informing of the duty to notify will be able to be sent out via the MiBa directly to the physicians who order the tests, and that notification will be able to be done electronically.

Gonorrhoea monitoring was strengthened through the introduction of the civil registration number (CPR) on the notification form as from June 2015.
(S. Cowan, A. H. Christiansen, Department of Infectious Disease Epidemiology, S. Hoffmann, Microbiology and Infection Control)
30 September 2015.