In Denmark, invasive meningococcal disease (MD) is monitored via the clinical notification system (Form 1515) and by the Neisseria and Streptococcal Reference Laboratory, which receives meningococcal isolates from the departments of clinical microbiology.

In 2013, the Department of Infectious Disease Epidemiology received a total of 56 notifications concerning patients with MD. A reminder had to be sent out to ensure notification in 12 of the cases. Table 1 shows the distribution by area. 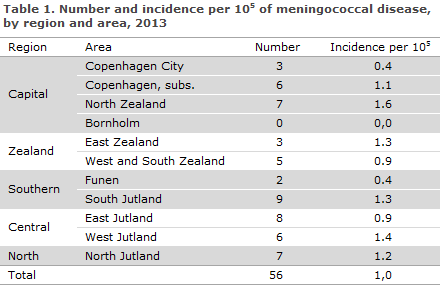 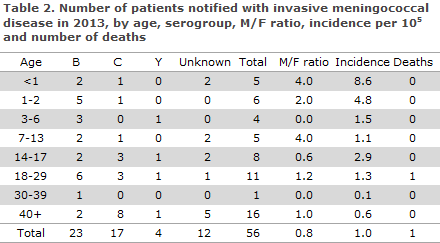 In 37 (66%) of the notified cases, meningococci were detected by culture. Twelve cases were detected by PCR, either alone or in combination with microscopy, and five cases by microscopy in conjunction with the clinical picture. One case was detected by meningococcal antibody testing; and in two cases, the diagnosis was based exclusively on clinical observations. A total of 49 cases were presumably infected in Denmark, five cases were infected in Germany, Great Britain, France, Poland and Spain, respectively; and in two cases the country of infection was unknown.

Mortality and sequelae from the disease

One patient with meningitis and septicaemia of group C died.

Information about sequelae was available for 49 patients. Thirty-nine (86%) of these patients experienced no sequelae. In 10 cases, the following sequale were reported; one had developed complete double-sided hearing loss, two had developed a hearing impairment, two suffered skin necroses, two experienced neurological symptoms in the form of reflex dystrophy and lacking sense of touch in the toes of one foot, respectively; and, finally, three had developed headaches.

Any physician receiving an MD patient for treatment shall immediately notify the case when clinical suspicion arises. Notification is by phone to the Danish Health and Medicines Authority's Medical Officers of Health in the region where the patient resides and in writing using Form 1515 to Statens Serum Institut, Department of Infectious Disease Epidemiology.

The 56 notified cases of MD was the lowest number recorded since monitoring of the disease began in 1980. As in previous years, the MD incidence was highest in the younger-than-1-year age group. As previously, the most frequent group was group B, but the number of cases in this group was low and stable (from 32 cases in 2011 to 19 in 2012 and now 23 in 2013).  As presented in Figure 1, the number of notified cases has followed a decreasing trend since the beginning of the 1990s. 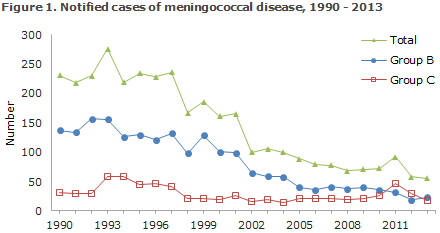 The number of cases caused by group C had once again decreased (from 46 cases in 2011 to 29 cases in 2012 and now 17 in 2013). However, group C still comprised a considerable share of MD because of the continually low level of MD caused by group B. In some other countries, 2013-2014 has seen an increased occurrence of MD with a specific subtype of group C among men who have sex with men (MSM). This has not been the case in Denmark.

In 2013, a vaccine against group B meningococci was approved by the European Medicines Agency (EMA). In 2014, the vaccine Bexsero® was approved in Denmark for prevention of MD in persons above 2 months of age. The vaccine is a multicomponent vaccine which will be offered to persons who have been in close contact with a person who was infected with MD caused by group B meningococci, but it can also be ordered from the SSI for other patient groups. The vaccine requires an issue permit from the Danish Health and Medicines Authority, EPI-NEWS 33/14.
(C. H. Suppli, P. Valentiner-Branth, Department of Infectious Disease Epidemiology; S. Hoffmann, Department of Microbiology and Infection Control)

2013 saw a total of 167 notified cases of purulent meningitis. Figure 2 and Table 3 show the distribution by aetiology and age. Meningococcal meningitis (38 cases) in 2013 is described elsewhere in this issue of EPI-NEWS. 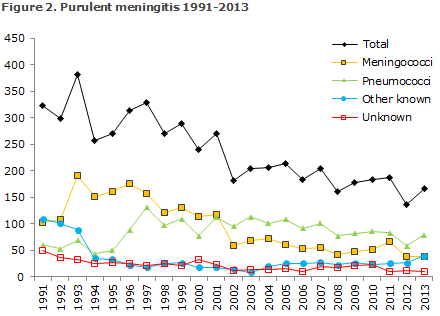 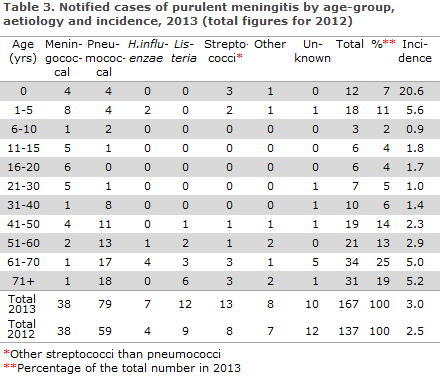 2013 saw a total of 79 notified cases of meningitis with Streptococcus pneumoniae. Among these, 73 were detected by culture, four by PCR and three by microscopy/clinically. For 58 patients, information was available on underlying conditions and/or dispositions:  Seven had alcohol abuse, five had a malignant condition, five had undergone neurosurgery, two had a dural defect; and four had tuberculosis, type 2 diabetes, chronic pulmonary disease or were splenectomised, respectively. For the remaining 35 cases, information was available on possible infection foci: 20 had an otogenic focus and/or sinusitis or other infection of the upper respiratory system and nine had pneumonia. One had a possible dental focus, one had recurrent endocarditis and four had other infections. For 68 patients, information was available on possible late sequelae of the condition: 13 died and three suffered severe neurological sequelae. Nine experienced cognitive sequelae such as difficulty concentrating or remembering and headaches, and one lost eye-sight on one eye, one had dysarthria and seven experienced hearing impairment. A total of 34 persons experienced no sequelae due to the condition.

Meningitis due to other streptococci than pneumococci was detected in 13 cases. Five cases caused by group A streptococci were recorded: Four adults (all above 50 years of age) of whom two had otitis media as focus. Both recovered without sequelae. The third had chronic pulmonary changes and also recovered without sequelae. The fourth adult patient suffered a fatal course following dural leakage. The fifth patient was a 2-year-old child who, apart from being born pre-term, had no known risk factors and in whom the condition ran a fatal course.

Group G streptococci were detected once in a 50-year-old woman with no known risk factors; the woman ran a fatal disease course.

S. salivarius and S. intermedius, respectively, were detected in the cerebrospinal fluid in two patients; one with a dural defect and probably a dental focus who ran a fatal disease course, and one with a brain abscess who had late sequelae in the form of affected memory.

Seven cases of H. influenzae were notified. Five cases in adults above 50 years of age. Two patients with otitis media, who both recovered without any sequelae. Two others with infections for whom no information on sequelae is available. An adult had a suspected entry focus from a cranial defect and suffered late sequelae in the form of impaired memory. In four of the five adult cases, typing is available; two non-capsular and one serotype E and F, respectively.

A total of 12 cases caused by L. monocytogenes were notified. All were infected in Denmark. All cases occurred in patients above 40 years of age, seven of whom were immunocompromised. Of the immunosuppressed patients, four had rheumatoid arthritis and were iatrogenically immunosuppressed; the three patients recovered without sequelae, whereas the fourth developed cognitive deficiencies. Two patients received chemotherapy for myelomatosis, and one patient had received a kidney transplant. All of these patients recovered without sequelae. For five patients, there were no known risk factors. Of these five, one suffered impaired hearing and another aphasia, whereas three recovered with no sequelae.

Staphylococcus aureus was detected in four adults and an infant. Two adults had endocarditis; one of the two had a possible dental focus and recovered, the other had a bursitis and ran a fatal disease course. The other adult patients were: one patient with neuro-surgical risk factors and another with no risk factors; both recovered without sequelae. An infant born with withdrawal symptoms recovered completely.

In a total of 10 cases, patients were notified on the basis of clinical tests and/or cerebrospinal fluid cell counts consistent with purulent meningitis, but without detection of bacteria by culture or PCR.
For eight patients, information on disease course and late sequelae was available: seven patients had no sequelae, and one suffered from affected short-term memory. Personal risk factors were reported for three persons; one with otitis media, one with alcohol abuse and one immunocompromised patient.

The number of notified cases of pneumococcal meningitis remains stable after decreasing from the 100 annual cases observed in the 2000-2007 period prior to the introduction of the seven-valent conjugate pneumococcal vaccine (PCV7) into the Childhood Vaccination Programme, EPI-NEWS 37a+b /07, to 82 cases in 2011, 59 cases in 2012 and now 79 cases in 2013. Among children below 5 years of age who are comprised by the pneumococcal vaccination programme, a lower level of pneumococcal meningitis is still being observed. Thus, 2013 saw eight culture-verified cases of pneumococcal meningitis and five in both 2011 and 2012, compared with an average 12 annual cases in the 2008-2010 period when PCV7 was used, and compared to the 19 annual cases seen in the 2000-2007 period, EPI-NEWS 19/13. Statens Serum Institut has prepared a report (in Danish) on pneumococcal vaccination of risk groups with increased risk of invasive pneumococcal disease who are not covered by the childhood vaccination programme. The report describes both the risk groups and the vaccines that are available in Denmark, and it provides advice on choice of vaccination regimen, including advice on booster vaccination. For more information, please see EPI-NEWS 40/14.
(C.H. Suppli, P. Valentiner-Branth, Department of Infectious Disease Epidemiology; S. Hoffmann, Department of Microbiology and Infection Control)