In Denmark, pneumococcal vaccination can be performed using a 13-valent conjugate vaccine (PCV13) and a 23-valent polysaccharide vaccine (PPV23). A recommendation for combination of these vaccines when vaccinating risk groups was previously described, EPI-NEWS 51b/12.

Statens Serum Institut has prepared a report on pneumococcal vaccination of risk groups at increased risk of invasive pneumococcal disease (IPD) who are not comprised by the childhood vaccination programme. The report is based on selected international scientific publications and recommendations.

The report describes both risk groups and the vaccines that are available in Denmark, and provides advice on choice of vaccination regimen, including advice on PPV23 revaccination. 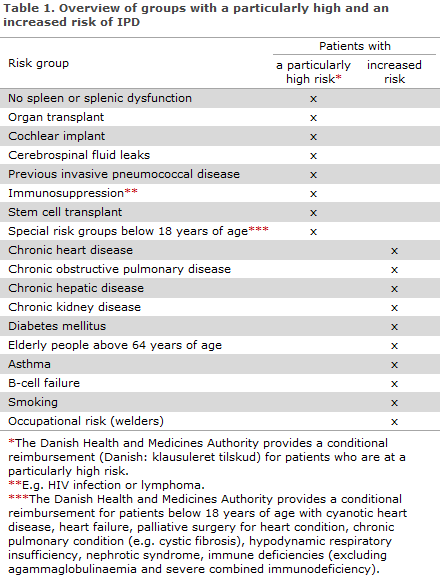 PPV23 is a polysaccharide vaccine covering a total of 23 pneumococcal types, including types not covered by the PCV13. PPV23 is expected to prevent approx. 70% of IPD in immunocompetent adults, but no strong documentation exists in support of its preventive capacity against pneumococcal pneumonia. In 2011-2012, the share of serotypes covered by the PPV23 was nearly 70% of IPD cases among persons above 64 years of age.

PCV13 is a conjugated polysaccharide vaccine and thus forms an immunological memory. In 2011-2012, the share of serotypes covered by the PPV13 was nearly 40% of IPD cases among persons above 64 years of age.

A recent and as of yet unpublished study (CAPITA) has explored the effect of PCV13 versus placebo for community-acquired pneumonia (CAP) in adults above 64 years of age caused by pneumococcal serotypes covered by the vaccine. The study comprises a total of approx. 85,000 persons.

At present, no clinical studies have been made on the effect of a combined (PCV13 followed by PPV23) pneumococcal vaccination programme aimed at the elderly. Such recommendations are therefore based on a theoretically additive effect of the two vaccines, but the evidence to support this is limited.

Adults who have undergone a liver transplant

Elderly people above 64 years of age
There are two regimes to choose from:

All remaining risk groups are vaccinated with a combination of PCV13 and PPV23 as described in Figure 1.

The need for revaccination with a dose of PCV13 has not been established.

The antibody level after use of PPV23 returns to the pre-vaccination level after 5-10 years, but the duration of protection is subject to considerable individual variation. Repeated PPV23 vaccinations at too short intervals between the first and second vaccination may lead to hyporesponsiveness, meaning that repeated vaccinations provide a lower immune response than the primary response.

No such cases have been observed at intervals exceeding 5 years between two consecutive PPV23 vaccinations. Revaccination in the presence of a high antibody level may cause considerable local side effects including swelling and pain. Ten years after the primary vaccination, the risk of severe local reactions of revaccination is considered to be small and equal to the risk associated with primary vaccination.

In general, revaccination can therefore be conducted 10 years after primary vaccination without prior measurement of antibodies. In patients who are non-responsive to repeated PPV23 vaccination, revaccination will typically not yield improved coverage, EPI-NEWS 46/02.

Persons with uncertain vaccination status should have their antibody levels measured prior to vaccination, R-no. 695. Measurement of antibodies is done by submitting a blood sample to the Department of Microbiological Diagnostics and Virology, SSI. Advice on booster vaccination is issued along with the result of the test. 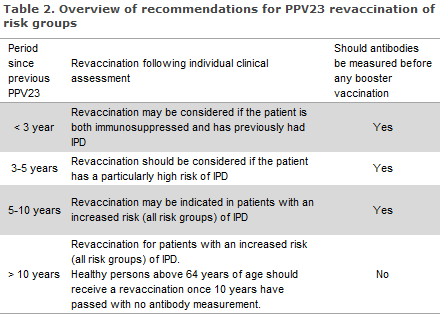 Several countries, including England and the US, recommend a combined vaccination programme with PPV23 and PCV13 for persons with certain chronic conditions that are associated with an increased IPD risk. In the US, it was decided to offer healthy elderly people above 64 years of age such a combination programme.

This recommendation is not based on evidence that PCV13 and PPV23 should be combined, as such studies have not been performed. The decision is based on the fact that the two vaccines have different degrees of coverage for the serotypes that cause IPD, and they also trigger immune responses that are different with regards to types covered why an additive effect seems probable.

Since May 2014, four persons have had the rabbit fever bacteria Francisella tularensis detected following tick bites in Denmark.

Tularaemia is observed sporadically in Denmark. The primary source of infection is game (hares), but other sources include contact with infected meat, surface water or dust containing the bacteria. Vector-borne infection (primarily from mosquitos and ticks) has been described sporadically.

Tularaemia has not previously been associated with tick bites in North Zealand, but this year has seen a remarkably high number of ticks in Denmark and these can, among others, transmit F. tularensis (in Danish)

Infection from game occurs in the hunting season and during subsequent skinning of e.g. frozen animals. The incubation period is often < 1 week, and the diagnosis should be considered in connection with unexplained fever following tick bites or following contact to rodents and other wild animals, sores at the bite site, or lymphadenopathy and myalgia.

The clinical suspicion can be confirmed through culture and/or PCR from sores/glandular material, and by seroconversion from negative to positive serology or a titre increase between two specimens taken at a minimum 14-day interval. Tularaemia can be treated with either gentamicin or ciprofloxacin for 10-14 days, EPI-NEWS 7/8-13.