A total of 319 (91%) of the cases were notified to the Notification System for Infectious Diseases (NSID), the Department of Infectious Disease Epidemiology (DIDE). A total of 191 (54%) of the cases were both notified to the NSID and a specimen had been submitted to the Department of Microbiological Diagnostics and Virology, the SSI (DMDV), whereas 128 cases (36%) were notified to the DIDE and diagnostically confirmed at another laboratory. Additionally, 33 cases (10%) were diagnostically confirmed at the DMDV, but not notified with the NSID. Finally, the NSID received 32 notifications which the DMDV established were not current syphilis. 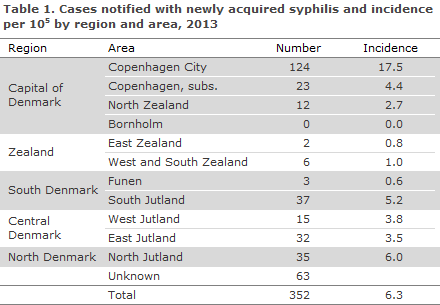 Consequently, the total number of cases recorded in the Copenhagen area was 147. However, as the majority of the cases with unknown residence were diagnosed in Copenhagen, the number may reach 210. This is lower than in 2012 when 236 cases were recorded. In contrast, the total number of cases recorded for Jutland in 2013 was 119 compared with 64 in 2012.

A single case of congenital syphilis was notified in 2013. The child was born in Denmark by a woman who screened negative to syphilis at the beginning of her pregnancy, but who became infected after her screening.

Figure 1 presents the number of persons notified with sexually transmitted syphilis since 2000. The country of infection was stated for 270 (85%) of those notified, 16 females and 254 males. Among males, a total of 222 (87%) were infected in Denmark, and among girls/females the corresponding number was 11 (69%).

Information on HIV status was available for 269 males (96% of MSM, 77% of heterosexually infected males and 73% of males for whom the mode of infection was not stated), and for 17 (81%) females.

Among the 79 HIV positive males, 12 had been diagnosed with HIV and syphilis simultaneously (11 MSM and 1 male for whom the mode of infection was not stated), whereas 49 were known HIV positives prior to their current syphilis diagnosis. One non-Danish female was known to be HIV positive. For the remaining 18 cases, there was no information on the time of their HIV diagnosis.

The nationwide decrease in the number of cases observed in 2012 compared with 2011 has not continued. The number of notifications is now in line with that observed last year,EPI-NEWS 34/13.

The majority of the 63 cases for whom no residence was stated were diagnosed in Copenhagen, but even if all of these are counted as part of the Copenhagen area, the total number was lower than that observed in 2012. Conversely, in 2013 nearly twice as many cases of syphilis were recorded in Jutland as in 2012. In the Capital Region of Denmark, the confirmatory tests were not only performed at the DMDV.

The decrease in the Greater Copenhagen area may therefore be due to some cases not being notified if they are not confirmed by the DMDV which routinely submits a NSID notification form to anyone ordering a test. Nevertheless, the increase observed in Jutland is probably real.

In Denmark, syphilis continues to occur primarily among MSM, and - in contrast to gonorrhoea - no substantial increase has been seen in the number of cases among heterosexually infected persons.

Syphilis is a marker of unprotected sex, and therefore also a marker of the risk of HIV infection and of infection with other sexually transmitted diseases. It is therefore still important that MSM who are tested for syphilis also be tested for HIV,EPI-NEWS 46/09, lymphogranuloma venereum (LGV), hepatitis B & C, and gonorrhoea.

Correct diagnosis and staging are important for the treatment of the individual syphilis patient as well as for monitoring efforts. Tentative diagnoses based on positive serological screening results should therefore be verified trough extended serological tests.

Until now, the vaccine has only been available from the SSI at the expense of the region and provided that the person placing the order had a provider number. In practice this means that only GPs could order the vaccine.

At larger departments and rehabilitation centres, persons covered by the executive order can receive the vaccination without a prior appointment. In these cases, it is not possible to order the vaccine beforehand to the person in question. It may therefore prove practical to store a limited supply of the vaccine, and then order the free vaccine after the vaccination has been administered.
(Department of Infectious Disease Epidemiology)