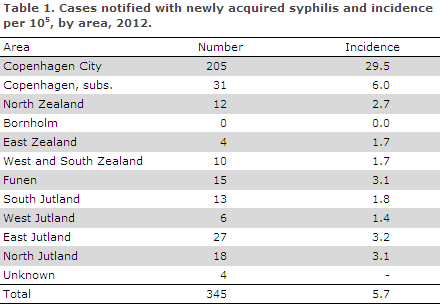 In 29 (9%) of the cases, a specimen had been submitted to the DMDV only and in 18 (5%) cases infection had only been notified to the NSID.

The number of notified syphilis cases has decreased since 2011, Figure 1. The decrease was observed in all parts of Denmark apart from the City of Copenhagen, where the number of cases increased slightly (from 200 to 205, EPI-NEWS 37/12). 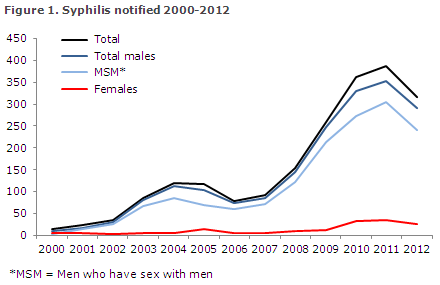 No cases of congenital syphilis were notified during 2012. Syphilis antibodies were detected in seven neonates whose mothers had been diagnosed as syphilis positives in the pregnancy screening. In all seven cases, only maternal antibodies were detected. Nevertheless, treatment was performed in two of the children as the mothers had received treatment so late in the course of the pregnancy that full treatment effect could not be guaranteed.

The increase in the incidence of syphilis which had characterised the previous five years did not continue through 2012. Various efforts have been made with a view to raise awareness about the testing and management of syphilis − not least the regular testing of HIV-positive patients by the infectious medicine departments, and in 2012 confirmatory syphilis diagnostics had not yet been taken home by the Danish Regions.

On that basis it is presumed that the SSI has recorded most cases. Consequently, the observed decrease seems to reflect a real reduction in the number of new cases. This assumption is further supported by the fact that the decrease was observed in all parts of Denmark, except for Copenhagen.

As temporary upwards or downwards trends are frequent, it is, however, too early to assess if the increasing trend has been turned around or if the temporary decrease will be replaced by another increase as observed in 2006 relative to 2005. Preliminary numbers for 2013 do not indicate a major increase in 2013.

In Denmark, syphilis continues to occur primarily among MSM, and − in contrast to gonorrhoea − no substantial increase has been seen in the number of cases among heterosexually infected persons.

No cases of congenital syphilis were notified in 2012, which is probably owed to well-functioning pregnancy screening, which, on average, has yielded 6-9 cases annually among pregnant women since the (re)introduction of syphilis screening in 2010, EPI-NEWS 22/13.

Syphilis is a marker for unprotected sex, and therefore also a marker for the risk of HIV infection and infection with other sexually transmitted diseases. It is therefore still important that MSM who are tested for syphilis also be tested for HIV (EPI-NEWS 46/09), lymphogranuloma venereum (LGV), hepatitis B & C, and gonorrhoea.

PCR testing is expedient for detection of Treponema pallidum in chancre material and is often positive before antibodies can be detected. Correct diagnosis and staging are important for the treatment of the individual syphilis patient as well as for monitoring efforts.