Thus, the number of notified syphilis cases has increased further since 2010, Figure 1. 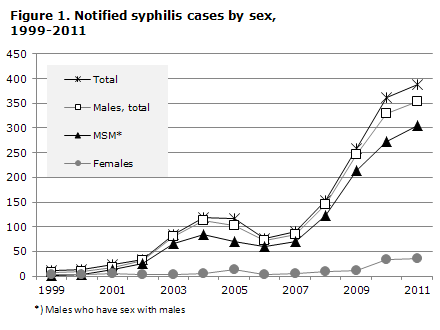 A single case of congenital syphilis was notified. The parents of the child, born in the beginning of 2010, were of non-Danish origin. The mother had not been screened for syphilis as part of the general pregnancy screening, which only came into force as from January 2010. The child was diagnosed with congenital syphilis in May 2011 upon suspicion raised due to its development.

Demography of the notified cases

Table 2 shows the distribution by part of country. As in previous years, many cases (52%) were observed in Copenhagen City. 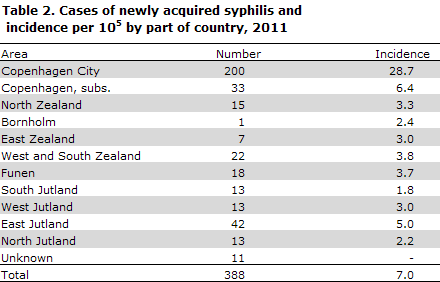 2010 saw the first case since 2003 of congenital syphilis in Denmark, and in 2011 another child was notified. The mother of the child had not formed part of the general screening introduced in the beginning of 2010.

Congenital syphilis may cause serious late sequelae. As the disease does not always present at birth, it is particularly important to be aware of the diagnosis when the mother has not been screened as part of the general screening. Late-stage congenital syphilis may manifest as damage to the central nervous system, hearing, bones and teeth.

Even though syphilis is seen among heterosexuals, the disease continues to be more widespread among MSM, and the increase in this group continued in 2011, in line with the trends observed in other European countries, e.g. Germany, www.eurosurveillance. Nevertheless, the first semester of 2012 has seen considerably fewer notifications than were recorded at the same point in time during the previous year. It is not known at present whether this is owed to a real decrease in the number of cases or to a decrease in notifications and/or diagnostic activity.

In 2011, the general screening of pregnant women has yielded six female syphilis notifications, EPI-NEWS 14-15/12. This number is in line with 2010, when seven cases were notified.

Syphilis is a marker of unprotected sex and therefore also a marker for risk of HIV infection and of infection with other sexually transmitted diseases. It is still essential that MSMs who are tested for syphilis also undergo HIV testing, EPI-NEWS 46/09. Furthermore, they should be tested for lymphogranuloma venereum (LGV), hepatitis B and C and gonorrhoea.

Correct diagnosis and staging are important for the treatment of the individual syphilis patient as well as for the monitoring efforts. This means that tentative diagnoses based on positive screening results should be verified trough extended serological tests. PCR testing is expedient for detection of Treponema pallidum in chancre material and is often positive before any antibodies can be detected.