The bacterial enteropathogens are notifiable via the laboratory notification system. For some of the bacteria, notifications are supplemented by concurrent submission of isolates to the SSI Reference Laboratory. VTEC infections, cases of haemolytic uraemic syndrome (HUS) and Shigella infections are also notifiable on Form 1515. The most recent report was provided in EPI-NEWS 12/13 and for Shigella in EPI-NEWS 3/12.

Figure 1 presents the number of cases recorded with Campylobacter spp and zoonotic salmonella serotypes. Salmonella was reported in EPI-NEWS 11/14 and is only included in this issue to provide a basis for comparison. In 2013, a total of 3,766 (67 per 100,000) Campylobacter spp infections were reported; i.e. nearly the same number as that recorded for the preceding year (a 1% increase). 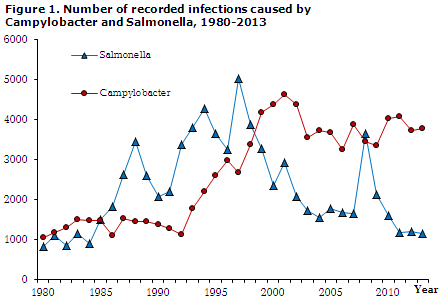 Campylobacter isolates are not normally speciated or typed, and isolates are rarely submitted to the SSI. However, a total of approx. 200 isolates are received annually from the departments of clinical microbiology in Aalborg, Odense and Slagelse for use in the monitoring of antibiotics resistance. In this material, the species distribution for 2013 was 96% C. jejuni and 4% C. coli. In 2013, no outbreaks with campylobacter were observed.

In line with the preceding years, the SSI has made an effort to collect information about any infection during foreign travel for a subgroup of the patients. Specifically, phone interviews were performed continually with patients notified from the clinical microbiology departments of Odense and Aalborg, EPI-NEWS 12/13.

For 2013, travel information from these two catchment areas was available for 560 campylobacter cases, among which 226 (40%) were acquired abroad. When all travel information is included, with 92 registered infections Turkey was the country where most patients had been infected, followed by Spain, Thailand and India with 77, 61 and 29 registered infections, respectively. The age-specific incidence is presented in Table 1.

Via the laboratory notification system a total of 192 VTEC cases (3.4 per 100,000) were registered, which was nearly unchanged compared with 2012, when 193 cases were recorded, Figure 2. Bacterial isolates were available for 186 VTEC cases - including four patients who each had two different types of VTEC. Distribution by O groups is shown in Table 2. Isolates are continuously typed using PFGE (Pulsed-Field Gel-Electrophoresis) with a view to discovering outbreaks. No general VTEC outbreaks occurred in 2013. 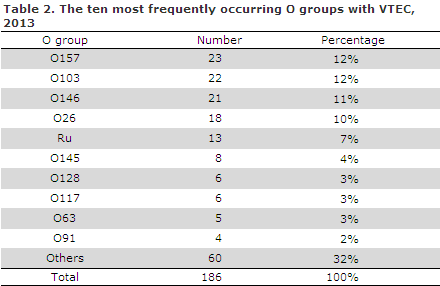 A total of 11 HUS cases were notified, which is one case more than in 2012, when a HUS outbreak was observed, EPI-NEWS 45/12. The median age was 25 years (range 0-73 years), including four children below the age of two years. Seven HUS cases were confirmed as being VTEC cases. The isolates from all of these cases tested positive to the virulence genes vtx2 and eae; they comprised six serotypes.

A total of 345 cases (6.2 per 100,000) of Yersinia enterocolitica were registered; a 19% increase from 2012, Figure 2. Since 2012, Yersinia enterocolitica isolates have generally been submitted to the SSI for biotyping. The 2013 distribution on biotypes and serotypes is presented in Table 2. Among the submitted isolates (approx. 60% of the isolates were available for typing), slightly more than half (54%) were of biotype 1A.

Via the laboratory notification system, a total of 109 Shigella cases (1.9 per 100,000) were registered in 2013. That equals a 4% increase compared with 2012 when 104 cases were registered, but 17% less than in 2011 when 148 cases were recorded, Figure 2. As in the previous years, the majority of the infections in 2013 were caused by S. sonnei, which accounted for 64 infections. A total of 20, five and one infections with S. flexneri, S. boydii and S. dysenteria were recorded, respectively, whereas 19 isolates were not species-tested. The infections were divided equally on age-groups, Table 1.

The majority of cases acquired in Denmark were S. sonnei (50%) and S. flexneri (31%). One case of S. flexneri was presumably due to occupational infection. The case in question concerned a hospital employee. In 2013, no Danish food-borne outbreaks of Shigella were reported. However, five cases of S. sonnei were associated with an outbreak at a hotel in Tunisia and one S. sonnei case formed part of a major Nordic outbreak primarily with Salmonella Enteritidis at a hotel in Turkey, EPI-NEWS 38/13. 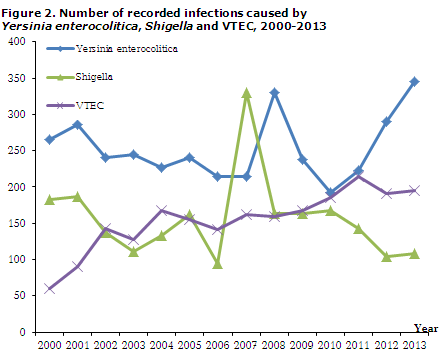 Figure 2 shows the number of registered Yersinia enterotolitica, Shigella spp and VTEC cases in the 1980-2013 period. For further information, please see ssi.dk/data which links to "Overvågning i tal, grafer og kort” (site in Danish) at the webpage of the SSI. Here, the surveillance data relating to bacterial intestinal infections are available, and can be broken down by time, place and person.

The number of Campylobacter infections remains high. For a number of years, Campylobacter has been the most frequent cause of bacterial gastrointestinal infections, and it occurs about three times as frequently as Salmonella. A similar picture is seen in other parts of the Western World, and generally there seems to be a considerable infection pressure in most European countries.

The epidemiology of Campylobacter is presently not fully understood, and we do not have a good understanding of the relative importance of the various routes of transmission or effective intervention methods. The primary source of infection, however, is still believed to be chicken meat, and observing classic kitchen hygiene precautions is essential in private kitchens - specifically, fresh chicken meat should be handled carefully as a few drops of juice from raw chicken can cause infections. The majority of infections occur sporadically, and 30-40% of patients are presumably infected abroad.

The number of Yersinia enterocolitica cases have remained largely stable for a number of years. In the past three years, however, the number of cases has followed an increasing trend. The majority of the submitted isolates are of biotype 1A. The pathogenic potential of this type has yet to be established, but it has traditionally been considered a non-virulent or moderately virulent type.

The number of Shigella infections was at a relatively low level, and no Danish outbreaks were recorded. Four in every five cases were associated with foreign travel.

The number of VTEC infections were at par with the levels observed the preceding years; and contrary to 2012, EPI-NEWS 45/12 and 2011 EPI-NEWS 27-33/11, no general outbreaks were seen. VTEC infections are monitored closely due to their capacity to induce HUS. Assessed on the basis of the virulence gene profile and the O group, VTEC isolates can be classified as being either low risk or HUS-associated (link in Danish).

A report based on data from more than 2,000 Danish VTEC patients from the past 15 years has shown that 71% were infected with low-risk VTEC. Through additional subtyping of the vtx2 genes, the number of HUS-associated cases was determined to be only 11%. This is of importance for the handling of VTEC patients. Current practice in this field is described here (link in Danish).
(S. Ethelberg, L. Müller, C. Kjelsø, K. Mølbak, Department of Infectious Disease Epidemiology. K.E.P. Olsen, F. Scheutz, E.M. Nielsen, M. Torpdahl, Department for Microbiology and Infection Control)

The first case was a one-year-old child, who had not yet received MMR vaccination due to its young age. No source of infection has been identified for this child. The child presented with a fever, cold and coughing at the end of January 2014. A rash followed approx. ten days after the initial symptoms. In this course, the child was seen both in general practice, in the paediatric emergency department (referred from 1813) and at a hospital department. When the laboratory diagnostics came back positive, any exposed persons were informed. At present, another three cases have been confirmed in which the infection can be traced back to the initial case (the "index patient") and another ("tertiary") case has been detected who was infected by one of the "secondary" cases.

In the same period, measles has been detected in a man in North Zealand who had stayed two weeks in the Philippines on vacation. The Philippines are currently affected by a major measles outbreak caused by genotype B3, and presumably the patient was infected there. Subsequently, another adult woman who was on the same journey was diagnosed with measles. Presumably, the woman was infected by the man, but local infection in the Philippines is also a possibility. There is information of newly imported measles cases from the Philippines to a range of countries, including Australia, Canada, Japan, New Zealand, England and the USA.

To date, genotyping has been performed in specimens from five of the Danish patients (including the index patient) and all were of genotype B3. This genotype was previously observed in Danish measles patients, most recently in 2012. Additionally, genotype B3 was also established in England and on a cruise vessel from Italy in February of 2014. In the beginning of 2014, another two outbreaks were observed in Sweden. These counted a total of seven patients all of whom had genotype B3. None of the Swedish patients had been travelling, and a primary source of infection could not be identified.

Among the seven Danish cases, five are children below three years of age, all of whom are unvaccinated. The two younger adults were born in the period prior to the introduction of the MMR vaccine in 1987, and both have only received a single MMR vaccination.

For a detailed description of measles, please see The SSI's measles theme page.

On suspicion of measles, the following samples should be taken:

The primary form of prevention is MMR vaccination. MMR vaccination is normally offered to all children at 15 months and four years of age. Vaccination may be given from the age of 12 months, e.g. when a measles case has been confirmed in the vicinity.

There is no upper age limit for MMR vaccinees, but vaccination is only free of charge for persons below 18 years.

Denmark participates actively in the efforts to eliminate measles (and rubella) in the WHO's Europe Region no later than in 2015.

The prerequisite to achieving this is a sustained minimum vaccination coverage of 95% for the two MMR vaccinations. This objective has not yet been achieved for any birth year since the MMR vaccine was introduced in 1987. Particularly, the shift from 12 years to four years of age for the second MMR vaccination has caused the coverage to recede, see www.ssi.dk/data.

With a view to preventing or mitigating disease, MMR vaccination may be given to non-immune contacts within three days and normal human immunoglobulin within six days after certain exposure to infection. Certain exposure is defined as contact with a laboratory-confirmed or epidemiologically linked MMR case. Expenses are covered by the regional authorities.

Immunoglobulin may be ordered at pharmacies or from the SSI. When acute dispatch from the SSI is needed, the transportation costs are covered by the regional authorities.

The current outbreak stresses that physicians should pay particular attention to the diagnosis in children and younger adults who present with measles symptoms.

The outbreak also demonstrates how important it is that persons who are under suspicion of having measles avoid staying in waiting rooms with other patients, whenever possible. Instead, these patients should be seen late in the day; if possible, house calls should be made. Furthermore, it is important that the doctors referring suspected measles cases to a hospital inform the hospital of the suspicion so that the patient may be isolated upon arrival.

When giving advice on travel-related vaccinations, the physician should include the MMR vaccination in his or her travel vaccination recommendation if the vaccinations were not already given or if the traveller has not had measles previously.

Measles cases complying with the disease definition, i.e. cases that are laboratory-confirmed or epidemiologically linked to a measles case, are notifiable to the Department of Infectious Disease Epidemiology at the SSI and to the local Medical Officers of Health (MOH). To aid preventive efforts, notification should be forwarded without delay.
(L.K. Knudsen, P.H. Andersen, Department of Infectious Disease Epidemiology, J. Fonager, S. Midgley, F. Nees Engsig, T. Kølsen-Fischer, Department of Virology, M. Brasholt, MOH Copenhagen)